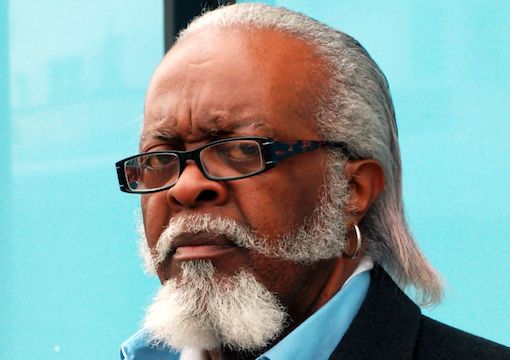 The Week’s Most Snatching, Hatching, and Pumpkin-Patching Headlines

IT’S THE GREAT PUNKIN’, GNARLY BROWN
History has a habit of repeating itself, especially for those too stupid to learn from their mistakes. Like the GOP.

The 2010 New York gubernatorial race became goober-natorial when an oddball black named Jimmy McMillan grabbed 15 minutes of fame (short of the 24 minutes and a mule he demanded) by running as the Rent Is Too Damn High candidate.

McMillan had one platform (guess).

Certain Republicans (Roger Stone…yes, that Roger Stone) saw in the “populist” McMillan (a male stripper who once tried to climb the Brooklyn Bridge brandishing a knife) the legendary “black standard-bearer” the GOP has long prophesied will one day arrive to deliver the party to eternal victory.

Sadly, just like every year with Linus, the Great Pimpkin always disappoints. McMillan turned out to be obsessed with Jews, claiming they ran the slave trade and aren’t real Jews anyway—blacks are the real Jews.

Last week, Tucker Carlson declared that he’s finally found the Moses (Malone) who’ll lead the GOP to the promised land: Kanye West. Unfortunately, “Ye” followed his interview with Tuck by stating that “the Jews” are out to get him and Jews aren’t real Jews anyway—blacks are the real Jews.

Kanye said similar things during the interview, but they were edited out, along with his claim that impostor robot children are haunting his mansion (unbeknownst to Carlson, “excised” video can be copied). Meanwhile, Ye’s BLMFF Candace Owens declared that it wasn’t anti-Semitic for him to tweet that he’s going “death con 3 on Jewish people” because “defcon” is “a defensive measure” (she also misrepresented an email from Chase to make it appear as though the bank canceled Ye over his comments).

And if all that weren’t enough, the impostor robot children got aborted by Herschel Walker.

ISMAILIS VS. SHEMAILIS
Hamtramck, Mich., was founded by Polish immigrants. It was a very Polish city. They used to have a library, until someone colored in the book. They closed their hall of records because the needle broke. They didn’t levy taxes, because no one in town was Jewish. They once tried to elect a standing committee, but folks didn’t want to be on their feet all day. There’s no city seal because they couldn’t build a big enough pond.

But these days, Hamtramck has gone from 90 percent Polish to 90 percent Muslim (in 2013 it became the first Muslim-majority city in the U.S.).

Why Muslims would flock to a city with “ham” in the name is a mystery.

What’s not a mystery is that the akbars of Hamtramck and nearby Dearborn (42 percent Arab) are not pleased with the fact that schools in greater metro Detroit are going tranny. Last week furious Muslims stormed a school board meeting, demanding the removal of LGBT books and lesson plans. According to the Detroit Free Press, protesters carried signs saying “Stop brainwash our children,” “Quit grooming students, you sexually perverted animals,” “Homosexuality Big Sin,” and “If democracy matters, we’re the majority.”

When a tranny counterprotester named Sam Smalley told the Muslims they were hurting his feelings, one hetero haji replied, “Go cry!”

“All of a sudden, that kindergarten textbook Muhammad Has Two Daddies doesn’t seem like such a swell idea.”

“Try to make our kids ‘genderqueer’? Ummah kick your ass.”

The Free Press tried to blame “conservative Christians” for “influencing some in the city’s Muslim population.” Sure, because if there’s one thing Muslims are, it’s easily swayed by other faiths. Remember that time an Israeli asked Hamas, “Oy, enough with the terrorism already, okay?” and Hamas was like, “Whatever you say, boss—the Jewed abides.”

For leftist school boards, the Muslim protests pose a dilemma; normally, tranny propagandists aren’t up against people who have a habit of getting homicidal when they get mad. All of a sudden, that kindergarten textbook Muhammad Has Two Daddies doesn’t seem like such a swell idea.

Although, to be fair, these days Islamists don’t refer to their favorite pastime as “beheading,” but “stature reassignment surgery.”

SICK OR TREAT
Of course we need cheap illegal labor! Who else will pick the fruits and vegetables? The next time you buy low-priced California-grown lettuce, grapes, or strawberries, thank immigrants for the bounty.

And also for the syphilis.

Migrant laborers in California’s Central Valley are dealing with backs that aren’t just wet, but covered in sores. Syphilis is ripping through the state’s agriculture belt like a Cantinflas film: painful to experience and not funny. As reported in the Orange County Register last week, state experts can’t figure out why this disease, once considered nearly eradicated in California in the 1990s, has bounced back, predominantly among migrant laborers.

These “state experts” can’t put two and two together that the increase parallels the state’s open-border policies, because these “state experts” have degrees from state schools. Elementary logic eludes them, but they can name all 57 genders and recite every poem about the death of Emmett Till.

The virulent syphilis strain tearing through the valley leaves its victims bald, with a stooped gait and pockmarked face. Severity of symptoms are gauged on a chart from “Edward James Olmos in real life” (treatable) to “Edward James Olmos as Jaime Escalante” (terminal).

The state is having trouble controlling the epidemic because most of its STD funds have been earmarked for monkeypox. So because gays can’t keep it in their pants, your Trader Joe’s lettuce will make you die like Al Capone.

But while gays have no plans to curtail their poxing, they are quite intent on making sure you don’t hurt their feelings. Last week Yahoo! News ran a piece telling Americans not to dress up as “monkeypox” for Halloween. “No, you’re not going to make fun of folks suffering from a painful, uncomfortable viral disease,” ace scribe Tyler Schoeber (who looks rather diseased himself) lectured. “Do better.”

Fortunately, syphilitic Mexican costumes are still okay. And the best part is, they come free of charge with a box of California strawberries.

So when Biden, AOC, and Vice President Cackles lionize these unwanted caravaners as not only heroes but better than native-born Americans, they’re giving a big head to the worst possible people.

Case in point, last week a Guatemalteco named Yoni Barrios was parading around Vegas. And why not parade? An illegal, he’d been caught-and-released a dozen times, even avoiding charges of domestic violence, because again and again the system told him how special he is. Too special to deport; better than any stupid “citizen.”

While walking by the Wynn Hotel on the Strip, Barrios spied a couple of beautiful white showgirls. He strode up to them and pompously announced, “I’m a chef! Take a picture with me.”

In the Southwest, a Hispanic who works in a restaurant kitchen is about as common as a Jew who doesn’t. And when the showgirls rejected the offer to have their photo taken with Chef Boyardeeportee, “Bobby Flay” became “Bobby Fillet,” as Barrios sliced up the ladies with a kitchen knife, killing one.

Though he’s being held without bond in a Clark County cell, Barrios has already been offered his own cooking show by Hulu.

AND NOW FOR SOMETHING COMPLETELY DEFERENT
Poor John Cleese; he’s seen comedy come full circle. Monty Python’s Flying Circus was a rebellion against the vaudeville-esque British humor of old. In the 1960s, music hall “my wife” jokes were seen as cornball and unhip:

So Monty Python gave the world the Spanish Inquisition, Scotsmen and blancmanges, penguins on the telly, and silly walks. It was seen as heretical—blasphemous, even—because it tossed out the rules of comedy (setup, punchline). The Pythons were rebels.

And now here’s Cleese, turning 83 next week, being pilloried in the press as a heretic and a blasphemer…for telling the exact jokes he once rebelled against for being too safe.

“John Cleese Has Officially Gone Over to the Dark Side,” screamed the MSN headline. He’s “gone right-wing.”

Why? Because he tells “wife jokes” (Cleese has spent much of the past decade joking about his expensive divorces), which are now considered “sexist, misogynist hate-speech.” These days, if you tell a “take my wife” joke in London, you’ll get a visit from Chief Superintendent Harry “Snapper” Organs, who’ll book you for violating British speech codes.

Cleese, the insurgent, was too successful. His “revolutionary” comedy helped take down the old guard of upper-class twits, and they’ve been replaced by a new guard of tranny Paki noggy-woggy twits who are fine with Scotsmen and blancmanges, but don’t dare joke about anyone who’s not a white hetero male. Indeed, last week Cleese was cut off mid-sentence while being interviewed on the BBC when he ventured into criticism of wokeness.

Shut up and do your silly walk, boomer.

Cleese’s former Python mate Eric Idle, always deferential to the woke mob, told The Guardian that people like Cleese just need to go off and die. “We are no longer speaking to today’s generation. We’re old farts. We should be left to go quietly to bed and watch the telly.”

Hopefully there’s no penguin on it.

Or reruns of Benny Hill, a show once seen as hackneyed, but one that’s become, in today’s climate, as dangerous to the social order as the Pythons were a half century ago.