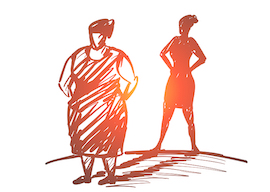 The Week’s Most Jarring, Marring, and Scarring Headlines

SHOULD FAT-SHAMING BE A HATE CRIME?
Throughout human history until perhaps the past five years, everyone thought it was hilarious to make fun of fat people. Not only were they deemed unattractive by everyone except perverts and men whom normal women refused to sleep with, they were sluggish, lazy, unhealthy, smelly, and couldn’t carry their own weight—pun intended—during barn-raisings because they’d die of heart attacks within the first five minutes.

But progressive ideology is nothing more than a form of morality inversion—everything that was once considered sacred is now profane, and everything that was once considered disgusting is now sanctified and untouchable.
Despite her ridiculous name, actress Jameela Jamil is quite fetching and doesn’t appear to have an ounce of body fat on her frame. Possibly in an attempt to appear empathetic, she has hoisted the Fat Cause upon her shoulders and is urging that “fat-shaming”—i.e., telling fat people that they’re hideous, smelly, and unhealthy—should be considered hate speech:

Fat-phobia is real, it is pervasive and prevalent and is damaging the mental health of millions…one of our main goals is to work towards a policy change that means this way of talking about people’s bodies is considered hate speech.

Ms. Jamil took particular exception to a tabloid photo of blubbery lesbian rapper Queen Latifah and her rolls of sagging suet photographed at a beach with the caption “BEACHED WHALE.” According to Jamil:

She’s a self made multimillionaire. A success in music, hosting and acting. A business woman. An icon who came up in a time when black women were so entirely unwelcome in media. Especially one with curves….This is 100 percent hate speech.

One hundred percent, you say? Did you measure that with your Hatenometer, ma’am? Yes, Queen Latifah is a successful fat black woman. But those aren’t “curves”—those are bloats. The only hate speech in that caption was that committed against whales, who likely chafe at being compared to Queen Latifah.

STUDY: 40% OF YOUNG AMERICAN WOMEN WANT TO LEAVE THE USA
A recent Gallup poll finds that more Americans desire to leave the USA than ever before, and a plurality of them want to go to Canada, which deserves them.

Compared to the George W. Bush years (11%) and the Obama years (10%), 16% of Americans polled say they are so upset with the current state of affairs in this once-great nation, they have an itch to pack up their bags and head elsewhere.

Most significant is that during prior administrations, there was no gender gap between those who wanted to leave. But now, 20% of women are thinking of taking their vaginas elsewhere, compared to 13% of men.

A full 30% of those under 30 years old say they wish to vamoose, but that stat represents 40% of young women and only 20% of young men.

GERMAN RIGHT-WING LEADER BEATEN AND LEFT FOR DEAD
Have you ever noticed that the mainstream press never uses the term “far-left”?
The Alternative for Germany Party (Alternative für Deutschland,  usually abbreviated as “AfD”) simply espouses a Germany that is for Germans, which is a position that throughout history would have been considered “sensible” or “moderate” or “natural” rather than “far-right,” but you may not know that the Germans lost a big war 74 years ago and no longer enjoy the right to define terms, so the party is routinely smeared as “far-right.”

“Have you ever noticed that the mainstream press never uses the term ‘far-left’?”

Party Chairman Frank Magnitz was ambushed and attacked by three people after leaving a New Year’s party in what is being called an “attempted assassination.” He was knocked unconscious after being beaten in the head with a large piece of wood. A grisly photo posted on the party’s Facebook page shows a giant gaping wound in Magnitz’s head.

Only a few days later, an explosion occurred outside the party’s headquarters in Saxony, damaging doors, windows, and nearby vehicles.

They’re making it nearly impossible for Germans to simply be German. Does no one remember what happened the last time this was the case?

I’ve become addicted to drugs and the worst one at that. Ed Buck is the one to thank. He gave me my first injection of crystal meth.

Ed Buck is a white Democratic donor who has contributed to the campaigns of Hillary Clinton, Jerry Brown, and L.A. Mayor Eric Garcetti.

In July 2017, Gemmel Moore died of a methamphetamine overdose at Buck’s house. In the wake of his death, several other young black males came forward accusing Buck of meeting them on hookup sites and injecting them with drugs. Police did not file charges against Buck in Moore’s death due to “insufficient evidence.”

Last Monday another dead black male was wheeled out of Buck’s West Hollywood home. Buck’s attorney Seymoure Amster is calling it yet another “accidental overdose”:

From what I know, it was an old friend who died of an accidental overdose, and, unfortunately, we believe that the substance was ingested at some place other than the apartment….The person came over intoxicated…[Buck is] shaken up. All indications are he had nothing to do with this tragedy.

This time around, we’re hoping that Buck is required to explain to a judge and a jury why he had nothing to do with this tragedy.

WEATHERMAN FIRED FOR MLK FLUB
While broadcasting on Friday, January 4, a New York meteorologist named Jeremy Kappell said “Martin Luther Coon—King—Park” when referring to a park in downtown Rochester. He quickly corrected himself, insists he is not a racist and did not intentionally utter a racial slur, and says that no one in the studio even noticed what he had said:

What happened on Friday, to me, it’s a simple misunderstanding. If you watch me regularly you know that I tend to contain a lot of information in my weather cast, which forces me to speak fast and unfortunately I spoke a little too fast when I was referencing Dr. Martin Luther King Jr. So fast to the point where I jumbled a couple of words. In my mind I knew I mispronounced, but there was no malice. I had no idea the way it came across to many people….It was a mispronunciation and I could tell that I was fumbling the words a little bit. The moment I realized that I was fumbling I immediately put the emphasis on King, not knowing that I had made a major error. I did what all of us journalists do. I moved on.

But there is to be no moving on for white people who say “coon” these days. Kappell was promptly fired. He went on to insist on Twitter that he would never insult the greatest civil-rights leader our galaxy has ever known.

For some unknown reason, TV personalities Don Lemon and Al Roker—both of whom have likely been called coons at some point in their life—came forward to forgive Kappell.

To us, he needs no forgiveness. He is the funniest weatherman we’ve seen in a coon’s age.

FRENCH GREEN PARTY MEMBER: EUROPEANS NEED TO BREED LESS
Yves Cochet is a wrinkled frog who co-founded the French Green Party in 1984. He currently serves on the European Parliament.

In an interview with a left-wing French paper, he recently urged France to enact policies that would discourage the native French from breeding in order to encourage Muslim immigration to France:

I suggest reversing our policy that encourages births, by inverting the logic of benefits payments for families. The more children you have, the fewer benefits you receive to the point of disappearing entirely after the third birth!… The rich countries, like France, are the first that need to decrease demographically. They are the ones with the most polluting lifestyles. Most of all, limiting our births would allow us to better receive the migrants who are knocking at our doors.