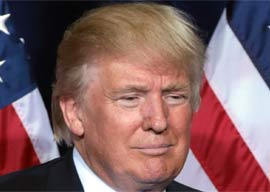 TRUMP SIGNS IMMIGRATION BILL, THEN ROLLS IT UP AND STABS SUPPORTERS IN THE BACK WITH IT
The main promise of Donald Trump’s 2016’s presidential campaign, the gleaming white carnation on his tailored suit—“We’re going to build a wall, and Mexico is going to pay for it”—will never come true. On Friday, Trump made sure of it.

After a belligerent Friday morning press conference in which the president declared a state of emergency in order to allocate funds to build the wall, on Friday afternoon Trump signed an omnibus bill that ensured the wall would never be built. Not only that, the bill ensures the country will be flooded with more illegal aliens than ever.

Regarding the wall for which Trump had originally demanded $25 billion before backpedaling down to $5.6 billion, the bill doesn’t even deliver what the Democrats had agreed to, which was a puny $1.6 billion. It only allocates $1.375 billion—enough to build about 55 miles of bollard fencing rather than a concrete wall—and it limits construction strictly to the Rio Grande Valley section of the border. And even within that section, construction is prohibited on federal and state lands. Regarding the rest, it requires local authorities—which in South Texas are uniformly Democratic and largely controlled by Mexican drug cartels—to agree to the wall’s construction, which is like asking black people to agree that slavery benefited them. It will never happen.

Section 224(a) of the bill prohibits any illegal alien who is sponsoring an “unaccompanied” minor illegal…or who claims they may, you know, one day sponsor one…or who currently lives with an unaccompanied minor illegal…from being deported. This provides a massive incentive for illegal aliens currently bleeding the public coffers to call up minors from south of the border as little baby human shields against deportation.

The bill Trump signed also allocates a record $3.4 billion for refugee resettlement. It doubles the permissible number of unskilled seasonal workers who can apply for H-2B non-agricultural visas. It reduces the number of border detention beds by 18%. It adds $40 million to a program that moves asylum seekers from the border to the country’s interior, where they are almost always released.

BLOGGER SUES TWITTER AFTER BEING BANNED FOR DECLARING THAT MEN ARE NOT WOMEN
A mere ten years ago, publicly declaring that men aren’t women and that women don’t have penises would have been an affirmation that one was sane. But oh, how time flies when you let the fruit flies run the asylum.

Meghan Murphy is a Canadian blogger who identifies as a leftist feminist and socialist, but apparently that is no longer sufficient to prevent the Egalitotalitarian Ban-Hammer from crushing your skull these days.

It took only two tweets for Twitter—whose CEO, Jack Dorsey, recently admitted on a podcast that he doesn’t believe his website needs to “optimize for neutrality” when choosing whom to ban—to deplatform Murphy.

How are transwomen not men? What is the difference between a man and a transwoman?

According to the diktats of Newspeak, “transwoman” is a term that proclaims, against all chromosomal evidence, that a man who claims he’s a woman is actually a woman. A mere decade ago, these delusional people were known as “transvestites.”

“Oh, how time flies when you let the fruit flies run the asylum.”

But the tweet that got Murphy unpersoned on Twitter involved her using the word “him” to describe a man who claims he’s a woman. The man in question was involved in some sort of kerfuffle over “genital waxing at beauty salons.”

On Monday, Murphy filed a lawsuit against Twitter Inc. in a California court, claiming that she was discriminated against for expressing a belief that the majority of Americans still share—i.e., that one’s gender is determined by one’s genitals at birth. Murphy also showed some solidarity with the Trans-Exclusionary Radical Feminist (TERF) contingent by expressing that the entire trans delusion may be an impediment to feminism:

The whole situation destroys women’s rights. I don’t even see how we can uphold women’s rights if there is no cohesive definition for women.

Feminists are annoying and delusional as it is, but they can’t compete with trannies in either category. As much as it pains us to say it, we’ll side with the feminists on this one.

In similarly depressing and soul-laceratingly ironic news from the UK, a university student has been banned from a “free speech” debate for intrepidly declaring that “women don’t have penises.”

MAJORITY OF CALIFORNIA RESIDENTS WANT TO LEAVE THEIR HIGHLY DIVERSE STATE
At some point in the 1940s or 1950s, California must have been a wonderful place to live. But whereas its population was under 10 million at the end of World War II, the Golden State is now crammed with 40 million people, and that’s assuming they’re counting illegals, which is doubtful. The state’s quotient of whites is now only half of what it was in 1970; Hispanics now outnumber Caucasians by more than 50%. It is currently the nation’s most ethnically diverse state, and how you feel about that says a lot about you.

Despite the fact that it postures as a socially egalitarian paradise, California is saddled with the nation’s fifth-highest rate of wealth inequality. It’s basically a handful of billionaires and their Mexican servants.

A new poll conducted in January by Edelman Intelligence has found that 53% of the state’s residents are considering leaving California due to high taxes and the exorbitant cost of living. The poll also found that 62% of respondents said that California’s best days are over.

RUSSIAN OFFICIALS PONDER THE JAPANESE MODEL FOR REDUCING OBESITY
In 2008 the dying nation of Japan enacted a law designed to curb obesity among adults over 40, colloquially known as the “Metabo-law,” which would subject people to weight counseling and ultimate “reeducation” if their waistlines measured above a certain level—“33.5 inches for men and 35.4 inches for women.”

Now Russian authorities, in their quest to make their entire noble nation as fit and sexy as President Vladimir Putin, are studying the Japanese model. Anna Popova, Chief State Sanitary Officer of the Russian Federation, expounds on the Metabo-law:

If during the annual inspection a citizen is found with a waist size exceeding the norm, the government imposes restrictions according to which he is obliged to attend regular counseling sessions. Fines for companies that do not care about the health of workers, can reach $19 million.

Popova says that the Russian Federation has also scrutinized a New Zealand law that requires potential immigrants to present certification that they have a body mass index of 35 or lower.

We’re not big on laws, but we admire any effort to make the world less fat. Nearly four out of ten adults globally are overweight. This worldwide epidemic of unbridled gluttony must stand no more!

MULATTO PRESIDENTIAL CANDIDATE CAUGHT FIBBING ABOUT HIP-HOP
Although very few people are aware of it, a black pro wrestler who masqueraded as a war paint-wearing Ugandan headhunter named Kamala was born as James Harris. So he was the original “Kamala” Harris.

The new pretender to the Kamala Harris throne is a California Senator who’s the daughter of a black Jamaican man and an Indian woman who seeks to become our nation’s second mulatto president. Her light skin, verbal erudition, and the fact that she married a white man have many people questioning her “blackness.”

On a radio show last Monday, Harris sought to firmly establish her blackness by claiming that in college, she smoked weed while listening to the music of convicted rapist Tupac Shakur and suspected murderer Snoop Dogg.

Harris graduated from Howard University in 1986 and from law school in 1989.

Her blackness remains in question. We’ll stick with Kamala the wrestler.