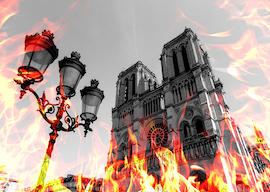 The Week’s Most Defamatory, Inflammatory, and Confirmatory Headlines

IS FRANCE BURNING?
One needed the sentience of a rock to be able to ignore the deep symbolism behind the specter of the Notre Dame Cathedral burning last Monday in Paris—here was a presumably ineffable symbol of France, of Europe, and of Christendom that was nearly 1,000 years old, and it was immolating before the world’s eyes. Pundits are straining with every last sphincter muscle to throw cold water on any speculation that the blaze was the result of arson, especially at the hands of Islamists.

What almost escaped notice entirely is the fact 875 churches were vandalized last year in France, and over 1,000 the year before amid a wave of what’s being dubbed “militant secularism,” possibly because newsmen choke on the words “Islamic extremism.” According to Republicans MP Valerie Boyer, “Every day, at least two churches are profaned.” This includes burglaries and graffiti and smashed glass and feces smeared on walls.

Still, we are counseled not to focus on these anti-Christian attacks because to do so would steal some of the thunder from Jewish victims of all the alleged anti-Semitic attacks raging through France, many of which are presumed not to have actually been committed by Jews.

And we must never forget the rancid stench of Islamophobia that pervades Paris and which led to such atrocities as the Charlie Hebdo massacre and the Bataclan theater attack. Nothing causes Muslims to go on shooting sprees like the idea that Muslims go on shooting sprees.

If anyone is to be blamed for the fire, it is obviously France’s Christians. In a series of interviews given for Rolling Stone, one reputed expert of something-or-other called the cathedral “a deep-seated symbol of resentment” whose renovation must “be dealt with critically” in order to more adequately represent a “divided France.”

In fact, a prominent Israeli rabbi blames the fire squarely at the Christians who helped build Notre Dame. Taking it upon himself to speak for all Jews, Shlomo Aviner explains that Christianity “is our number one enemy throughout history. [They] tried to convert us by arguments and by force, carried out an inquisition against us, burned the Talmud, expulsions, pogroms. Western anti-Semitism draws from Christianity’s hatred of the ‘murderers of God.’ It also had a role in the Holocaust.” Aviner suggests that God waited nearly 800 years after Christians staged a mass burning of Talmuds to strike back and avenge his Jewish children in his inimitably wrathful way.

BRET EASTON ELLIS SAYS YOU’RE A BIG BABY WHO NEEDS TO GET OVER IT
Bret Easton Ellis is a gay author who gets away with saying things that gay people aren’t supposed to say, because then if they call him a “faggot,” they’re the ones who look bad and he’s a victim and the whole sick cycle starts again and everybody winds up with AIDS.

In a recent interview, Ellis related how he had to tell his boyfriend to shut the hell up about Donald Trump and get the frick over it or he’d have to eat his Hot Pockets without the mayo and red pepper on them like he likes them.

“If you have to wonder why people hate you, it’s probably too late to change their minds.”

Ellis says that the millennial generation, which he refers to as “Generation Wuss,” suffers from “childlike fascism” and “demented narcissism” that lead to “oversensitivity, their sense of entitlement, their insistence they were always right despite sometimes overwhelming proof to the contrary, their joint tendencies of overreaction and passive-aggressive possibility.”

He also describes his internal dialogue when listening to someone spew out the same moldy old Trump Derangement System they’ve been vomiting since June of 2015. See if it doesn’t sound exactly like what’s going on in your head when you hear one of these loons start howling at Venus:

[I’d] stare at them while a tiny voice in the back of my head started sighing, You are the biggest fucking baby I’ve ever fucking heard in my entire fucking life and please you’ve got to fucking calm the fuck down — I get it, I get it, you don’t like fucking Trump but for fuck’s sake enough already for fuck’s sake.

What he said—you really need to calm the heck down.

CHASE BANK SHUTTING DOWN “ALT-RIGHT” ACCOUNTS
In case you were naïve and stupid and gullible and weak-brained enough to think that Donald Trump’s election would ease pressure on publishers of dissident-right materials, think again, Beaver Cleaver, because we might as well have elected Stalin.

If they aren’t banning you from social media and deplatforming all of your publications, they’re making it impossible for you to feed yourself. Now comes word that Chase Bank is suspending the bank accounts of anyone they consider “Alt-Right,” which from a recent phone conversation with a Chase representative appears to be anyone who ever thought a kind thing about Donald Trump. Chase recently suspended the account of a black male leader of Gavin McInnes’s Proud Boys organization, which goes out of its way to distance itself from the slightest whiff of “racism” or “anti-Semitism” but winds up getting written down on Nazi and terror lists anyway.

It should be illegal for banks to refuse service to anyone based on their beliefs. Until it is illegal, we wish for all bankers to suffer from acute insomnia with a side dash of painful rectal itch.

HATRED AGAINST JOURNALISTS ON THE RISE: BAD NEWS?
The problem with stories by journalists about how journalists are facing an unprecedented and entirely inexplicable wave of hatred is that journalists, by definition, are congenitally incapable of ever pondering why anyone might hate them.

A recent story by a “media watchdog” called Reporters Without Borders claims that all this baseless and irrational hatred is being whipped up by populist tinhorns who’ve created a climate where journalists, like everyone else on the planet, need to be concerned for their safety.

After all, it’s not as if almost the entire American media-industrial complex just finished a two-year run of nonstop lying about Trump and Russia, so why the hell is everyone getting paranoid about the good men and women of the fifth estate?

A good rule to live by: If you have to wonder why people hate you, it’s probably too late to change their minds.

ONLINE ACTIVISTS HARASS MEDICAL RESEARCHERS INTO SILENCE
A generation or two ago, the term “Do It Yourself” was popularized in the indie-music scene. It seemed like a nice creed until one pondered the ugly fact that hardly any of the “yourselves” that were “doing it” had a lick of talent.

The same thing applies to social media—everyone has an opinion. But everyone also has an anus, and almost without exception, it is better formed than their opinion is.

Medical researchers are now finding it increasingly difficult to conduct their studies due to the fact that social media is awash with fanatics who wish to kill you if you dare to, oh, suggest that their physical ailment might have a psychological cause. A recent article from Reuters details the travails of researchers into chronic fatigue syndrome who are endlessly buffeted by patients who blanch at the idea that it’s all in their heads and therefore retaliate with volleys of calumny and abuse.

Simon Wessely, a professor of psychological medicine at King’s College London, says that even though he stopped conducting online research into chronic fatigue syndrome years ago, he is still subjected to “relentless internet stalking,” accused of playing “pathetic ego driven games,” and is charged with killing patients due to his insistence that there may be a psychological cause of the ailment.

The least that can be learned from this is that chronic fatigue syndrome is caused by online trolls.

MURAL REMOVED BECAUSE IT FEATURES ALL WHITE CHILDREN
When one takes into account the fact that in 1930 the USA’s population was 90% white, it doesn’t seem all too scandalous to consider that a WPA mural painted during the Great Depression would feature an entirely white group of children playing outside in the winter. After all, the nation was almost completely white at the time, and everyone knows that black people are terrified of snow.

Still, the principal at a Chicago middle school recently removed the mural after self-appointed representatives of the institution’s 45-percent-nonwhite student population complained that the painting didn’t show people who looked like them, and if they can’t see paintings of people who look like them, how are they going to perform well on math tests, even though, if you want to get all technical, Asian students don’t need to be adequately represented in pictorials in order to score well in math, so maybe you should quit blaming your innate evolutionary cognitive deficiencies on racist paintings.

BOY TOSSED THREE FLOORS FROM MALL RAILING
The national news made hardly a peep at the ghastly story of a five-year-old boy being tossed from the third-floor balcony at Mall of America in Minneapolis.

Even after falling forty feet, the boy, Landon Hoffman, survived. His friends and family have raised over a quarter-million dollars toward his medical bills.

Twenty-four-year-old Emmanuel Deshawn Aranda, a Minneapolis resident with a long history of arrests, has been charged with attempted homicide regarding the incident.

We find no need to list the race of the victim and perpetrator. The fact that you haven’t heard about this story tells you all you need to know.