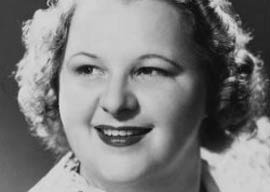 The Week’s Most Perverted, Diverted, and Disconcerted Headlines

SPORTS TEAMS BAN KATE SMITH FOR “PICKANINNY” AND “DARKIES” SONGS
Kate Smith was a fat white woman beloved for decades by Americans for her rendition of “God Bless America,” which she belted out with the gusto of a woman who can swallow a dozen donuts in one bite and still have room for a sip of milk. Her version received heavy play at sporting events across the fruited plains, most notably during the seventh-inning stretch at New York Yankees games and during Philadelphia Flyers hockey games.

But because it has become increasingly evident that every white American born before 1985 was a coon-baiting Nazi, both teams have decided that La Smith has to go.

Smith, you see, will remain eternally guilty of being the chanteuse behind 1933’s song “Pickaninny Heaven,” which includes horrifying lyrics about “colored children” who are accused of enjoying “great big watermelons.” Not having been beaten or shot to death for that crime against humanity, she brazenly went on to record 1939’s “That’s Why Darkies Were Born,” which explained that African Americans were born to pick cotton. She also endorsed a “Mammy Doll” the same year. The doll was apparently offensive because it encouraged children to hug and show affection to a simulacrum of a black woman.

Neither the Yankees nor the Flyers will be playing “God Bless America” at games anymore, despite the fact that the song doesn’t mention darkies or coons or pickaninnies or eggplants or toads or bones or any of the other terrifying terms that white Americans have used to oppress black people for centuries, names that have been proved to prevent black Americans from averaging anywhere close to 100 on IQ tests. The Flyers have taken it one step further and have removed a Kate Smith statue that stood outside their arena.

These people will never be happy until everyone is as unhappy as they are.

WORLD: 100+ CHURCHES ATTACKED MONTHLY
No matter your feelings about Christianity, it’s hard to deny that the Western press is far less sympathetic toward attacks on Christians than they are toward even the slightest disparaging comment about Muslims and Jews.

According to a website called Open Doors USA, slightly over 100 churches and Christian buildings are burned or attacked monthly worldwide. Nearly 350 Christians are murdered for their faith every month as well.

• nearly a quarter-billion Christians worldwide—or one in nine—“experience high levels of persecution.”

• North Korea is the most dangerous country on earth for Christians.

• In 8 of the top 10 countries for persecution of Christians, the animus is fueled by Islam.

We suspect that the press looks the other way regarding these global atrocities not so much because they hate Christians but because, despite global demographic trends, they still tend to see “Christendom” as synonymous with “whiteness.”

STARBUCKS PROVIDES A SAFE SPACE FOR JUNKIES
Ever since a pair of impertinent and (we’re assuming) malodorous black males caused a huge stink at a Philadelphia Starbucks last year because they insisted on loitering and using the bathroom despite having refused to purchase anything, the massively and undeservedly successful bitter-coffee chain has opened its bathrooms to anyone who desires to befoul them, all of it, naturally, in the name of “inclusiveness.”

“Neither the Yankees nor the Flyers will be playing “God Bless America” at games anymore.”

Because everyone is equal and there is no difference between a billionaire inventor who wishes to pee-pee in a Starbucks bathroom and a strung-out homeless junkie who desires to shoot up in a Starbucks bathroom, any murmurs that there is a difference between the two will be countered with violence and endless shaming, and you don’t want that, although we secretly do. However, one California Starbucks manager—and believe us, we’re desperately trying to identify him and get him fired:

I think the bathroom policy has definitely changed the store’s environment. It’s great that Starbucks wants to try and include everyone, but that means that they include absolutely everyone.

Now comes word that in order to make the world a safer place for the poor underpaid Starbucks employees who risk getting infected with Hep-C or HIV by getting pricked with a used needle while merely taking out the trash, Starbucks has installed needle-disposal boxes in 25 US markets.

What kind of person does heroin in a coffee shop, anyway? We don’t seem to ever recall anyone sipping a cappuccino in an opium den.

BAR THAT IMPOSED 18% “GENDER SURCHARGE” ON MEN CLOSES DOWN
Although many feminists claim that they only seek equality and don’t hate men, you can’t trust these fem nazis as far as they can spit.

A café in Australia that caters to vegan feminists—an amalgamation of two of the most supremely unpleasant identity groups in the galaxy—made headlines back in 2017 when it announced that it would impose an 18% “gender surcharge” against men due to some illusory “wage gap” that is said to exist in Australia as well. What they never tell you about these “wage gaps” is that if women were actually willing to accept wages that were 18% lower than men, not a single man would be employed. They also never seem to tell you that women may not make as much money as men, but all studies prove they spend more money than men. They also never dare to mention that at least in the USA, women control more personal wealth than men do.

That’s why it is with sadistic glee that we announce the Handsome Her café in Melbourne—which levied this oppressive 18% surcharge on male customers—is closing down today!

It’s a good day to be a man in Australia.

“FAT SEX THERAPIST” SAYS FITNESS IS FOR NAZIS
Sonalee Rashatwar is a morbidly obese urine-colored woman who diverts her natural shame for being fat and ugly into convoluted Critical Theory gibberish about how “Thinness is a white supremacist beauty ideal.”

The self-described “Fat Sex Therapist” was recently able to be forklifted out of bed in order to give a lecture about “radical fat liberation” where she claimed that it made sense that the man who shot up two mosques in Christchurch, New Zealand was a fitness instructor because Nazis were into fitness and likely would have punched anyone who used the phrase “radical fat liberation” non-ironically:

It also makes sense that a disgustingly fat woman would concoct absurd philosophical defenses of her physical repulsiveness because it’s easier than doing the roughly 20 million sit-ups it would require for someone such as Sonalee Rashatwar to become remotely desirable to men.

JEWISH FAMILY ACCUSED OF PAINTING SWASTIKAS ON THEIR OWN BUSINESS
After the Holocaust and Christ’s crucifixion and the stereotypes in that one Spike Lee movie and all those Henry Ford newspaper columns, it is undeniable to everyone except foaming-at-the-mouth anti-Semites that Jews have suffered more persecution than any other group in history combined. This is why it is especially horrific and saddening when Jews persecute themselves.

Three Jewish family members in Winnipeg—that’s in Canada, we think—are being charged with public mischief after allegedly painting swastikas on the walls of a café they owned.

When news first broke of the alleged hate crime, the executive director of the Jewish Heritage Centre of Western Canada proclaimed in a loud, honking voice:

I think that the attack on the BerMax Caffe is the most violent and vicious anti-Semitic attack [in Winnipeg] and certainly in recent memory.

Not to be outdone, the Jewish Federation of Winnipeg called the incident “’the most brazen act of anti-Semitism that we’ve seen in our community, and perhaps ever.”

But alas, it appears to have been wishful thinking on their part. According to Winnipeg police chief Danny Smyth:

We found evidence of a crime. It just wasn’t a hate crime. I am hugely disappointed and, frankly, angry that this family has used hate and racism in such a disingenuous way.

We, however, are neither disappointed nor angry. We aren’t even surprised.