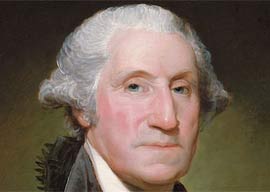 The Week’s Most Dissipated, Obliterated, and Eviscerated Headlines

GEORGE WASHINGTON MURAL TRAUMATIZES STUDENTS
Nonwhite children at George Washington High School in San Francisco were horrified to encounter a 1936 mural that depicts, as fate would have it, George Washington, who just so happens to be the school’s namesake, as we’ve already mentioned. In one image, Washington appears to be walking past some dead Injuns. In another, he stands near some slaves who are, as luck would have it, performing slave labor.

Some half-assed and totally unnecessary panel of witch hunters who call themselves the “Reflection and Action Group” have determined that the mural “traumatizes students and community members” and have urged that it be wiped out—just like the white man tried to do with the Injuns and blacks, although as we all know, he failed miserably, or we wouldn’t even be having this discussion. According to the group’s conclusion:

We come to these recommendations due to the continued historical and current trauma of Native Americans and African Americans with these depictions in the mural that glorifies slavery, genocide, colonization, manifest destiny, white supremacy, oppression, etc. This mural doesn’t represent SFUSD [San Francisco Unified School District] values of social justice, diversity, united, student-centered.

It’s miraculous, but these types have a way of almost making slavery and oppression sound fun by comparison.

LET’S DUMP TRASH ON THE WHITE GUY
Ever since a 2006 Southern Poverty Law Center smear piece attempted to argue that pro-white Atlanta-based lawyer Sam Dickson somehow oppresses black people merely by buying and selling real estate for a profit, Dickson has faced increasing scorn and harassment in the ATL, which is easily the most pro-black major city in the USA.

Dickson—who, it must be admitted, is often seen photographed with other white people who say that it’s OK to be white—was recently targeted by anonymous antifascists who called him a “white supremacist” and backhandedly urged people to dump trash on his properties. Around 80 flyers, designed to appear as if they were officially issued by the City of Atlanta—which has been denied by both Dickson and the city’s black female mayor—were posted in the city’s Lakewood Heights section and read thusly:

People have been dumping trash on the properties of well-known white nationalists Sam Dickson and Evan Anderson. Dickson has said that this dumping is a financial hardship, and it interferes with his plans of gentrifying the Lakewood area and forcing out people of color.  He and Anderson are very busy organizing with other white supremacists, including attending white pride rallies and providing violent white supremacists with material support. It has been too costly for them to hire security at each of these properties, and it is not possible for police to watch them at all times. So we are relying on your honor and goodwill to refrain from dumping garbage or doing other property damage to these locations, such as breaking windows and spray painting ‘Nazis get out’. If the dumping continues, Dickson and Anderson may even be forced to sell the properties at a loss. Here is a list of Sam Dickson’s and Evan Anderson’s properties to please not dump any trash on.

The fact that these creeps haven’t been beaten bloody and retarded in the streets is proof that white supremacists—if they exist at all—have no power in Atlanta. The city hasn’t had a white mayor in 45 years.

NEW YORK TIMES FLOGS ITSELF OVER “ANTI-SEMITIC” CARTOON
What’s the deal with Jews and cartoons, anyway? Why are people always drawing cartoons of them? Don’t they know the Jews will get upset? Or maybe that’s the purpose?

“This world isn’t going to get better anytime soon, is it?”

We’ll bet you didn’t realize that The New York Times was an anti-Semitic newspaper, a fact rendered even more horrific by the fact that Jews own it.

CNN.com recently ran an article that went on for several thousand unnecessary words about a cartoon featured in an offshore version of the Times that depicts a blind, yarmulke-wearing Donald Trump holding a leash behind Israeli Prime Minister Benjamin Netanyahu, who just so happens to be rendered as a dog.

OK, what the hell is that supposed to mean? Normally it would mean that Trump is controlling Netanyahu, right? After all, he’s the one who has him on a leash. Then again, why is Trump blind? Even so, why is he wearing one of those little Jewish hats? This cartoon doesn’t make us hate Jews so much as it makes us despise cartoonists whose messages are hopelessly vague.

Nevertheless, several Jews and the blind people that lead them around on leashes were so upset that they stood outside the Times building last Monday, waving Israeli flags and shouting “Shame on you!” in what we will presume were very caustic accents that tend to mimic the sound of barnacles being forcibly scraped off a rusty battleship.

Numerous spokesmen for countless Jewish groups said that the cartoon reminded them of vintage-era Nazi propaganda and they can’t wrap their heads around the fact that in this day and age, after two World Wars and all of the TV movies, people are so blindly hateful to suggest that Israel and Jewish people have any power or influence whatsoever over world events. High-ranking officials at the Times vowed to more thoroughly vet their editorial process so that it completely eliminates any suggestion that Jews are a highly successful group who use that success to their advantage.

António Moreira Antunes, the Portuguese cartoonist who created the vile anti-Semitic graphic monstrosity, simply shrugged happily as folds of fat giddily jiggled throughout his body. He said that Jews shouldn’t be “above criticism, adding that the hysteria was “made through the Jewish propaganda machine, which is, anytime there’s criticism it’s because there’s someone anti-Semitic on the other side, and that’s not the case.”

From here on out, no one has any excuse to be gay. Problem solved.

RECENT MUSLIM CONVERT ARRESTED IN ANTI-WHITE-NATIONALIST BOMB PLOT
All we seem to hear about these days are all these “white nationalists” and how they’re always bombing and killing people—and when they aren’t, they’re actively plotting to bomb and kill them. Why? Because they’re filled with irrational hatred and therefore must be euthanized like the rabid dogs they are.

Anyway, everyone knows that a “white nationalist” is basically anyone who isn’t a communist, and that that’s why even people who hold rallies touting the very vague and rather bland concept of “freedom” are accused of plotting to hold storm-trooping white nationalist hate-fests where everyone screams and stomps their little leather baby booties about how it’s cool to bomb and kill nonwhites.

Last week, FBI agents arrested a 26-year-old Afghan war vet named Mark Steven Domingo and charged him with plotting to detonate a series of nail bombs at the above-linked “freedom” rally, which, as God’s cruel humor wound up dictating, never even happened. Domingo, a recent convert to Islam, had allegedly left comments in online chatrooms calling for “retribution” after the anti-Muslim Christchurch shooting.

This world isn’t going to get better anytime soon, is it?

BORDER PATROL DOING ITS BEST TO HELP SPREAD TUBERCULOSIS THROUGHOUT THE NATION
Immigrants from our Southern border come here to bring hope and determination and soulfulness and color and vibrancy and nachos and tuberculosis.

We’re talking about the illegal ones, of course, but at this point we’ve sort of thrown up our hands and have assumed they’re all illegal.

Legally, an immigrant applying for US citizenship needs to be screened for having been inoculated against “vaccine-preventable diseases,” but because illegal immigrants are dirty stinking scofflaws who engage in wanton public defecation and the live ritual decapitation of chickens, we don’t expect them to follow the law, now, do we?

When a person with TB sneezes, thousands of potentially infectious particulates are spread into the air like so many dandelion petals fluttering in the spring breeze—or, to put a sharper point on it, like so many illegal aliens released into the American heartland while ICE looks the other way.

MAN SMASHES MULTIPLE WOMEN’S WEIGHTLIFTING RECORDS
Mary Gregory is some dude who claims he’s a chick. He looks so much like a dude, we never would have assumed he’s a chick until we were informed so. We would have been more likely to assume he’s a white-male offensive tackle for the Detroit Lions. But because we live in an upside-down world where dudes who claim they’re chicks are taken at their word, he was recently able to break four women’s world powerlifting records.

He then went onto Instagram to rub it in the noses of all those legitimately freakish legitimate females who for some reason would rather lift weights than suckle infants:

What a day, 9 for 9! Masters world squat record, open world bench record, masters world dl [deadlift] record, and masters world total record!…A huge thank you to [RAW Powerlifting Federation], from the bottom of my heart! As a transgender lifter I was unsure what to expect going into this meet and everyone — all the spotters, loaders, referees, staff, meet director, all made me welcome and treated me as just another female lifter — thank you!

“Just another female lifter.” WOW, what a jerk!

STUDY: WHITE MEN ARE THE ONLY GROUP WHO REALIZES THE WORLD IS MORE DANGEROUS FOR MEN THAN IT IS FOR WOMEN
The USA is a country where even black women outlive white men and where the law is prejudiced against men in everything from criminal sentencing to domestic disputes of every stripe, but because male homosexuals and butch lesbians control the entertainment industry that has been pushing this nonstop anti-penis rape-o-rama agitprop for years now, some people have been hoodwinked into believing that the world is far more dangerous for men that it is for women.

It’s not. But that’s what everyone except white men seems to feel.

According to a recent YouGov poll, the only people who embrace the truth of the matter are white men.

By gigantic margins, but of course, all races of women agreed that it’s far more dangerous to be a woman. White women led the pack.

The only thing this survey shows is that women have an inflated sense of how much danger they are in compared to men.