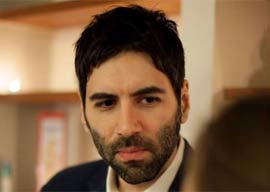 The Week’s Most Busted, Disgusted, and Maladjusted Headlines

PICKUP ARTIST SWALLOWS THE “GOD PILL”
Daryush Valizadeh—don’t ask us to pronounce it, because we don’t know, either—is an American-born writer of Persian and Armenian ancestry who is better known as “Roosh V.” Since early in this millennium, he has carved a niche for himself as the most high-profile blogger in the “manosphere,” which initially emerged as a reaction to radical feminism and its devastating effects on gender relations. Roosh has written several travelogues about how to use “game”—i.e., manipulating female psychology in order to “bang” them. His audience seems to consist almost exclusively of young males who are apparently clueless about how to seduce women and therefore hang around with other young males in order to accuse one another of being fags.

More recently Roosh has amped up the fag-bashing to the point where he claims that our degenerate society is forcing men to become fixated on the female posterior in order to make men gay. He also claimed that Listerine mouthwash has become gay.

If there’s anything gayer than seeing gayness in everything, we are unaware of it.

Now, like so many others in the dissident right, Roosh has repented and is pretending that he found God.

He claims that the recent death of his sister from cancer combined with his own experiences with “hedonism,” as well as an alleged “message” he received while on psychedelic mushrooms, has forced him to reject the “red pill” in favor of the “God pill.” He also claims he has started reading the work of E. Michael Jones, a race-denier who recently tweeted that if it were not for the Catholic Church, Europe would be as destitute as Africa.

Whereas Roosh used to posture as someone with an intimate knowledge of female psychology, he remains single and unmarried at forty and has apparently given up the whole “game” game and is blaming his lack of success with females on…drum roll, please…SATAN:

Modern women are influenced by Satanic influences that control how their sexuality is displayed. Therefore when you are immediately aroused by a woman’s body in public, and drop all rational to desire her intensely, you are being tempted by Satan. She is merely the conduit.

Last week he also announced that his online forum—which used to consist almost exclusively of discussions about fornication and premarital sexual activity—is now banning those discussions because they apparently vex God grievously:

Due to my recent return to faith, my sense of morality is becoming based on the Bible. I’ve stopped a lot of behaviors that I’ve used to do and am in the process of making other changes. I’ve also realized that the majority of my published materials and online platforms lead men into sin or enable them to partake in sin. I no longer want this to occur, so I am implementing two new rules on this forum that are effective on June 1, 2019….You can no longer discuss fornication or pre-marital sexual activity….

Good luck with the whole neo-Amish thing. We’re absolutely certain that the way to win the hearts and minds of our youth is to forbid them from having any fun.

FALSE RAPE ACCUSATION LED TO MAN’S STABBING DEATH
Brittany Sorey is a 30-year-old mother of six in Florida who was recently charged with filing a false police report and released on a $216 bond—all as punishment for making a false rape accusation that led to a man’s death.

In late March, Sorey’s husband was arrested after she accused him of menacing her with a Glock handgun and shoving her to the ground during a domestic dispute over “infidelity allegations.”

“If there’s anything gayer than seeing gayness in everything, we are unaware of it.”

Last month she told police in Largo, FL that an unidentified Hispanic man forcibly entered her apartment and “battered her and vaginally penetrated her with a broken broom handle and a box cutter.” She made the same claim when grilled by detectives.

Sorey and her brood later vacated the apartment but let a friend named Timothy Hignite stay there. According to court papers, on May 10 a neighbor, 60-year-old Michael Peterson, knocked on the apartment door demanding repayment of a loan he’d made to Ms. Sorey. Peterson was allegedly drunk and belligerent, and when Hignite called Sorey to tell her what was going on, she reportedly told him that the man who was screaming in the background sounded like the man she claimed had raped her in March.

When Hignite attempted to go outside, he was allegedly attacked by Peterson. He stabbed Peterson to death but is not being charged because police ruled it was in self-defense.

After Peterson’s stabbing death, Sorey reportedly told police that she had “fabricated the entire report of sexual battery and that it never happened.”

A warning to Ms. Sorey: Next time a man gets killed because you falsely accused him of rape, you will also be charged $216, so hold your tongue next time.

FROM WATER BOTTLES TO WATERMELONS, EVERYTHING IS RACIST
The Boston Museum of Fine Arts recently apologized for something about which they apparently didn’t need to apologize, but no one wants to make the black kids and their black teacher angry, now, do they?

According to middle-school teacher Marvelyne Lamy, when she attempted to take her black students to the museum, a staff member told her group:

No food, no drink, and no watermelon.

A museum spokesperson responded that the staff member actually had said:

No food, no drink, and no water bottles.

Museum officials apologized for basically enslaving and whipping the children again, dredging up centuries-old traumas. They also promised to torture their staff with sensitivity training. Hopefully they will also train their employees to meticulously enunciate the term “water bottles” in the future.

BLACK-ONLY GRADUATION CEREMONIES AT 75 AMERICAN COLLEGES
A recent study by the National Association of Scholars finds that American colleges are becoming more segregated than at any time since the Jim Crow Era. This only applies to blacks segregating themselves, because as we all know, there is nothing more supremely evil on Earth than when white people do it.

Surveying 173 colleges, the study found that 80 of them (46%) segregate orientation programs; 75 (43%) allow for black-only residential arrangements; and 125 (a robust 72%) allow for all-black graduation ceremonies. Slightly over two-thirds of colleges in the survey provide for “Diversity Fly-Ins,” in which nonwhite students receive an all-expenses-paid trip to visit the campus before deciding to enroll.

Although these race-based programs are ostensibly designed to protect nonwhite students from all the alleged “racism” constantly foisted upon them by the whites, we suspect they may actually be intended to make black students feel less ashamed about suffering a graduation rate that is 20% lower than for white and Asian students as well as SAT scores that are, on average, 177 points lower than those of white students.

GAY WHITE JOURNALIST WHO OPPOSED ‘WHITENESS’ KILLS HIS WHITE SELF
Pieter Bosch Botha, AKA Pieter Howes, was a gay white “journalist, actor and director” who made his bones on Twitter by taunting President Trump and bashing the very notion of “whiteness.” He stated that all white people—even the “good” ones—are racists.

In an article titled “On South Africa’s White Genocide Myth And How Right-Wing Afrikaners Are Dividing The Nation,” Howes wrote:

Early in May, Botha killed himself.

Repeat after us: If there is to be a white genocide taking place, we’d prefer it to be an auto-genocide by white people who hate their own skin.

STUDY: CONFIDENCE MORE IMPORTANT THAN CONFIDENCE
Writing in the Journal of Personality and Social Psychology, scientists from Stanford University and the U. of Virginia have concluded that when it comes to success, confidence is more important than ability.

The researchers pored over 150,000 applicants for small business loans in Mexico as well as 250 American college undergraduates performing mock job interviews and found that, according to the Times, “the most reliable predictor of success…was not ability, but overconfidence.”

This tends to contradict earlier studies that claim self-esteem and performance may actually be inversely correlated.

But if the new study is true, we finally have empirical evidence that Dunning-Kruger effect is a blessing rather than a disability.