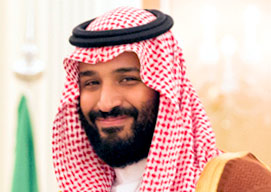 The Week’s Most Lyrical, Empirical, and Satirical Headlines

Saudi Crown Prince Mohammed bin Salman—who, it must be noted, wears a tablecloth on his head rather than a crown—recently announced that if you dare to say anything funny about him and his swarthy, oily, hairy henchmen, you will go to jail and you will NOT like it. Saudi Arabia’s public prosecutor’s office announced the following on Twitter last week:

Producing and distributing content that ridicules, mocks, provokes and disrupts public order, religious values and public morals through social media…will be considered a cybercrime punishable by a maximum of five years in prison and a fine of three million riyals ($800,000).

The Saudi royalty—who are rumored to inject themselves with the blood of slaughtered Christian infants for a cheap thrill—are hardly ever criticized in the American press because, along with certain other countries, they own the American press.

Whereas our media will pillory any white man in Nebraska who accidentally sneezes on a black child, it remains relatively silent about the fact that the Saudi regime actively antagonizes anyone who dares to criticize it.

In 2012, a Saudi blogger who’d committed the unpardonable sin of criticizing Saudi clerics was sentenced to ten years in prison and 1,000 lashes. In 2014, a Saudi activist who’d dared to criticize human rights abuses in his country in interview and on social media was squashed with a 15-year sentence. That same year, three Saudi lawyers were each handed eight-year sentences for using Twitter to criticize the country’s Ministry of Justice.

May the fleas of a thousand camels infest their armpits.

KAEPERNICKELS AND DIMES
Former NFL quarterback Colin Kaepernick—the rumored love child of an African man and a tapir—is one of the few mixed-race QBs to reach the Super Bowl. He lost, and then he continued to lose until no one would renew his contract.

“May the fleas of a thousand camels infest their armpits.”

A couple years ago, innumerate protestors were raising a countrywide stink about the fact that maybe as high as one percent of annual black murder victims are killed by white police, which is a nice way of deflecting from the fact that around 93% of black murder victims are killed by other blacks. Seizing the moment as a proud half-black man with a dying career, Kaepernick led other disgruntled NFL players—the sort of multimillionaire ingrates who suggest they are modern-day slaves and that “NFL” actually means “Negroes For Lease”—in taking a knee while the Star-Spangled Banner played at football games.

Kaepernick’s unsettling face recently appeared in a campaign for the billion-dollar sportswear titan Nike that suggests he was fired for his beliefs rather than being a poor player and a pain in the ass. The poster read:

Believe in something.
Even if it means sacrificing everything.

Of course, sooner or later, someone across this great land was bound to use the “N” word in response, and the rape hoaxers at Rolling Stone would see fit to write an entire article about how the poster proves that racism is still a toxic cancer on the body politic.

In stark defiance to the continual rubbing of the American public’s noses in imagined historical sins, the extra-tiny College of the Ozarks announced it would remove the Nike logo from its uniforms. During a volleyball match on Friday, the school’s female volleyball team—who, it must be said, appear to be a group of extremely healthy and fertile young Christian women—opted to wear grey sweatshirts rather than the blasphemous, vile, sinister, anti-American Nike logo.

God bless hillbilly volleyball girls. May they all start shooting out babies like so many white volleyballs.

TRUMP SEEKS TO SUPERCHARGE LIBEL LAWS
Journalist Bob Woodward, the goy who along with Carl Bernstein broke the Watergate scandal that led to Richard Nixon’s downfall, recently released a book called Fear: Trump in the White House that, without reading a word beyond the first word in the title, we are certain is another estrogen-fueled jeremiad that portrays Trump as an evil, despicable, subhuman, galaxy-destroying Jerkasaurus Rex.

The book allegedly quotes Trump as saying that Attorney General Jeff Sessions is “mentally retarded” and “a dumb Southerner.” Trump took to Twitter to tweet his Trumpy distaste:

The already discredited Woodward book, so many lies and phony sources, has me calling Jeff Sessions ‘mentally retarded’ and ‘a dumb southerner.’ I said NEITHER, never used those terms on anyone, including Jeff, and being a southerner is a GREAT thing. He made this up to divide!

As he did earlier this year after the release of the racially indeterminate boiled egg Michael Wolff’s book Fire and Fury: Inside the Trump White House, Herr Trump suggested that he would sic his lawyers into finding a way to strengthen America’s libel laws.

SKIN CREAMS IN ASIA: PAINT IT, WHITE
In the Western world, ruled as it is by white people, even daring to suggest that it’s OK to be white can get you machine-gunned in the streets.

In Asia, however, being white is cool, especially if you’re not white.

A recent study found that over half of all Indian adults had used skin whiteners. According to World Health Organization stats, a robust 40% of people in Malaysia, China, the Philippines, and South Korea use skin lighteners. Shuting Hu, a Chinese specialist in skin whiteners, explains the phenomenon of yellows straining to become whites:

The solution is clear: All white people need to leave the West; it’s clearly too hostile toward white people. Go East, white man.

FILIPINO PRESIDENT SUGGESTS THAT BEAUTIFUL WOMEN CAUSE RAPE
Filipino strongman Rodrigo Duterte has long garnered our admiration for being one of the world’s funniest politicians. A while back while commenting on a high-profle gang rape in his country, he said that the victim was so beautiful, he lamented that he didn’t get the first crack at her. He also once accused his daughter of being a “drama queen” when she publicly revealed she’d been sexually assaulted.

Last week in Israel, he continued with the rape jokes. Commenting on statistics that showed Davao City reporting some of the nation’s highest rates of sexual assault, Duterte suggested it’s because there are so many hot Filipinas there:

They would say again I am a misogynist….There are many rape cases in Davao. I said ‘perhaps there are many beautiful women in in Davao.’ I did not say all of them were raped….But you are almost mesmerized or tempted.

Anti-rape activists, who are notoriously ugly, fingered Duterte for promoting the trope that rapists discriminate based on looks, because as everyone knows, even 300-pound women with nose rings and harelips are so alluring that most piggish men can’t keep their mitts off them.

Publicly revealing that you were raped cannot possibly be a very sneaky way of announcing to the world that you’re irresistible, so don’t even go there.

ASIA ARGENTO FLIPS THE SCRIPT
Soul-sucking part-time actress Asia Argento was recently featured in these pages flip-flopping in her story of exactly what happened between her and 17-year-old Jimmy Bennett in a Marina del Rey motel room back in 2013.

At first she denied that anything sexual had ever happened between the two. Then, when text messages leaked that showed her quite clearly saying, “I had sex with him, Argento, who had known Bennett since he was seven, said that she didn’t know he was a minor until receiving a “shakedown letter” that her dead boyfriend, Anthony Bourdain—who appears to have killed himself after being distraught at seeing Ms. Asia cavorting with a man less than half his age—paid off to the tune of $380,000 just to keep things quiet while she was parading as an anti-rape activist.

Last week Argento’s lawyer Mark Jay Heller—who appears to have been sculpted entirely from chopped liver—is flipping the script and claiming that Bennett was the sexual predator in the equation:

Asia at no time initiated a sexual encounter with Bennett and in fact as she stated in her response to the New York Times article, concerning their past history, ‘I have never had any sexual relationship with Bennett…but rather the relationship was a long distance friendship over many years.’…

Asia chose at the time not to prosecute Bennett for sexually attacking her.

It appears that Heller is trying to say that Argento paid Bennett $380,000 as hush money so he wouldn’t tell the world that he raped her.

It’s time for us to go curl in a ball on the shower floor and cry all the pain away.