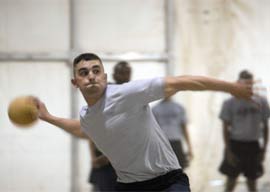 The Week’s Most Retarded, Discarded, and Disregarded Headlines

OPPRESSION THROUGH DODGEBALL, REDEMPTION THROUGH YOGA
It’s highly likely that you are entirely unaware that team sports such as dodgeball and physical disciplines such as yoga are highly political activities whereby one can either reinforce structures of oppression or liberate oneself from oppression’s poisonous shackles. At the risk of sounding mildly hostile, the reason you are unaware of this is because you are obviously part of the problem and need to actively and publicly repent for the rest of your life.

A group of Canadian professors who call themselves “researchers” but appear to be nothing more than propagandists recently informed the Congress of Humanities and Social Sciences that dodgeball reinforces “oppression” and instructs students to “dehumanize” and “other” their peers.

Dr. Joy Butler is a professor at the University of British Columbia who specializes in “pedagogy” and sort of looks like the bastard love child of Martina Navratilova and an HIV-positive pelican. Spewing pseudo-academic malarkey, Joy joylessly informs us that dodgeball carries no enjoyment:

When you’re setting up the environment for students to learn, and you introduce the idea that it’s okay to slam the ball at whomever you like, even if it’s with a soft ball, the intention is there….The message is that it’s okay to hurt or dehumanize the ‘other.’ The competition is about annihilating one’s opponent, and the true definition of competition is between two evenly matched teams. Well, kids stack their teams, and they really enjoy beating the other team. What’s the enjoyment of that?

One might be forgiven for thinking there would be far more enjoyment in hurling a dodgeball at Joy Butler’s face than there would ever be in looking at her face.

Speaking of unpleasant faces, Laura Humpf is an aggressively uncomely Seattle yoga teacher in her late 30s who appears to wish that Lord Vishnu would grant her the ability to crawl out of her white skin. She made headlines in 2015 by announcing that she would be hosting a yoga class exclusively for people of color—except, of course, for the color-deprived instructor.

This time around, Humpf, who says she spends much of her waking hours “interrogating” her own whiteness, is hosting a yoga class called “Undoing Whiteness” that aims to make the Emerald City’s perpetually uptight whites even more uncomfortable and guilt-addled than they already are. It’s almost as if she wants white people to be paralyzed by their own whiteness:

Are you a white person wanting to unpack the harmful ways white supremacy is embedded in your body, mind and heart?
Are you looking for an embodied approach to racial and social justice? Are you craving a spiritual community where oppression and privilege can be addressed with compassion and honesty?

The only correct answer to all three questions is “no.”

NEW MUSIC VIDEO SHOWS WHITE KIDS IN CAGES AND DRINKING TOILET WATER
Vic Mensa is a mulatto musical performer from Chicago who almost certainly would not qualify as a member of MENSA.

We’ll be living it up, not giving a fuck
Splitting you up, then we put you in cuffs
Then we shipping you off
Yeah, you could get lost at Camp America.

My intention for using white kids as opposed to minority children is to point out the blatantly obvious fact that this would never happen to white kids in this country or maybe anywhere on this earth.

He sidesteps the “blatantly obvious fact” that nowhere on earth are white parents feloniously endangering their children by dragging them into nonwhite countries and insisting it has something to do with the phantom demon that morons refer to as “justice.”

WILL EBOLA COME TO THE ALAMO?
The Democratic Republic of the Congo is currently in the throes of the second-worst Ebola outbreak in world history, with over 2,000 cases reported. The nation’s nominal per-capital GDP is an appallingly low $501 per annum, and its mean IQ is a pathetic 78, so of course we need more Congolese people in these here United States.

The city of San Antonio, TX is perhaps best known for the Battle of the Alamo, which marked one of the only instances in world history where Mexicans got the better of Europeans. It is now a Ground Zero dumping ground for hundreds of Congolese illegal aliens who started arriving last Tuesday and are marked for redistribution throughout the United States despite the fact that their very entry into the country is a violation of US law.

Ebola is highly contagious and deadly in 90% of cases. Vomiting blood is one of its many horrific symptoms, but we can all agree that it’s better than being called a xenophobe.

USA’S SUICIDE AND OVERDOSE DEATHS ARE HIGHER THAN EVER
A report issued last Wednesday by something called the Commonwealth Fund claims that suicide rates and overdose deaths have reached an all-time high in the United States. It examined 47 different factors that contribute to health outcomes, among them insurance coverage, smoking, obesity, suicide, and tooth loss.

It found that the perpetually benighted state of West Virginia suffers from the nation’s highest rate of drug overdose deaths, rising a staggering 450% between 2006 and 2017. Compared to the rest of the country, opioid overdoses were highest in a geographical cluster running from West Virginia to Ohio, Kentucky, Pennsylvania, the District of Columbia, and the perpetually unnecessary state of Delaware.

In contrast, deaths from suicide and alcohol were more common in Western states such as Montana, Oregon, and Wyoming, along with super-bleak Plains states such as Nebraska and the Dakotas.

LESBIAN COUPLE CASTRATES, MURDERS, AND DISMEMBERS THEIR NINE-YEAR-OLD SON
Rosana Candido and Kacyla Pessoa are a pair of Brazilian sapphites who are built like linebackers and make stegosauruses look attractive by comparison. They have reportedly confessed to a crime that is the ghastliest we’ve heard so far this year.

A year or so ago, Candido and Pessoa allegedly used “rudimentary tools” to rip off the penis of Candido’s nine-year-old son Rhuan, claiming he “wanted to become a girl.” According to a local newspaper report:

After removing his penis, the women said they sewed an improvised version of the female organ onto the mutilated area.

Sources claim that the dykey duo routinely tortured and raped Rhuan. On May 31, they stabbed him to death while he slept, ripped his skin off his face, decapitated him, gouged out his eyeballs, chopped him into pieces, and attempted to immolate him on a barbecue grill. When the immolation failed, they stuffed his body parts into a suitcase and dumped it in a sewer. Candido allegedly told police that she murdered her son because he reminded her of his father.

Misogyny is a disease that you catch from women such as this.

13 WHITE SAN FRANCISCO COPS SUE CITY FOR RACIAL DISCRIMINATION
Last Tuesday, a group of 13 white San Francisco police officers—twelve of them male and one a lesbian—filed a discrimination suit in federal court, claiming that an outdated 1979 consent decree caused them to be passed over for promotions in favor of nonwhite officers who scored lower than they did on examinations.

The original consent decree was an affirmative-action scam first implemented in 1979 as the result of a 1973 lawsuit filed by black officers. Although the decree was officially discontinued in 1998, the new lawsuit claims that the decree represented “an obscure and biased promotional process” and that “it is no longer a proper rationale for race-conscious promotions.”

We have a dream that police officers will live in a nation where they are not promoted by the color of their skin, but by their test scores.

BAKERY WINS $11-MILLION DEFAMATION LAWSUIT AGAINST OBERLIN COLLEGE
Oberlin College has gained a reputation as one of the nation’s most insanely progressive institutions of higher learning, and it appears that its totalitarian bloodlust and insatiable drive to torture ideological opponents may finally prove to be its undoing.

In November 2016, three black Oberlin students were arrested after one of them used a fake ID and shoplifted from Gibson’s Bakery in nearby Elyria, OH. The owner’s son, a white man named Allyn Gibson, followed the students out of the bakery and engaged in a physical altercation with them. As part of a subsequent plea deal, the black students pled guilty and signed statements declaring that the altercation was not racially motivated.

Naturally, none of this stopped Oberlin’s students, nor some of its faculty, from insisting that the event was racially motivated. Egged on by an unforgivably ugly white female teacher named Meredith Raimondo, the bakery became the site of ceaseless public conniptions about white supremacist croissants or some such hysterical nonsense. Raimondo reportedly belched loudly from a megaphone during the “protests” and distributed flyers calling the bakery “racist.” The public conniptions became so unruly that Oberlin’s police chief reportedly said he considered calling in the county’s riot squad to quell the unrest.

The bakery’s owners filed a defamation lawsuit, and last week a jury ruled in their favor to the tune of $11 million—which will potentially be tripled after a hearing on Tuesday regarding punitive damages. The jury found Oberlin and Ms. Raimondo guilty of defamation and intentional infliction of emotional distress.

It is our fondest desire that this case sets a precedent and becomes part of a never-ending trend. These disgruntled and maladjusted freaks need to crawl back into their holes.