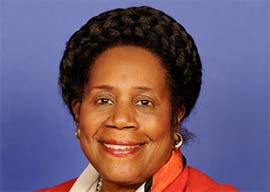 OH, PLEASE, NOT THIS “REPARATIONS” NONSENSE AGAIN!
Since the word “reparations” is derived from the word “repair”—which basically means “to return to the state of affairs prior to the alleged damage”— a truly sensible reparations plan would either involve one-way tickets back to western Africa or a severe downgrade of black Americans’ income and life expectancy, seeing as how they weren’t living very long or making very much money in their rich and fulsome homeland.

Last Wednesday, a nearly all-black panel—the lone exception was white filmmaker Katrina Browne, who is apparently guilt-ridden that her ancestors traded slaves, but not so guilt-ridden that she seems willing to give all of her wealth away, because clearly this is someone else’s fault—attended a Judiciary Committee hearing in D.C. to discuss Resolution 40, a pro-reparations bill that would allocate $12 million to study exactly how to bleed more money from white taxpayers in order to prevent black people from rioting again.

Resolution 40 is named in honor of the failed post-Civil War promise to provide freed slaves with “40 acres and a mule.” A little-known fact is that the mule in question was black academic Cornel West.

Since there are apparently no white Republicans who are brave enough to “go there” and say they oppose reparations, two token Negroes took up the fight before being given cookies and warm milk by their masters.

Senator Cory Booker, a black Democratic presidential candidate who is rumored to engage in carnal relations with men, proposed issuing “baby bonds” whereby $1,000 would be placed in a special account for every baby born in America, with additional deposits until they reach 18. Naturally, poor black children would receive larger deposits.

Texas Congresswoman Sheila Jackson-Lee—who infamously claimed that the US Constitution is 400 years old, that Neil Armstrong planted a flag on Mars, and complained that hurricane names are too “lily-white”—added her two cents worth of brain cells by commenting that “the percentage of black children living in poverty is more than 150%.”

Despite her egregious dunderheadedness and savage ingratitude, Ms. Jackson-Lee has an estimated net worth of anywhere from $1 million to $3.5 million. If there were ever a persuasive argument against reparations, it is that Sheila Jackson-Lee is a millionaire.

Then again, if we don’t hurry up and pay them whatever they demand, they may keep raping women and blaming it on slavery. A black parolee was arrested last week and is charged with a brutal rooftop rape in the Bronx of a 20-year-old white woman that he left with a broken nose, broken teeth, and vomiting blood.

According to a witness, 23-year-old rape suspect Temar Bishop justified the rape thusly:

Did anyone ever consider that maybe the Emancipation Proclamation wouldn’t end well?

CALIFORNIA GOVERNOR PREDICTS G.O.P. IS HEADED TO THE “WASTE BIN OF HISTORY”
Although California Governor Gavin Newsom isn’t officially gay, he sure looks and acts that way.

“If there were ever a persuasive argument against reparations, it is that Sheila Jackson-Lee is a millionaire.”

Newsom, like so many others who simultaneously deny that white genocide is occurring while cheering it along with all his might, recently gloated that the utter collapse of the GOP in California over the past few decades.will be writ large across the nation in the coming years. Acting really gay, he said:

America in 2019 is California in the 1990s. The xenophobia, the nativism, the fear of ‘the other.’ Scapegoating. Talking down or past people. The hysteria. And so, we’re not going to put up with that. We are going to push back….What we’re doing is working … I think Democrats are winning right now….[the GOP is headed] into the waste bin of history.

We wonder if Newsom would have said the same thing to the Cherokee in the early 1800s. Probably not, unless he was a Cherokee.

Newsom is wrong that it has anything to do with irrational phobias, though—it’s the demographics, baby. In 1970, California was nearly 80% white. Now it’s hovering at around a third of the total state population and teetering badly.

TRUMP ACCUSES NEW YORK TIMES OF TREASON, THREATENS REPORTER, ALMOST BOMBS IRAN
For our ultra-Zionist president, it was a chaotic week even by his own standards. After The New York Times printed an article quoting government sources who allege that the US is launching cyberattacks on Russia’s power grid, he said the paper had committed “virtual treason”:

Do you believe that the Failing New York Times just did a story stating that the United States is substantially increasing Cyber Attacks on Russia. This is a virtual act of Treason by a once great paper so desperate for a story, any story, even if bad for our Country…Anything goes with our Corrupt News Media today…They will do, or say, whatever it takes, with not even the slightest thought of consequence! These are true cowards and without doubt, THE ENEMY OF THE PEOPLE!

Using The Wall Street Journal as his sounding board, New York Times publisher A.G. Sulzburger called Trump’s comments “irresponsible and wrong,” alleging that he had crossed that “line” we keep hearing about.

Writing for The Daily Beast in a vituperatively unhinged and foul-mouthed manner, elephant-eared serial dweeb Rick Wilson accused every member of Trump’s team of treason. That’ll show them!

Also last week, Trump allegedly threatened a reporter with prison time for attempting to snap a photograph of a letter that North Korean tinpot dictator and international sex symbol Kim Jong Un had sent him.

Late last week, Trump canceled an airstrike against Iran at the last minute, forestalling the ultimate destruction of the USA for a least a little while.

DEFACING CONFEDERATE STATUES, CONT.
In their ongoing quest to destroy every last remnant of white people acting whitely, disgruntled and presumably smelly activists have been vandalizing Confederate statues throughout the American South.

The year is not yet half-over, yet over a dozen Confederate statues have been vandalized so far. These incidents include:

• Last Monday, “THEY WERE RACISTS” was smeared in red paint on a Confederate monument in Nashville.

• A “red paint-like substance” was splattered on the Confederate Defenders of Charleston Monument in South Carolina.

• The words “murderer” and “coward” were spray-painted in pink on a monument outside North Carolina’s Rutherford County Courthouse.

• Paint was thrown in May on the statue of a Confederate soldier in Louisville, KY—the fifth time in two years the monument has been defaced.

Although the South was burned to the ground and beaten into submission over 150 years ago, it will apparently never be forgiven.

QUOTE MISATTRIBUTED TO HITLER USED IN GRADE 8 GRADUATION DISPLAY
Graduation is supposed to be a time of happiness, of wistful remembrance, of shared aspirations and bright futures. The LAST person you want at your graduation is Adolf Hitler.

Sadly—no, make that tragically—Hitler refuses to die, as is evidenced by his appearance on a quote in a Grade 8 graduation picture display at Holy Rosary Catholic School in Toronto.

A group of basketball players saw the quote, were triggered, and reported it. The quote read:

Don’t cry because it’s over, smile because it happened. (Adolf Hitler)

The student who posted the quote was unaware that the quote did not originate from Hitler. Its true source remains unknown, but it has more feasibly been attributed in the past to Dr. Seuss.

The Toronto Catholic District School Board apologized profusely, but for a certain Avi Benlolo, president and CEO of Friends of Simon Wiesenthal Center for Holocaust Studies, it wasn’t enough. He said it shows that people still need even more education in the Holocaust.

Boy, when they said “never forget,” they weren’t kiddin’!