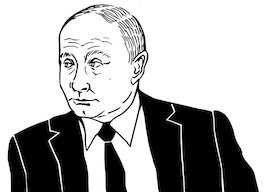 The Week’s Most Foolish, Ghoulish, and Mulish Headlines

PUTIN SAYS LIBERALISM IS OBSOLETE
There is absolutely no debate that Vladimir Putin is one of the world’s sexiest men, with not only a net worth that dwarfs that of Donald Trump but also the raw physical fighting acumen that would permit him to tear Trump to pieces should the two world leaders ever decide to go mano a mano.

Proof that he may be the coolest guy on Earth is the fact that when topless female protesters attempt to shock him, he merely flashes a look that says, “Whoa—nice cans, babe!”

In an interview with Financial Times in the Kremlin shortly before the G20 summit, Putin revealed yet again why 100 million replicas of him should be cloned and shipped promptly to the USA:

[Liberals] cannot simply dictate anything to anyone just like they have been attempting to do over the recent decades….This liberal idea presupposes that nothing needs to be done. That migrants can kill, plunder and rape with impunity because their rights as migrants have to be protected. Every crime must have its punishment. The liberal idea has become obsolete. It has come into conflict with the interests of the overwhelming majority of the population….I am not trying to insult anyone because we have been condemned for our alleged homophobia. But we have no problem with LGBT persons. God forbid, let them live as they wish. But some things do appear excessive to us. They claim now that children can play five or six gender roles. Let everyone be happy, we have no problem with that. But this must not be allowed to overshadow the culture, traditions and traditional family values of millions of people making up the core population.

AUTHOR: FEWER THAN ONE IN THREE “HATE CRIME” ACCUSATIONS IS GENUINE
Wilfred Reilly is a black professor of political science who has published a book called Hate Crime Hoax which purportedly details around 400 hate-crime allegations between 2010 and 2017 that were confirmed to be false.

According to his research, he has concluded that fewer than one in every three such accusations is legitimate.

Regarding the eternally unspooling Jussie Smollett debacle, Reilly refers to it as

…the archetype of a hate crime hoax. It’s one of the most flamboyant examples of the genre. It was a situation so extreme and bizarre that I think we would have had to look at how much racial progress the U.S. had actually made had it really occurred…but will we see the same amount of coverage when the hoax involves a less famous person?…In the mainstream media we hear almost constant talk about scary new forms of racism: “white privilege,” “cultural appropriation,” and “subtle bigotry”…[yet] a huge percentage of the horrific hate crimes cited as evidence of contemporary bigotry are fakes.

Mr. Reilly, thanks for being black and brave at the same time. It’s not like you could help being black, but thanks, anyway.

ANTIDEPRESSANTS INCREASE SUICIDE RISK 2.5X MORE THAN PLACEBO DOES
Although he is generally considered insane for his unkempt appearance, reclusive lifestyle, and the fact that he blew up a few people, Ted “The Unabomber” Kaczysnki remains the sanest voice of all regarding why the mass dosing of the public with antidepressants is insane:

Imagine a society that subjects people to conditions that make them terribly unhappy then gives them the drugs to take away their unhappiness. Science fiction It is already happening to some extent in our own society. Instead of removing the conditions that make people depressed modern society gives them antidepressant drugs. In effect antidepressants are a means of modifying an individual’s internal state in such a way as to enable him to tolerate social conditions that he would otherwise find intolerable.

A new study of nearly 32,000 people conducted by Dr. Michael Hengartner of Zurich University in Switzerland examined the use of antidepressants in England—where Prozac use was so rampant that in 2004 traces of the SSRI drug were found in the nation’s drinking water—revealed that compared to a control group of depressed patients who were administered a placebo, patients taking a variety of antidepressants were 2.5 times more likely to commit suicide.

Our study signals a rare but serious risk that needs to be brought to the attention of practitioners, particularly when starting or stopping antidepressants….It is known that antidepressants increase the risk of suicide among young people and adolescents, and for this reason their use is restricted among these patient groups….We can be confident that these drugs are producing an excess rate of suicides, beyond the depression itself. There is no doubt that this must be a response to the pharmacological effect of the drugs themselves. I’m not saying no one should be given antidepressants, but doctors should be much more conservative about how they use them. One in six adults being given antidepressants like in the UK—that is alarming.

Antidepressants are poison, and “depression” is a mood rather than a medical condition. If you’re depressed, the cure is to either adapt to or fix the situation that is making you sad.

DALAI LAMA: SEND MIGRANTS BACK, OR EUROPE BECOMES “MUSLIM OR AFRICAN”
Although to our knowledge, the Dalai Lama has never said, “Grab ‘em by the pussy,” he did utter the unforgivably sexist comment in 2015 that if there were ever a female Dalai Lama, she would need to be sexually attractive.

But his recent comments about immigration and Europe’s right to be European go much further than anything we’ve ever heard Donald Trump say.

In an interview with the BBC regarding Europe’s entirely manufactured refugee crisis, he opined:

European countries should take these refugees and give them education and training, and the aim is—return to their own land with certain skills.…A limited number is OK. But the whole of Europe [will] eventually become Muslim country—impossible. Or African country, also impossible….For example, we Tibetans took shelter in India, but most Tibetans want to return to Tibet when the situation there has changed. Each country has its own culture, language, way of life, and it is better for people to live in their own country. That is my view….They themselves, I think [are] better in their own land. Better [to] keep Europe for Europeans.

As long as the Dalai Lama stays the HELL out of Europe, he’s A-OK with us.

WOMAN SAYS HER PERFECT “FEMINIST” HUSBAND IS BORING, WISHES HE WOULD CHEAT
On a scale of 1 to 10, Clare O’Reilly is, to be quite generous, a 5, but she was fortunate enough to marry a 4 who is also a dutiful male feminist. Clare now finds herself so bored by her “good guy,” she is publicly wishing that he would cheat on her.

Writing for The Sun in England, O’Reilly whinges:

Simply put, I’m bored of being married to a paragon of virtue….

Don’t get me wrong, I love him and this year we celebrated 17 years together — 13 of them married — but I wish he’d lie, cheat, defame or slander just once, so that I could feel better about my own less-than-perfect character….

But it is not just his general decency that’s hard to stomach….He is selfless to the same degree I’m selfish, which according to the research, can sometimes work. The worst part is that I’m constantly around a level of virtue that is completely unattainable in my own life.

By doing absolutely nothing other than being himself, Jon constantly makes me look at where I’m falling short and what I’m doing wrong without so much of an utterance. It is infuriating.

None of this should come as a surprise to anyone who understands rudimentary female psychology. A 2018 study found that women prefer sexist males, “especially in mating contexts,” and a 2012 study revealed that men who help around the house get laid less often than their sexist pig counterparts. The cold, hard truth is that Mother Nature loves bad boys.

FEWER THAN HALF OF CHILDREN UNDER 15 IN USA ARE WHITE
In case you haven’t noticed, we’ve been noticing it on your behalf daily: We currently groan under the lash of a media/financial/educational complex which on one hand says that “white genocide” is merely a paranoid myth while on the other hand celebrating white demographic decline as if it was the best thing since Mike and Carol Brady got married and ensured that their six children (and their presumably lesbian maid Alice) would not live a life of penury, opiate addiction, and bus-station prostitution with all of its attendant diseases and skin disorders.

Juggling data from the U.S. Census Bureau, it has become apparent that 2018 marked the first time in the history of this sad, dying republic that the majority of children under 15 are not honkies.

In 2017, blacks, Hispanics, Asians, mulattos, and “misc.” accounted for 49.8% of America’s under-15 population. There was a slight chance that year that if members of the Van Patten theatrical family began prodigiously breeding again, we may have staved off minority status for at least another generation. But no—in 2018, the nonwhite quotient of under-15 Americans reached 50.1%, and we might as well all pack our bags and take the next bus to the reservations they are undoubtedly preparing for us.

AMERICANS VASTLY OVERESTIMATE THE QUOTIENT OF FUDGE-PACKERS AND CLAM-DIGGERS IN POPULATION
In the past, polls of Europeans have revealed that due to their exposure to American media, they believe the USA is roughly 50% black, when the truth is that the nappy-headed, blue-gummed, banjo-pluckin’ coon-doggies comprise a mere 13% of the population.

Now a recent poll of Americans shows that they overestimate the percentage of this nation’s gay population by a factor greater than five: Whereas most polls show that sodomites and sodomettes comprise about 4.5% of our country’s total, Americans believe they account for 23.6% of us, which is far gayer than we are willing to swallow.

Women estimated that 29.7% of Americans are gay, whereas men pegged it at only 17.4%, most likely because men are terrified of being called fags and want it made clear that they are in NO WAY homosexuals and wish that nobody else was, either, because it would make it far less tempting. Similar disparities were noted among those over 65 (who estimated that 17.5% of Americans are gay) and those from ages 18-29, who peg American life to be as fruity as Carmen Miranda’s headdress at a robustly faggy 28.5%.

In news that will stoke the embers of the flamers’ persecution complexes, a study from GLAAD shows that in the past year alone, the percentage of Americans aged 18-34 who said they were “very” or “somewhat” comfortable with rump-wranglers and carpet-munchers plummeted from 53% to 45%.

This shouldn’t come as bad news, though, because it has always been our suspicion that a primary thrill of being gay was the possibility of being fag-bashed at any moment.

DEPARTMENT OF EDUCATION: ASIANS OUTPERFORM WHITES DUE TO “WHITE PRIVILEGE”
A panel composed of members of some unnecessary thing called the Center for Racial Justice Education, which bleeds tax money out of your hard-working and underappreciated arteries via the Department of Education, is claiming, against all that is decent, good, and logical, that the reason Asian students consistently outperform white students on SAT tests and Asian adults average over $13,000 more than white adults in per-capita income is because Asian students “benefit from white supremacy…[and] proximity to white privilege.”

Got that? If someone performs in a superior manner to whites, it is only due to the evil demon virus known as white supremacy. Clearly, the only sane and humane thing to do is eliminate white supremacy, and whites will finally be superior again.