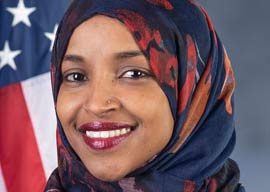 The Week’s Most Candid, Underhanded, and Reprimanded Headlines

TRUMP GOES FULL PIRANHA AGAINST COLORED CONGRESSWOMEN
Despite the fact that he’s raised the debt and failed to build a wall and has proved to be Israel’s bitch, Donald Trump will occasionally do something that reminds us of why we fell deeply in love with him.

Being the manipulative and possibly sinister wizard of human psychology that he is, Trump recently seized upon the civil-war interracial catfight brewing in the Democratic Party between hysterical white women such as Nancy Pelosi and even more hysterical colored women such as Alexandria Ocasio-Cortez to drive a wedge between them the size of Oprah Winfrey’s ass.

So interesting to see “Progressive” Democrat Congresswomen, who originally came from countries whose governments are a complete and total catastrophe, the worst, most corrupt and inept anywhere in the world (if they even have a functioning government at all), now loudly……and viciously telling the people of the United States, the greatest and most powerful Nation on earth, how our government is to be run. Why don’t they go back and help fix the totally broken and crime infested places from which they came. Then come back and show us how….it is done. These places need your help badly, you can’t leave fast enough. I’m sure that Nancy Pelosi would be very happy to quickly work out free travel arrangements!

Although he named no one, it was assumed he was referring to the dusky quartet of freshmen congressladies known as “The Squad”: the ragheaded Rep. Ilhan Omar (D-Minn.), Rep. Rashida Tlaib (D-Mich.),  Rep. Ayanna Pressley (D-Mass.), and the aforementioned mule-toothed Cortez, all of whom Pelosi had recently reprimanded for spending too much time on Twitter and not enough time orally servicing Pelosi.

Of these four, the only one born out of the country was Omar, an accused bigamist and practitioner of incest.

Omar, who may or may not have had her clitoris removed, fired back by calling Trump a hateful bigot who foments bigoted hatefulness:

As Members of Congress, the only country we swear an oath to is the United States.

Which is why we are fighting to protect it from the worst, most corrupt and inept president we have ever seen.

You are stoking white nationalism bc you are angry that people like us are serving in Congress and fighting against your hate-filled agenda.

On Monday Trump refused to give an inch and referred to The Squad as communists:

We all know that AOC and this crowd are a bunch of Communists, they hate Israel, they hate our own Country, they’re calling the guards along our Border (the Border Patrol Agents) Concentration Camp Guards, they accuse people who support Israel as doing it for the Benjamin’s

Wait a minute—they hate Israel? We may have to rethink this whole thing.

ANTIFA RADICAL SHOT DEAD AFTER FIREBOMBING ICE FACILITY
In a story that is gaining zero traction with the mainstream press for obvious reasons, a 69-year-old self-identified member of Antifa named Willem Van Spronsen was shot dead by police after tossing Molotov cocktails at an ICE detention facility in the dingy and depressing town of Tacoma, WA, AKA “Seattle’s Toilet.” According to police, he caused a vehicle to catch fire and also tried to set a propane tank and multiple buildings ablaze. In addition to the incendiary devices, he was armed with an AR-15 rifle.

“Wait a minute—they hate Israel? We may have to rethink this whole thing.”

In 2018, Van Spronsen pleaded guilty to a gross misdemeanor for obstructing a police officer during some half-assed protest that missed the point about everything, as half-assed protests by the mentally unstable are wont to do.

According to a friend of Van Spronsen’s named Deb Bartley, the dearly departed lunatic was an anarchist and antifascist and probably intended to leave this vale of tears via suicide by cop:

He was ready to end it. I think this was a suicide. But then he was able to kind of do it in a way that spoke to his political beliefs…I know he went down there knowing he was going to die.

He also bequeathed upon the world a manifesto:

I am antifa. I stand with comrades around the world who act from the love of life in every permutation. Comrades who understand that freedom means real freedom for all and a life worth living.

All power to the people!

We won’t miss him.

AMERICA’S FIRST BLACK BILLIONAIRE: DEMOCRATS HAVE “MOVED TOO FAR TO THE LEFT”
You may not have heard of Bob Johnson—or since the name is so generically bland, you may have heard of a billion Bob Johnsons and can’t tell them apart—but the one we’re talking about founded the cable network BET and as a result became the nation’s first black billionaire.

Although a vocal supporter of Hillary Clinton during the 2016 election, Johnson recently went full Uncle Tom. He not only criticized the Democratic Party, he said nice things about Donald Trump. In an interview with CNBC, Johnson opined:

The [Democratic] party in my opinion, for me personally, has moved too far to the left…And for that reason, I don’t have a particular candidate (I’m supporting) in the party at this time….I think at the end of the day, if a Democrat is going to beat Trump, then that person, he or she, will have to move to the center and you can’t wait too long to do that….I think the economy is doing great, and it’s reaching populations that heretofore had very bad problems in terms of jobs and employments and the opportunities that come with employment … so African-American unemployment is at its lowest level….I give the president a lot of credit for moving the economy in a positive direction that’s benefiting a large amount of Americans.

Congratulations for stepping off the plantation, Bob. Now fetch us some cornbread and lemonade.

COLOMBIAN BISHOP PLANS TO EXORCISE CRIME-PLAGUED CITY BY SPRINKLING HOLY WATER FROM A HELICOPTER
Monsignor Rubén Darío Jaramillo Montoya is the bishop of the Colombian port city of Buenaventura, and if we may be so blunt, his name is really a mouthful.

The city was named Colombia’s most violent—which, again, is saying a mouthful—and according to Human Rights Watch, its

…neighbourhoods are dominated by powerful criminal groups that commit widespread abuses, including abducting and dismembering people, sometimes while still alive, then dumping them in the sea. The groups maintain ‘chop-up houses’ (casas de pique) where they slaughter victims, according to witnesses, residents, the local Catholic church and some officials.

To combat such evils, Monsignor Montoya plans to ride in a helicopter and do what any sane person would do: He’s going to sprinkle holy water over the city and drive the demons out:

We have to drive the devil out of Buenaventura, to see if we can restore the peace and tranquility that our city has lost due to so many crimes, acts of corruption and with so much evil and drug trafficking that invades our port…We want to go around the whole of Buenaventura, from the air, and pour holy water on to it to see if we exorcise and get out all those demons that are destroying our port, so that God’s blessing comes and gets rid of all the wickedness that is in our streets.

We wish him all the luck in the world, assuming that “luck” isn’t satanic. If it is, we don’t wish him any luck at all.

WASHINGTON POST CALLS LION KING MOVIE “FASCIST”
As everyone knows, Walt Disney was a virulent Jew-hating bigot, so even though he’s been dead for more than 50 years, it’s no surprise that his namesake media corporation continues to churn out endless propaganda that lionizes Hitler and crushes the weak under its iron bootheels.

We should therefore be thankful to the point of soiling our diapers and doubling our antidepressant dosage that Utrecht University media studies professor Dan Hassler-Forest, a man with a face that no woman has ever lubricated over, is brave enough to call out Disney in a wonderful and insightful new essay for the Washington Post.

Because Hollywood hasn’t had any new ideas in a couple generations, there is a new Lion King movie, and Hassler-Forest takes it to task for essentially being a remake of Triumph of the Will, one of the few movies which actually hasn’t had a remake or a sequel:

‘The Lion King’ is a fascistic story. No remake can change that….No matter how you look at it, this is a film that introduces us to a society where the weak have learned to worship at the feet of the strong…it places the audience’s point of view squarely with the autocratic lions, whose Pride Rock literally looks down upon all of society’s weaker groups — a kind of Trump Tower of the African savanna….With the lions standing in for the ruling class, and the “good” herbivores embodying society’s decent, law-abiding citizens, the hyenas transparently represent the black, brown and disabled bodies that are forcefully excluded from this hierarchical society.

What our society actually needs is a sequel of the Nuremberg Trials for anyone who has ever enjoyed a Disney movie.

STUDY: PSYCH DIAGNOSES ARE “SCIENTIFICALLY MEANINGLESS”
To our knowledge, there is no blood test that can quantify alleged “mental illnesses” such as bipolar disorder, schizophrenia, depression, anxiety, and PTSD. But when someone gets diagnosed as “having” any of these phantom diseases, many people act as if it’s as real as if have they actual diseases such as leukemia or genital warts. In reality, mental-illness diagnoses are based solely on the self-reports of troubled individuals who may be either delusional or prone to lying, combined with the subjective observations of indoctrinated quacks who may or may not be full of shit. We’ve been saying this for years.

From our own unscientific observations, psychiatrists are merely playing a guessing game in the service of shoving pills down patients’ throats.

A new study from the University of Liverpool tends to agree with us.

Perhaps it is time we stopped pretending that medical-sounding labels contribute anything to our understanding of the complex causes of human distress or of what kind of help we need when distressed.…Although diagnostic labels create the illusion of an explanation they are scientifically meaningless and can create stigma and prejudice. I hope these findings will encourage mental health professionals to think beyond diagnoses and consider other explanations of mental distress, such as trauma and other adverse life experiences.

If you don’t agree with that 100%, you are obviously some kind of psycho.