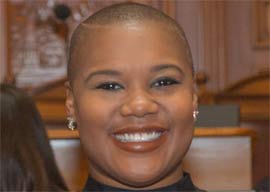 The Week’s Most Addictive, Constrictive, and Vindictive Headlines

FEMALE POLITICIAN’S HATE-CRIME HOAX UNRAVELS QUICKER THAN SHE CAN SCREAM, “RACIST!!!”
Erica Thomas is an aggressively dumb and juvenile black woman in Georgia with peroxided hair that’s only a quarter of an inch long, so of course she’s a member of the State House of Representatives.

The 31-year-old mentally challenged Democrat, apparently seething with jealousy that Jussie Smollett has hogged most of this year’s hate-hoax headlines, staged her own fake racial victimization at a Publix supermarket in the Atlanta suburb of Mableton on July 20. After pretending to be racially victimized by a white man who is a full head shorter and likely 100 pounds lighter then she is, Thomas recorded a video that depicts her sobbing and gasping for breath at the fact that, despite this being 2019 and all, the KKK clearly still rules America:

I decided to go live because I’m upset that people are really getting out of control with this, with this white privilege. So, I’m at the grocery store, and I’m in the ten aisle, that aisle that says ten items or less, yes, I had fifteen items, but I’m nine months pregnant and I can’t stand up for long and this white man comes up to me and said, “You lazy son of a bitch.” He said, “You lazy son of a bitch, You need to go back where you came from.” And he says that, and I said, “Sir, you don’t even know me. I’m not lazy. I’m nine months pregnant.” He says, “You’re ignorant. You’re ignorant.” And it hurt me so bad….And I couldn’t get anything out, I could just tell him, “please leave me alone…”

As anyone who’s ever had an unpleasant encounter with a black woman in public knows, the LAST thing they do is say, “Please leave me alone.” Surveillance video from the supermarket shows the white man entering from stage left and pointing to a sign, then quickly retreating out of the frame as Thomas goes full water-buffalo on him, wagging her finger and swiveling her head in the inimitable way that loud and enraged women of color are wont to do.

But while black women were wantonly aborting their babies and black gangsters were slaughtering one another in the streets nationwide, no one paid attention to it: Instead, Thomas’s tale of woe was the one to gain traction on social media. Beto O’Rourke, who may be the dumbest person ever to think he has a chance at being president, tweeted thusly:

These are the consequences of a president who foments hate every day—and sees our diversity not as a strength but as a weakness. Erica, thank you for serving your state and thanks to your husband for serving our country. We are better than this, and together, we will prove it.

The next day, Ms. Thomas mustered the strength to stand up for a really long time outside the grocery store where the near-lynching occurred as bloodthirsty members of the press threw peanuts in her mouth. Unluckily for her narrative, the alleged white hatemonger showed up, too—a certain Eric Sparkes, who made a point that despite his obvious Caucasianity, he was not white but was instead Cuban. And not only that, he insisted that he was a Democrat who hates Donald Trump. Sparkes promptly set about accusing Thomas of being a big fat liar, although he admitted to calling her a bitch:

I did say that. That’s all I said after that, and I walked out of Publix. Her words stating on Twitter, and her video, stating I told her she needs to go back where she came from are untrue….Everyone that knows me knows that I am anti-hate, anti-bigot and anti-racism….Sadly, too much of media isn’t fact-checking items or they are just taking the word of a politician when they do a live Facebook or a Twitter post.

An employee at Publix then hammered another nail in the casket containing Thomas’s narrative, stating that they heard THOMAS “continuously tell Eric Sparkes to ‘Go back where you came from!’”

DID JEFFREY EPSTEIN TRY TO KILL HIMSELF?
Serial pervert Jeffrey Epstein—whose wealth and possible incriminating knowledge regarding pedophilia among the high and mighty enabled him to scoot away smoothly with a cushy 13-month jail sentence when the FBI had compiled evidence that he’d victimized at least three dozen girls—continued to openly parade his ephebophilic lifestyle after his release from confinement, according to a new Vanity Fair profile.

An unidentified employee at the airstrip on St. Thomas where Epstein would fly in underage girls on his “Lolita Express” for the purposes of defiling them on his privately owned “Pedophile Island” says that Epstein made no attempts to hide what he was doing, and it didn’t appear as if local authorities in the Virgin Island paid him any mind:

The fact that young girls were getting out of his helicopter and getting into his plane, it was like he was flaunting it. But it was said that he always tipped really well, so everyone overlooked it….My colleagues and I definitely talked about how we didn’t understand how this guy was still allowed to be around children.

According to an air traffic controller at the same airstrip:

On multiple occasions I saw Epstein exit his helicopter, stand on the tarmac in full view of my tower, and board his private jet with children—female children….One incident in particular really stands out in my mind, because the girls were just so young….I could see him with my own eyes. I compared it to seeing a serial killer in broad daylight. I called it the face of evil.

Epstein, who was arrested by federal authorities on July 6 as he returned to the USA on a flight from France and is facing a potential 45 years in prison, was found last week “injured and in a fetal position” on the floor of his New York jail cell. Marks were found on his neck, which suggests that he attempted to hang himself…

…or maybe it suggests that his cellmate, a 49-year-old former cop named Nicholas Tartaglione who is facing charges for killing four men and burying them in his yard, attempted to strangle him to death.

After Epstein’s recent arrest, representatives for Bill Clinton released a statement that Clinton had taken “a total of four trips on Jeffrey Epstein’s airplane,” although flight records show that he flew on Epstein’s plane at least two dozen times.

What’s inarguable is that even if Jeffrey Epstein doesn’t want to die, several people would breathe more easily if he were to have a little accident in jail.

THOSE TEENS ARE AT IT AGAIN
Surveillance footage from outside the Washington, DC hotel where Ronald Reagan was shot in 1981 shows two paunchy white men being attacked by a group of about fifteen “teens,” which is a dog whistle for “youths,” which is coded racist speech for “youngsters.”

“Can we have ONE WEEK where people don’t freak the hell out over racial issues, or is that asking too much?”

The attack occurred at about 1AM on July 14 right outside the hotel entrance as the teens swarm like African killer bees and punch one of the males while bum-rushing the other one into apparent unconsciousness, punching and punching and kicking and kicking and kicking him one last time just to make sure he’s out cold. The teens consisted of both males and females, and one female teen is shown returning to the immobile white male merely to spit on him.

One of the men was left with a swollen eye, while the other suffered injuries to his head and left eye socket.

D.C. Mayor Muriel Bowser—who, despite rumors, has never been a member of 1950s nostalgia act Sha Na Na—warned that “this is not a game” and that the teens need to know that it wasn’t a “schoolyard prank,” either.

MARIANNE WILLIAMSON GETS SOMETHING RIGHT
Democratic presidential candidate Marianne Williamson is a confirmed witch who is nuttier than a bucket of macadamias. She threatens to unseat Donald Trump by the sheer force of her all-swallowing, sharp-fanged yoni and the vague promise that “love” is all we need, although that notion didn’t do much for John Lennon in the long run, now, did it?

But in a recent interview with the esteemed journalists at Buzzfeed News, Williamson’s chakras perfectly aligned to deliver some wisdom that was so pure, we’re tempted to send her a crystal necklace via Amazon:

Instead, Williamson referred to what pill-pushers term “clinical depression” as “normal human despair.” She has also suggested that antidepressants may cause as many suicides as they prevent.

STUDY: WHITE COPS NOT MORE LIKELY TO SHOOT MINORITIES THAN ARE NONWHITE COPS
Contradicting and undermining just about everything you’ve heard trumped and tuba-blasted from the media and academia for at least the past generation, a new study says that white police officers are not more likely to shoot nonwhites than are nonwhite cops.

Published last Monday in the Proceedings of the National Academy of Sciences, the study examined over 900 fatal police-involved shootings and concluded:

We find no evidence of anti-Black or anti-Hispanic disparities across shootings, and White officers are not more likely to shoot minority civilians than non-White officers.

It also found that in the overwhelming majority of fatal shootings, the victim had been armed.

But sure, burn another city or two to the ground anyway.

BLACK RAG DOLLS TARGETED FOR PHYSICAL ABUSE
Despite all the hate-crime hoaxes and fake racism that is constantly clogging our brain capillaries, it genuinely saddens us to announce that in this day and age, even after the Civil War and the assassination of MLK, three bargain-bin stores called the One Dollar Zone in the industrial wastelands of northern NJ thought it was OK to sell black rag dolls that carry the following message emblazoned on their chests:

Whenever things don’t go well/ and you want to hit the wall and yell, / here’s a little “feel better doll” / that you just will not do without./ Just grab it firmly by the legs and find a / wall to slam the doll, and as you wack / the “feel good doll” do not forget to yell / I FEEL GOOD, I FEEL GOOD

This doll is offensive and disturbing on so many levels. It is clearly made in an inappropriate representation of a black person and instructs people to ‘slam’ and ‘whack’ her. Racism has no place in the world and I will not tolerate it, especially not in this district.

Can we have ONE WEEK where people don’t freak the hell out over racial issues, or is that asking too much?