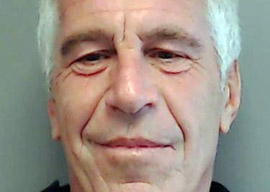 According to an msn.com article, “four people familiar with his thinking” claim that Epstein “hoped to seed the human race with his DNA” by impregnating twenty women at a time at his 33,000-square-foot ranch outside Santa Fe, NM—which, all things considered, provides a pretty backdrop for seeding the earth with pedophilic babies if that’s your bag.

Epstein, who is childless at 66, will likely either die or be killed in prison. As things stand, he fathered no children but apparently had sex with quite a few of them.

OH LORD, IT’S HARD TO BE A PROUD BOY
Although federal authorities arrested 234 alleged “anti-fascists” who tried burning down Washington, DC during Donald Trump’s inauguration, they promptly dropped all criminal charges against them.

The Proud Boys, a pro-West fraternal order founded by former Taki’s Mag contributor Gavin McInnes, haven’t been nearly so lucky. Despite the fact that the innumerable street clashes they’ve had across with country with Antifa always seem to have been instigated by Antifa, and regardless of the fact that they took great pains to distance themselves from “racists,” the SPLC has designated them as a “hate group.”

An event last October after McInnes gave a speech on the Upper West Side followed the pattern: As Proud Boys exited the event, they were surrounded on all sides by masked, screaming, obviously premenstrual Antifa members. In one street clash with four Antifa members, about ten Proud Boys clearly got the upper hand, and the State of New York appears unwilling to forgive them. Immediately after the event, two high-ranking Guidos named De Blasio and Cuomo publicly condemned the Proud Boys but uttered not a peep about Antifa.

The four Antifa members, to their credit, did not press charges nor so much as identify themselves to police. They are identified in official document only as Shaved Head, Ponytail, Khaki, and Spiky Belt. Because the alleged victims were unwilling to press charges, prosecutors were unable to charge the Proud Boys with assault; and because Antifa is clearly in the pocket of New York authorities, no one apparently even considered charging them with any crimes, regardless of the fact that they were filmed on camera throwing bottles at the Proud Boys, which was a crime the last time we checked. Instead, the Proud Boys were charged with attempted assault, disorderly conduct, and rioting, crimes which don’t require witnesses to obtain a conviction.

But last week, two defendants went on trial in a Manhattan courtroom, while a third is expected to go to trial in the fall.

Justice is clearly not blind in New York. It looks at your political beliefs as if they were gang colors, and at the moment, the Proud Boys might as well be Bloods in a state that’s run by the Crips.

BLACK TEEN SAYS HE DOESN’T LIKE WHITE PEOPLE, THEN SHOOTS AT WHITE PEOPLE
When a black mother names her son “Devonta,” is she sentencing him to prison straight from her dusky, swampy womb?

“As things stand, Jeffrey Epstein fathered no children but apparently had sex with quite a few of them.”

In a story that has gained no traction with the press for the usual reasons, 18-year-old Devonta Allen of Cincinnati allegedly fired multiple shots at four people who were riding in two separate cars while Allen shouted, “I don’t like white people in my hood.” (In case you were unaware, “hood” is a charming sort of urban shorthand for “neighborhood.”)

Three of the intended victims were white, while one was black. It is uncertain that Allen was aware that one of them was black.

According to authorities, Allen turned himself in and admitted to the shooting but claimed that the white people started it by firing at him first. Police say that Allen’s story is a big steaming pile of bull cookies.

Allen’s attorney says that his client has no “adult record,” which isn’t unusual for an 18-year-old. He did not mention whether Allen has a juvenile record as long and winding as the mighty Ohio River.

AFRICAN IMMIGRANT SHOVES BOY IN FRONT OF TRAIN IN GERMANY, KILLING HIM
German authorities claim that last week in Frankfurt, a 40-year-old migrant from Eritrea shoved an eight-year-old boy and his mother in front of a train, killing the boy while the mother was able to roll away between two tracks and survive. They also claim that he’d tried and failed to kill a 78-year-old woman using the same method at the same station. They also say that he was on the lam from Swiss police after an alleged incident where he threatened a neighbor with a knife while locking up his own wife and three children.

German prosecutors are suggesting that the suspect was suffering from a “mental disorder” rather than “racial hatred.” Instead, at a memorial ceremony, a German authority cautioned indigenous Germans not to let this senseless slaughter lead them into committing the sin of racial hatred.

Note to anyone who wishes to engage in warfare: Don’t ever lose, or you will never be forgiven for it.

ECUMENICAL CHRISTIAN GROUPS WARN AGAINST “CHRISTIAN NATIONALISM”
Even though Jesus claimed in the Gospels that he was the only way to salvation, many Christians worldwide have been convinced to honor and cherish other religions and pretend that they aren’t going to be howling for mercy in the Lake of Fire for all eternity.

Some weird-ass coalition of soft-brained globalist dupes calling themselves “Christians Against Christian Nationalism” are warning that a sinister cabal of theocratic Christians threaten to undermine our democracy and force all heretics into camps where they will be forced to poop their pants without toilet paper:

Yeah, but they’re not equal under The Bible, which is supposed to be your guidebook, right? If you insist on being a Christian, be a freakin’ Christian, not a half-assed Christian, because the Lord above created you with a full ass and it’s blasphemous to cast aside one half of your ass simply to appease the globalists.

On the tape, the normally stodgy Nixon is heard guffawing while Reagan makes the following lament:

Last night, I tell you, to watch that thing on television as I did…To see those, those monkeys from those African countries—damn them, they’re still uncomfortable wearing shoes!

The next day, Nixon said the following in a taped phone call with Secretary of State William Rogers:

Reagan called me last night, and I didn’t talk to him until this morning, but he is, of course, outraged. And I found out what outraged him, and I find this is typical of a lot of people: They saw it on television and, he said, ‘These cannibals jumping up and down and all that.’ And apparently it was a pretty grotesque picture…He practically got sick at his stomach, and that’s why he called. And he said, ‘It was a terrible scene.’ And that sort of thing will have an emotional effect on people … as [Reagan] said, ‘This bunch of people who don’t even wear shoes yet, to be kicking the United States in the teeth’ … It was a terrible thing, they thought.

That reaction on television was, it proves how they ought to be still hanging from the trees by their tails.

Nixon laughed at that, too. According to insiders, Nixon believed in racial differences in intelligence but wasn’t using this notion to exterminate blacks; instead, he was seeking to justify welfare handouts to them.

In the long run, is being called a monkey such a bad thing if you get a free check?

FBI: CONSPIRACY THEORIES = TERRORISM
It is far better to be “paranoid” than gullible, and anyone who doubts that those who are in power conspire to maintain that power are as gullible as the Norwegian winter is long.

It also makes the false assumption that ideas lead to violence, which is only true for people who can’t handle ideas and choose to be violent anyway:

The FBI assesses these conspiracy theories very likely will emerge, spread, and evolve in the modern information marketplace, occasionally driving both groups and individual extremists to carry out criminal or violent acts.

According to former FBI agent Michael German, the FBI is merely peddling “radicalization theory” in order to excuse their lust for power:

Muhammad Ali once said it’s not bragging if it’s true, so is it really a paranoid conspiracy theory if they’re actually conspiring?

FEMALE MODEL INSULTS TRANNIES, THEN LIES AND SAYS SHE’S A TRANNY, THEN APOLOGIZES FOR LYING
Carissa Pinkston is a freckled mulatto 20-year-old female model who just got herself into a heap o’ trouble for daring to question the sanctity of the transgender community.

Being Transgender does NOT make you a woman. It makes you simply Transgender…This is how they want to be perceived. In a biological context, there are Females and Males. This is the world in 2019.

Then, after being attacked by the Tranny Mobs and fired from her modeling agency, she wrote this:

I wasn’t ready to come out about it yet, but today I got fired and I’ve been receiving hate mail and death threats ever since, so I’m being forced to tell the truth. I’m Transgender….I transitioned at a very young age and I’ve lived my Life as a Female ever since. It’s been very hard to keep this secret but what I said about Trans-Women is a direct reflection of my inner insecurities and I have since come to realize that I am a Woman…WE ALL ARE!

Then, after a tranny model who knows Pinkston accused her on Twitter of lying about being a tranny, Pinkston sought to save face yet again after her initial attempt at face-saving imploded:

I apologize for any transphobic remark I’ve ever made towards the Trans community. I panicked and I thought if I came out as Trans that I could somehow make things better for myself, but it appears I’ve only made things worse….I’m truly sorry. I’m only 20 and I’m human. I make mistakes but I refuse to let them define me. I hope you all can forgive me and move on from this because I’m so much more than this incident and I’m not a coward.

Of course you’re a coward. Or at least you became one shortly after being brave enough to speak the truth.

According to lead researcher Christoph Bartneck:

The bias against black robots is a result of bias against African-Americans….It is amazing to see how people who had no prior interaction with robots show racial bias towards them….Imagine a world in which all Barbie dolls are white. Imagine a world in which all the robots working in Africa or India are white. Further imagine that these robots take over roles that involve authority. Clearly, this would raise concerns about imperialism and white supremacy.

To a brainwashed lunatic it might raise concerns, but it wasn’t too long ago that all the world’s Barbie dolls were white, and it seemed like heaven compared to today.