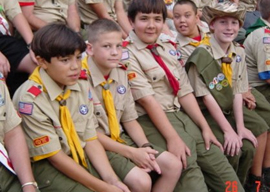 The Week’s Most Imbecilic, Coprophilic, and Pedophilic Headlines

BOY SCOUTS: A NEST OF PEDOS?
The Boy Scouts of America are involved in a decades-long attempt to conceal a “pedophilia epidemic within their organization,” according to a group of lawyers who filed a suit Tuesday against the group.

Representing a group with the catchy name “Abused in Scouting,” the lawyers claim that their dogged research has uncovered 350 predator scoutmasters who diddled and fiddled with approximately 800 victims who in no way, shape, or form expected to become rape victims when they strapped on their neckerchiefs and took an oath to be prepared.

According to attorney Andrew Van Arsdale:

Many of the victims can still recall the smell of the man who crawled into their bag.

In response, the Boy Scouts of America admitted that they’ve kept files on “ineligible volunteers”—i.e., boy-touchers—since at least the 1920s.

The group also is allegedly considering filing for Chapter 11 bankruptcy protection in wake of all the lawsuits being launched against it accusing scoutmasters of taking illicit carnal liberties with boys entrusted in their care.

Protip: If you don’t want to attract pedophiles, maybe it’s a good idea not to make “Boy” the first word in your organization’s name.

HORSE-RIDING TEXAS COPS PARADE BLACK MAN THROUGH STREETS ON A ROPE
Donald Neely is a 43-year-old homeless man in Galveston, Texas who is described by his sister as “mentally ill” and prone to jumping out of moving cars when you merely try rescuing him from the streets and taking him back home again.

He is also the father of eight children, none of whom he sees or cares for because he’s too busy wandering around downtown Galveston wearing a welding mask.

Still, does that justify a pair of white cops on horses parading him on the streets with a rope attached to his handcuffs as they transport him from one police facility to the next?

Not according to Terrie Cotton, who is identified as the mother of one of his eight children and wrote the following after pictures were posted online showing her former mating partner being led around on a rope as if he were a common donkey:

I may not speak to him daily .Hell its [sic] been years since I have .But he is still my child’s father and this has broke [sic] my heart .He is not a threat to any he is very kind hearted [sic] and would help anyone.No [sic] on [sic] deserve [sic] to b [sic] threaten [sic] in this manner.He [sic] is not a dog r [sic] slave they have went [sic] to [sic] far .I pray he is ok and the police that did this r [sic] fired.

Did it ever occur to this subliterate baby mama that the police may be the least of her problems?

“If you don’t want to attract pedophiles, maybe it’s a good idea not to make ‘Boy’ the first word in your organization’s name.”

Galveston police say that Neely was trespassing and had been warned multiple times to knock it off before they pulled the rope trick on him. Galveston’s police chief, a black man, says that the rope trick is a legal procedure while acknowledging that it is perhaps bad optics, although he likely didn’t use the term “bad optics” and probably doesn’t even know what it means.

DAYTON SHOOTER LOVED SATAN AND KARL MARX
There were two mass shootings last weekend within 13 hours of one another—the first was at a Walmart in El Paso that left, at last count, 22 dead; the second was in Dayton, OH that left nine dead. You’ve likely heard a lot more about the first than the second shooting, and probably not so much because of the body count but because the first shooter expressed concern for declining white demographics and support for Donald Trump.

It doesn’t seem to matter that Betts—who was shot dead by police who arrived at the scene 30 seconds after he began shooting up a bar and killing a half-dozen blacks in the process—killed his own sister and her boyfriend before attacking random Negroids at a bar.

It doesn’t irk them that he described himself as a “leftist” who supported Elizabeth Warren and tweeted “Kill every fascist” in the wake of 2017’s debacle in Charlottesville, VA.

It doesn’t bug them in the slightest that he was reportedly suspended from high school after scrawling a “hit list” in the bathroom detailing everyone he wanted to kill.

The media has barely bothered to mention the strange paradox that Betts was vocally anti-gun yet killed nine people.

Forgive us, if you can, for suggesting the reason that none of this seems to bother them because, apart from the whole killing-nine-people thing, Connor Betts was one of them.

URUGUAY ISSUES TRAVEL ALERT FOR CITIZENS TRAVELING TO USA
Last Friday, the US State Department issued a travel advisory warning for Uruguay due to a spike in violent crime in the tiny South American country that everyone and their brother confuses with Paraguay.

In an apparent stroke of spiteful retaliation, on Monday Uruguay issued a travel advisory warning for citizens traveling to the United States in wake of the two mass shootings that transpired over the weekend.

In a press release posted on the website of Uruguayan President Tabare Vazquez, travelers considering a jaunt to the USA were urged to gird themselves against danger “in the face of growing indiscriminate violence, mostly for hate crimes, including racism and discrimination, which cost the lives of more than 250 people in the first seven months of this year

Wait just a minute—how can the violence be “indiscriminate” and reflect “discrimination” at the same time, Pancho?

The press release advised Uruguayans to especially avoid cities such as Detroit (39.8 intentional homicides per 100,000 inhabitants), Baltimore (55.77), and, for some reason, Albuquerque, which lags far behind the other two not only in its intentional-homicide rate (12.47), but in its quotient of black people. Albuquerque is less than three percent black, whereas Detroit (82%) and Baltimore (63%) are no slackers in the realm of Negroidics. By contrast, Uruguay’s principal city Montevideo boasts a modest intentional-homicide rate of a piddling 11.6 victims per 100,000 residents.

THE DEATH OF 8CHAN?
Since March of this year, the shadowy internet message forum 8chan has been “linked” to three “racist” mass shootings—in Christchurch, New Zealand (where 51 Muslims were gunned down); Poway, CA (at a synagogue where the gunman only managed to kill one Jew); and in El Paso last week, where at last count twenty-two mostly brown people bit the dust.

Prior to the Christchurch massacre at Linwood Islamic Center in March, shooter Brenton Tarrant posted links on 8chan to his Facebook livestream of his shooting only moments before at the Al Noor Mosque. He also posted a link to his manifesto, The Great Replacement. Strangely, web colossus Facebook—which was the only site that hosted the killings in vivid video as they happened—didn’t get blamed like 8chan did.

Prior to April’s synagogue shooting in Cali, alleged gunman John T. Earnest posted “what I’ve learned here [on 8chan] has been priceless.”

And as we reported last week, prior to the El Paso massacre, alleged shooter Patrick Crusius posted a manifesto on 8chan that identified the rifle that would be used in his killing spree.

In reaction, Cloudflare—a web service with nearly 20 million clients which it protects from DDoS attacks—dropped their protection of 8Chan. In a press release, Cloudflare CEO Matthew Prince justified their decision by referring to 8Chan as a “cesspool of hate.”

After a brief spell offline, 8Chan reemerged with protection from a similar service called BitMitigate, which promptly dropped them after its parent company stated that “We do not tolerate hate speech in any form.”

On Tuesday, the House Committee on Homeland Security summoned 8Chan’s owner Jim Watkins to appear before them to testify about the board’s links to mass shootings. However, it was unable to find a home address for Watkins, who has reportedly lived on a pig farm in the Philippines since 2004. Last April, in response for similar calls for 8Chan to be shut down, Watkins’s son tweeted that it apparently wasn’t enough for the censors-that-be that the site routinely deleted pro-violence posts within minutes.

ROSANNA ARQUETTE REVEALS HER INTENSE SHAME AT BEING “WHITE”
Rosanna Arquette is described in the first line of her Wikipedia profile as a “Jewish American actress.”

Despite this, and in keeping with the “fellow white people” meme, she tweeted on Tuesday how much it rips her soul to pieces to have been born Caucasian:

I’m sorry I was born white and privileged. It disgusts me. And I feel so much shame.

Well, it disgusts us that you’re disgusted. How ’bout them apples?

In the face of a backlash that Arquette claims further ripped the remaining shreds of her soul to pieces, she made her Twitter account private at what she says was the urging of the FBI.

Doubling down on her prideful feelings of shame, she told The Wrap:

I said yesterday that I am ashamed of the color of my skin. I am privileged just because I’m white. I feel shame. Because of all the violence that is happening in America and other racist countries.

Put a cork in it lady. Either that, or go be disgusted with your skin color in a less “racist” country, provided you can find one.