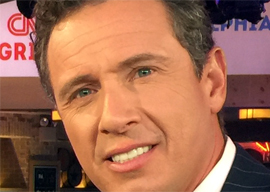 WHY CHRIS CUOMO NEEDS TO LEGALLY CHANGE HIS NAME TO “FREDO”
In perhaps what is the most significant event for the Italian-American community since Sylvester Stallone decided to sing the theme song to Paradise Alley, CNN anchor Chris Cuomo was caught on camera acting like a stereotypical NYC Dago douchebag last Sunday evening.

At press time it remains unclear whether the person who called him “Fredo”—a reference to the weak Corleone brother in the Godfather movies—was purposely taunting him or sincerely believed that was his name, as he claims. The unidentified victim of Cuomo’s greasy outburst says he only knew of Cuomo through Rush Limbaugh, who purposely belittles the oily CNN anchor because, all things considered, both his brother Andrew Cuomo and father Mario Cuomo ascended to the governorship of New York, while little Chris is left reading the news.

Punk-ass bitches from the right call me Fredo. My name is Chris Cuomo. I’m an anchor on CNN. Fredo is from The Godfather. He was a weak brother and the use of it to an Italian is disparaging ….They use it as an Italian aspersion. Any of you Italian?…it’s an insult to your fucking people. It’s like the N-word for us….I’ll fucking ruin your shit. I’ll fucking throw you down these stairs like a fucking punk.

It’s not an “Italian aspersion,” you dumb meatball, it’s a specific reference to the weakest brother in a powerful family. And to say it’s “like the N-word” is not only hyperbolic, it proves that, amid all your steroidal, cologne-addled bluster, you’re scared to death of saying the N-word.

Never mind that Cuomo once referred to himself as “Fredo” in a radio interview with Curtis Sliwa, founder of the anti-crime street-sweeping Guardian Angels attack squad and, apparently, erstwhile radio host.

CNN issued a statement defending Cuomo from acting like a ball-tugging Sicilian ape by stating “he was verbally attacked with the use of an ethnic slur.”

Would Cuomo have reacted the same if a nonwhite person called him “white boy”? And would CNN have had his back if he threatened violence against his antagonist? Non è molto probabile.

The bigger problem, however, is the “Streisand Effect.” By flipping out publicly about being called “Fredo,” Chris Cuomo has let the world know that having it publicly acknowledged that he is the failed son of his family pushes him to the brink of violence, every anonymous keyboard sadist on the Internet will get their jollies calling him “Fredo” every day for the rest of his life. If he had any smarts and merely wasn’t just a stupid eggplant on hairy legs, he’d change his name to Fredo Cuomo and pretend it still doesn’t sting inside.

E.U. MAY SLAP WARNING LABELS ON IMPORTED JEWISH-MADE GOODS
In a move that is reminding many Jews of the Holocaust—which isn’t to say that many things remind many Jews of the Holocaust all the time—the European Union appears ready to pass a law mandating that all consumer goods made by Jews in occupied Palestinian territories be labeled as coming from “settlements” and “Israeli colonies.” Items made by Muslims in the same area will receive the more benign-sounding label of “Palestine.”

The law follows on the heels of a similar law in France, which, as it so happens, is being overrun with Muslims.

According to Yohan Benizri, a lawyer with an extremely Jewish-sounding name who represents a winery that would be affected by the new law, Jews are hypocritically being singled out for scorn:

Can you imagine a situation where plastic cups imported from China must be labeled ‘this country has a one-child policy,’ or gas from Russia must be labeled, ‘This is gas from a country that illegally occupies Crimea,’ or products from the United States require the labeling ‘the U.S. engages in capital punishment and is building an illegal border wall?’ Product labels will have become political billboards depending on the whims of EU politicians, and every EU importer will shoulder a liability for not complying with arbitrary labeling laws.

He has a point. No wonder so many of them are lawyers.

FORCED STERILIZATION AT CHINESE “RE-EDUCATION” CAMPS FOR “EXTREMIST” WOMEN
The main reason you don’t hear too many horror stories coming from China is because China owns the USA and can sell us all into slavery at the wink of one of their slanted eyes.

“Both his brother Andrew Cuomo and father Mario Cuomo ascended to the governorship of New York, while little Chris is left reading the news.”

But women who’ve survived China’s “re-education” camps—where you can be sent without committing any crime and jailed without trial merely for being suspected of “extremism”—now say that they were unwittingly sterilized at the camps. Since so many of these women are Uyghur Muslims—who comprise less than 1% of China’s population and have been targeted by the majority population for “re-education”—some suspect it’s part of a deliberate attempt to commit genocide against this pesky non-Chinese minority group.

We had to stick our arms out through a small opening in the door. We soon realized that after our injections that we didn’t get our periods anymore.

Another woman says she was “tired for about a week, lost my memories and felt depressed” after being injected with unidentified drugs at a Chinese detention camp in 2017. After she made her way to the United States recently, doctors informed her that she’d been sterilized.

This is why we laugh bitterly when it’s suggested the Chinese takeover of Africa will be much kinder and more benign than European rule was on the Dark Continent. Unlike Europeans, Asians only seem to feel guilt for betraying themselves.

SHOULD MEMBERS OF THE “FAR RIGHT” BE ALLOWED TO MAKE CA$H ON YOUTUBE?
It’s hard to believe that in this day and age, after Hitler and the KKK and that kid who shot up the Walmart, people still think that other people have a right to make money expressing their opinions.

A recent article in The Times fairly gasps for air with indignation that Mark Collett, a former member of the British National Party who has said nice things about Adolf Hitler and mean things about refugees, is allowed to take cash donations from willing donors who contribute “Super Chat” money to his YouTube livestreams.

Last month, Collett even had the audacity to declare:

“Jews have been thrown out of countries so many times for the things they’ve done.”

As anyone who’s virtuous, intelligent, and sane knows, Jews have been thrown out of countries so many times because of anti-Semitism.

By the end of the article, though, one realizes that YouTube has already stripped Collett of the right to make money through his hatemongering videos, so we’re not entirely sure why the article exists in the first place.

According to police in the town of Bradenton, Edwards asked her ofay beau to play a game of “slave and slaver” as part of their sexy time, causing Atkins to spit in her face in indignation—even though, if you really think about it, spitting in a black woman’s face is the kind of thing a slave-master would do.

Their spitting spat apparently caught the attention of neighbors, and police were called. Edwards said she didn’t want her lover boy to go to jail, which is sort of bittersweet in a way. According to the police report:

Ashley stated she wanted to play slave and slaver because she is African American and he is Caucasian….Kenneth did not wish to partake and became verbally aggressive…[and] spat in her face.

If Paul McCartney and Stevie Wonder can get along, we have hope for Kenneth Atkins and Ashley Edwards. If they can’t, that loogie he hocked on her face may very well become the Ft. Sumter of the Global Race War.

ANDERSON COOPER SAYS THE GREAT REPLACEMENT IS “EXCITING”
Anderson Cooper is the gay son of a fashion heiress. His brother committed suicide. We don’t know much else about him, because we don’t watch CNN.

In an interview last week with Jorge Ramos of Univision—who is obsessed with demographics and exults in the fact that whites will soon be a minority in the nation they founded—Cooper said that the idea of inevitable and irreversible white demographic decline is “exciting” to him:

The idea that, you know, whites will not be the majority, I mean, that’s — it’s an exciting transformation of the country, it’s an exciting evolution. And, you know, progress of our country in many different ways. Clearly there’s, you know, among white supremacists, white nationalists that is viewed as a horrific event.

Perhaps he has a point. Any world in which a mediocrity such as Anderson Cooper can achieve such prominence may in fact be tilted unfairly in favor of white people who’ve been spoiled from birth.