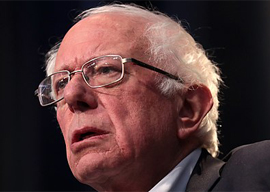 BERNIE SANDERS FINALLY BLOWS A GASKET
It has long been an established fact that not only is Bernie Sanders the angriest man in politics—he may be the angriest man who ever lived. For all the jibber-jabber you hear about how Donald Trump is seething with anger and hatred, anyone with an open heart and a functioning set of eyeballs could tell that at any given moment, Bernie Sanders was a mere fidgety “OY!” away from a debilitating stroke.

Last week, while Joe Biden was once again forgetting his own name and swallowing his dentures, the 78-year-old Sanders—who, if you recall, is so far into his dotage that he smashed his head on a shower door in the spring which necessitated a huge, embarrassing bandage on his head—finally succumbed to his own self-directed lifelong path of impotent rage and had some sort of cardiac event that landed his wrinkled, pickled ass in a Las Vegas hospital for surgery on a blocked artery.

From his hospital bed, the crabby, doddering socialist—who wants us to believe that a man who can’t even keep two screaming hippos in check is qualified to sit on our nuclear arsenal—exploited his own near-death experience to make some political point about “Medicare for All.”

Senator Sanders, you are only a victim of your own hatred and envy. We shed not a tear for you and hope that you’ve learned your lesson.

NEW YORK MAKES IT ILLEGAL TO SAY “ILLEGAL ALIEN”
In New York City—where you can already be fined a cool quarter-mil merely for stating the fact that a man who claims he’s a woman is still a man—you can now be fined an additional $250,000 for stating the simple fact that an illegal alien is an illegal alien, provided that the authorities are able to determine that your weird obsession with the truth was spawned from a deep-seated inner hatred.

According to a 29-page directive issued by City Hall’s Commission on Human Rights—which apparently exists to sue you into pauperdom if you exercise the basic human right of free speech—not only are you forbidden from calling a spade a spade, you are even forbidden from threatening to call authorities and tell them that someone has committed a crime by being in this nation unlawfully.

The directive explains why the term “alien” is hurtful and is thus deserving of harsh, exacting, painful punishment:

‘Alien’ — used in many laws to refer to a ‘noncitizen’ person — is a term that may carry negative connotations and dehumanize immigrants, marking them as ‘other.’ The use of certain language, including ‘illegal alien’ and ‘illegals,’ with the intent to demean, humiliate, or offend a person or persons constitutes discrimination.

It then goes on to propose several potential scenarios in which the sin of hate can be committed:

A hotel prohibits its housekeepers from speaking Spanish while cleaning because it would ‘offend’ hotel guests or make them uncomfortable….An Indian immigrant family complains to their landlord about mold and cockroaches in their unit. The landlord tells them to ‘just deal with it’ and threatens to call ICE if they file a complaint in housing court….A store owner tells two friends who are speaking Thai while shopping in his store to ‘speak English’ and ‘go back to your country.’

Even the simple basic human act of making fun of someone’s accent can now burden you to the tune of $250,000.

Why do people think that overpriced, overcrowded, open-air mental hospital is a great place to live again?

MIGRANTS RAISIN’ HELL IN GREECE
It seems as if nothing good ever comes from Lesbos.

Ungrateful Afghan migrants on the Isle of Lesbos have been raising a stink in protest of overcrowded camps, a problem they could have avoided merely by staying in their sparsely populated and prehistoric homeland.

But no, just like all modern migrants, they need to poop where they eat and make their hosts regret ever being nice to them. On the Sunday before last, spoiled and petulant migrants set fire to an olive grove outside their camp, killing a mother and her child. In a separate incident, the Greek driver of a speeding car carrying 12 Afghan migrants—some of them huddled in the trunk as if they were common Mexicans—ran a red light and was killed. One migrant was seriously injured and three others slightly injured. But that speeding car is a metaphor for Greece—killing itself while trying to save others.

ILLINOIS: ABORTION CAPITAL OF THE MIDWEST
If you’re a woman who lives in Missouri and are so irresponsible that you spread open your legs like the Jaws of Life and allowed a man to shoot his filthy seed inside you without contraception but seek to murder the tiny life growing inside your body, you may be chagrined to realize that the entire state harbors only a single abortion clinic—and one that is fighting constant legal attempts to shut it down.

Illinois, on the other hand, is one giant fetal meat-grinder, which has pregnant woman from across the barren and ugly Midwest flocking there to rid themselves of their unwanted spawn. And since August of 2018, Planned Parenthood has been building a super-secret mega-clinic in Illinois a mere 13 miles from Missouri’s only abortion facility, one that will sate the feticidal cravings of 11,000 women every year. It’ll be like one giant, airplane hangar-sized homicidal vacuum cleaner chewing up fetuses before they ever have a chance to smell a flower or see the sunshine. And if you find that remotely distasteful, it’s because you hate women and fear their vaginas.

LATEST PRETEEN DREADLOCK-CHOPPING HATE-CRIME HOAX SENDS NATION INTO SPIRAL OF DESPAIR
If there’s anything that will set race relations in the USA back 400 years, it’s the tendency of certain Peeps of Color to fabricate violent acts of hatred against themselves because they are either unable or unwilling to conceive of a world in which white people aren’t constantly boiling over with hatred for them.
Amari Allen is a 12-year-old black girl who attends Immanuel Bible Church in northern Virginia. She recently garnered national headlines after claiming that three white boys at the church held her down, called her ugly, and chopped off her dreadlocks in a searing act of racial hatred.

The press naturally ran with the story like Jesse Owens running from German Shepherds until Allen admitted she’d made the whole thing up. The New York Times, which should be dragged before an international tribunal for denying the Holodomor, made a point of noting the accuser’s race and that of her alleged assailants when the story broke, while it magically scrubbed their races in the headline to the follow-up story.

The church pastor publicly apologized for the fact that little Amari smeared their reputation but felt the need to insist that “our nation was sewn from the fabric of racism,” and even if young black girls are exploiting that fact now, we must always keep our eyes on the prize and never forget all the evil that was done long before any of us was born.

It also can’t stand the biological reality of sexual dimorphism, which is why it recently voted to bleed taxpayers to the tune of $195 million merely to remove all urinals from the Portland Municipal Building. That amount of money could be used to cut every single homeless person in Portland a check for $14,000, but no—the City Matriarchs decided it was more important to spare the one-tenth of one percent of the population that identifies as a gender different from the one they were correctly assigned at birth the extreme discomfort of seeing a urinal and being reminded that we are born with anatomic differences that make it impossible for women to void their bladders in urinals.

Portland, will you please do the right thing and secede?

HILLARY CLINTON: DEALING WITH BILL WAS LIKE TAKING CARE OF A TRANSGENDER CHILD
World-famous husband-batterer Hillary Clinton—who, for all we know might have a huge penis and a pair of testicles the size of avocados—recently used a disturbing simile to explain why she decided to stay by her husband Bill’s side even after he humiliated her by getting humjobs from a chubby female intern half her age.

She likened it to an experience she had with a friend whose little girl claimed she wanted to be a boy. They all researched the topic of transgenderism and offered the helpful advice that, sure, it won’t mess up your child’s mind to indulge their delusion, because it’s not as if, hey, nearly half of all “transgender” people attempt suicide or anything.

But yes, she actually said that sticking with Bill was a noble and “gutsy” move akin to avoiding the sin of transphobia with a deluded young child, rather than a cunning and ice-cold power move from a woman who makes robots look compassionate.

KANSAS CITY MAN RAPES AND KILLS HIS DAUGHTER, BLAMES SLAVERY
Jerry Bausby is a 43-year-old black man from Kansas City, MO, who was recently sentenced to consecutive life sentences for raping and murdering his daughter, whom he cursed from birth by naming her “Daizsa.”

According to a prosecutor, Bausby only mentioned his daughter once in a 45-minute speech at his sentencing, instead focusing on “racism and what he viewed as slavery in modern America as forming him into what he was.”

Funny—as far as we can recall, slaveowners discouraged slaves from murdering their children because it cut into the profit margin.

STUDY: WHITES LEAST LIKELY TO USE “HATE SPEECH” ON TWITTER
It’s always a treat when “anti-racist” technology that is constructed solely to depict whites as irredeemable agents of hatred winds up proving quite the opposite. A recent study at the University of Cornell in which artificial intelligence was programmed to detect “hate speech” and “offensive content” found that on Twitter, “tweets written in African-American English are abusive at substantially higher rates.” It also concluded that “black-aligned tweets” are “sexist at almost twice the rate of white-aligned tweets.

What’s depressing is that they apparently needed a robot to tell them this. Have they been sleeping under a rock for the past generation?