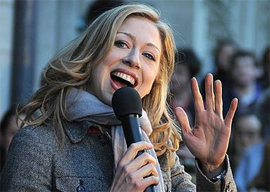 The Week’s Most Twisted, Tightfisted, and Blacklisted Headlines

CHELSEA CLINTON SAYS WOMEN CAN HAVE BEARDS AND PENISES
Chelsea Clinton is celebrated around the world as giving Amy Carter a run for her money as the homeliest First Daughter in presidential history.

She has never accomplished a thing in her life and has never hatched an original thought from her brain. She recently published a book called Gutsy Women with her mother, the universally feared carpet-muncher and husband-batterer Hillary Clinton, and we can already tell it’s more full of shit than a Port-A-Potty.

While being interviewed by The Sunday Times about women and their guts, though, the mother/daughter tag team showed that they still bear their respective generations’ biases about whether it’s possible for women to have beards and penises.

Chelsea says “yep.” Hillary—who is rumored to have a clitoris over twelve inches long—says “nope”:

Errr. I’m just learning about this. It’s a very big generational discussion, because this is not something I grew up with or ever saw. It’s going to take a lot more time and effort to understand what it means to be defining yourself differently….I think you’ve got to be sensitive to how difficult this is. There are women who’d say [to a trans woman], ‘You know what, you’ve never had the kind of life experiences that I’ve had. So I respect who you are, but don’t tell me you’re the same as me.’ I hear that conversation all the time.

Chelsea disagreed, saying she encourages men with rippling muscles and testosterone levels over 1,200 to compete in women’s sports and batter them unconscious—so long as the deluded men’s feelings are spared.

It marked a stark and irreconcilable difference between the two gals, seeing as how Hillary Clinton has never cared about men’s feelings in her life.

AIR CANADA GOES GENDER-NEUTRAL
If you live in Canada, you have our sympathies. Not only do you inhabit a meat locker, you live in a country that has contributed zero to world culture and is about 15 years further down the psycho-progresso rabbit hole compared to the USA.

In honor of “gender fluidity”—which exists only in people’s minds and not in nature, which is firmly dimorphic—Air Canada has vowed to make its employees—100% of whom were born with either a penis or a vagina—to stop announcing “ladies and gentlemen” and instead refer to them with a simple “everybody.” For its dirty and feral French-speaking citizens, Air Canada will jettison “mesdames et messieurs” in favor of a nondescript “tout le monde.”

The measure is intended to guard the absurdly fragile feelings of the one in every thousand people who are in a constant state of denial about the genitals they were awarded at birth. Pay no mind to whether it makes the other 999 people feel uneasy or even queasy.

It is illegal in Canada to discriminate against someone based on their gender delusions, while it is encouraged to club white men over the head as if they were baby seals.

BRATTY YOUNG WHITE GIRL LOSES NOBEL PEACE PRIZE TO NOBLE BLACK MAN
Greta Thunberg is an annoying young Swedish girl who refuses to acknowledge her white privilege and scoffs at the idea of letting a young Somalian or Bangladeshi female take up the banner of Climate Change Hysteria in her stead. She seems to think she’s really cool and that everyone should listen to her, when in reality she’s just an uppity poopy-head who needs a new haircut.

“If you live in Canada, you have our sympathies.”

In Vegas, the odds were that Thunberg would be awarded the Nobel Peace Prize for suggesting that the United States should become a Third World Country and let India and China stomp us into extinction because, um, the climate is changing or something.

Sorry, you snot-nosed little white girl—the Peace Prize has instead been awarded to Ethiopia’s Prime Minister Abiy Ahmed for actually, you know, bringing peace upon the earth by engineering an end to the 20-year-old Eritrean conflict, which started years before Greta Thunberg was even born.

No one has explained to Greta that the modern world is complex and different and…people in Africa or in many Asian countries want to live at the same wealth level as in Sweden. Go and explain to developing countries why they should continue living in poverty and not be like Sweden. I’m sure that Greta is a kind and very sincere girl. But adults must do everything not to bring teenagers and children into some extreme situations.

Is there any way we can make him our next president?

SOUTH AFRICAN “HATE CRIME PSYCHOLOGIST” BUTCHERED TO DEATH IN HER HOME
In yet another example of virtue-signaling yourself to death, a South African female psychologist who has posed for years as an expert on “hate crimes” has been stabbed to death and had her throat slit by a group of black armed robbers who broke into her house through the ceiling after ensuring that her husband had left to attend synagogue.

Miriam Wilks, 69, received a Ph.D. in Hate Crimes—yes, there’s actually a doctorate for that—from the University of South Africa last year. She was born in Israel, moved to Australia, and finally landed in South Africa, where her arduous efforts in attempting to understand how “hate” works revealed that she didn’t understand the first thing about it.

Her husband Frank returned from synagogue to find his wife of 45 years lifeless and soaked in her own blood. If he’d returned from church, you probably never would have heard this story.

FIGHTING RACISM IN THE MIDWEST
The city of Madison, WI, boasts a black population of only 7%, which is barely half the national average. Just like so many other places that are understocked with black people, Madison sends itself into conniptions over this thing called “racism”—something that usually only occurs in the presence of more than one race.

Madison recently declared that racism is a “public health crisis” based on the fact that blacks apparently have health problems that the city fathers have concluded are entirely unrelated to their personal habits and despite the fact that black women outlive white men in America. They also mentioned something about the shooting of unarmed black people but failed to note that 93% of cases, it’s another black person shooting them.

In Oak Park, Illinois, a white woman named Susan Buchanan—who is a dead ringer for legendary college hoops coach Bob Knight—recently went on a tirade against all the city’s other elected officials for being a bunch of ignorant white male oppressors—even the mayor, who is a Palestinian immigrant but whom she scolded because his skin is “light enough”:

I am so tired of hearing two white men tell us what systems of oppression are. You have been white from birth. Why are you arguing what is a system of oppression? You’ve never experienced it, so shut up! I don’t want to hear from you!…You are not oppressed people and people in Oak Park are and we are trying to recognize that as a community….This mayor and this board is obviously not willing to face history. We have a chance to make history. It is time for this community to face equity. Enough!…You are a white male! You stop it, you are a white male!

It is quite clear that anyone who has had to spend five minutes in this woman’s presence has experienced oppression.

ILLEGALS IN AMERICA: 11 MILLION OR 22 MILLION?
For years now we’ve heard that there are 12 million illegal aliens in America, and they just keep coming.

Despite the fact that they just keep coming, some sly dog downgraded the total to 11 million, and that number has stuck in the public consciousness.

But citing a study by MIT, immigration official Ken Cuccinelli—whom some suspect is being groomed as Donald Trump’s Secretary of Homeland Security—says the number is closer to 22 million.

We need to send them back to do all the jobs Mexicans won’t do.