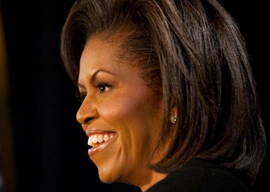 The Week’s Most Hateful, Fateful, and Ungrateful Headlines

MICHELLE OBAMA CONDEMNS WHITE FLIGHT FROM CHICAGO AFTER FLEEING CHICAGO TO LIVE ON A NEARLY ALL-WHITE ISLAND
Whether or not Michelle Obama has a penis or represents some sort of evolutionary missing link is beyond the purview of this discussion. Those are both legitimate topics that deserve some journalistic deep-diving, but that’s not the topic of our discussion today.

The topic is that this former First Lady with a posterior on which you could comfortably rest a table lamp appears to be a hypocrite of the highest order.

At the Obama Foundation Summit—yeah, apparently that’s a thing—she decried white flight in Chicago, which apparently started around the time she and her parents moved into a mostly white neighborhood and people started vamoosing in alarm because they didn’t want to become sacrificial lambs that the elites had offered up to appease black people’s resentment for crimes that were almost exclusively perpetrated by the elites:

There were no gang fights; there were no territorial battles. Yet one by one, they packed their bags, and they ran from us. And they left communities in shambles….Y’all were running from us, and you’re still running, because we’re no different than the immigrant families that are moving in, the families in Pilsen, the families that are coming from other places to try to do better.

So what you’re trying to say is that the gang fights only started after the white people left, but somehow this is white people’s fault?

Both Barack and Michelle Obama have spent most of their lives in Chicago—specifically, the South Side. In early September, it was announced that they were buying a $15-million dollar estate on Martha’s Vineyard.

No further questions, Your Honor.

GREEK PEASANTS TOSS ROCKS AT SMELLY MIGRANTS
We assume that the lion’s share of migrants across the globe have tremendous body odor. This may be bigoted, but we’d rather be called bigoted than have to smell a single migrant’s armpits.

Greece, the alleged cradle of Western Civilization, is becoming one of the Third World’s primary dumpsters. The country currently suffers a backlog of roughly 70,000 asylum claims. Its legendarily beautiful islands are in danger of capsizing due to the weight of an estimated 20,000 illegal migrants.

As officials were quietly and perhaps stealthily trying to bus nearly 400 migrants into the town of Nea Vrasna recently, they were impeded by “dozens of villagers” who formed a human shield and blocked the road, hurling rocks at buses and shouting unconscionable and deeply unmindful things such as “close the border” and “throw out illegal migrants.”

If anyone has video footage of this event, please let us know. We’d like to combine it with a soundtrack of that song where Bob Dylan sings, “Everybody must get stoned.”

COP GETS $19 MILLION FOR BEING TOLD TO “TONE DOWN YOUR GAYNESS”
In a purely professional sense, is it possible to be too gay?

According to St. Louis Police Sgt. Keith Wildhaber, several officers in his department seem to think so. He claims that after applying for a promotion in 2014, a member of the Board of Police Commissioners told him that if really wanted the job, he would need to “tone down your gayness.”

“Nineteen million dollars is quite a pretty penny for being called a fag. Hell, for a mere thousand semolians, we’ll do the best Rip Taylor impression you’ve ever seen.”

Wildhaber, who has really big and floppy ears, just walked away $19 million dollars richer and not even a smidgen less gay after suing St. Louis County for discrimination.

During the trial, one witness alleged there’s a virulent outbreak of homophobia in the department because one policeman said that the Bible claims homosexuality is an abomination.

But that’s exactly what the Bible says. And not only that—it mandates the death penalty for homos.

Nineteen million dollars is quite a pretty penny for being called a fag. Hell, for a mere thousand semolians, we’ll do the best Rip Taylor impression you’ve ever seen.

TENNESSEE POL CALLS MAYOR BUTTPLUG “A QUEER RUNNING FOR PRESIDENT”
Speaking of fags, one of them is running for president and is currently out-polling every other Democratic candidate besides Elizabeth Warren in Iowa.

This apparently chafes the thermal underwear of a certain Warren Hurst, a Commissioner in Sevier County, TN, home of Dollywood. Hurst looks like the type of guy who lives in the Tennessee mountains and hates sodomites while sitting on the porch and whittling wooden toys for his grandkids.

It’s time we wake up people, it’s time, it’s past time. We got a queer running for president, if that ain’t about as ugly as you can get.

To be fair, Hubert Humphrey might have been uglier. And Abraham Lincoln’s face was known to scare horses, especially when he was clean-shaven.

WHY TRANNY ATHLETES WILL DESTROY THE TRANSGENDER MOVEMENT
The world of sports, like the realm of intelligence testing, is a direct threat to the worldwide egalitotalitarian agenda because just like IQ tests, sports give lie to the idea that we’re all equal. Men routinely crush women in every athletic endeavor.

“Trans Athletes Are Posting Victories and Shaking Up Sports,” ululated a headline on wired.com last week as if it was a good thing—and it is, but not in the way they seem to have intended:

No serious journalist uses the word “cisgendered,” but plenty of silly hired propagandists do.

But male-to-female trannies are to sports what Asians are to intelligence testing. The University of California system awards admissions based on academic merit. The state is only 12% Asian, but Asians account for a robust 40% of enrollments. The playing field is equal, but the players obviously aren’t.

Same applies to men who think they’re women and compete in women’s sports. While pretending that men are actually women because to think otherwise is to risk career suicide, the International Olympic Committee shows its hand and admits that gender is more than a social construct by imposing mandatory upper limits for testosterone levels among MTF athletes.

Beyond that, women seem to have an innate need to feel that they’re special and deserve special treatment and extra attention, so don’t expect them to sit by placidly forever as she-males snatch all the gold medals and the glory.

Combine the insatiable biological need of females for attention with the biological fact that the male hormone testosterone leads to superior athletic performance, and it’s only a matter of time before an army of shrieking women send all these trans athletes back to the drag-club runway.

WHY AMERICA DOESN’T NEED THE WASHINGTON POST
Richard Stengel is a former editor of TIME magazine. We had never heard of him until we ran across a recent Washington Post OpEd he did called “Why America needs a hate speech law,” and it immediately caused us to hate him.

Yes, the First Amendment protects the “thought that we hate,” but it should not protect hateful speech that can cause violence by one group against another…. Speech doesn’t pull the trigger, but does anyone seriously doubt that such hateful speech creates a climate where such acts are more likely?

Yes. We seriously doubt it. You know what causes violence? The conscious decision to act violently. Words do not. This is the first thing they teach you in anger-management class.

Therefore, we recommend that Richard Stengel be sentenced to ten years of anger management.