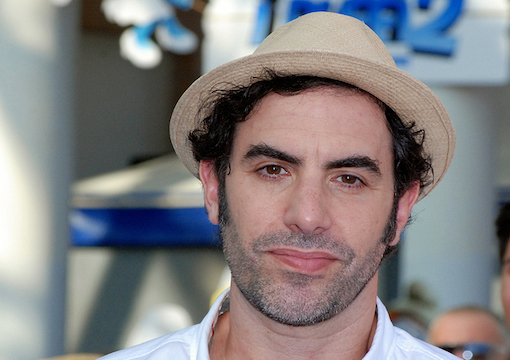 The Week’s Most Avaricious, Repetitious, and Meretricious Headlines

“BORAT” ACTOR: THROW THE HATERS DOWN THE WELL
It is said that comedic actor and satirist Sacha Baron Cohen makes fun of everyone, including Jews, but if you pay attention, he makes fun of people who hate Jews and almost everyone else—except for Jews, which may be related to the fact that making fun of them would represent a professional conflict of interest.

With a net worth of $130 million, Cohen obviously lives in a tiny little insulated and temperature-controlled bubble which has led him down a path of delusion to the point where he believes that Big Tech actively promotes white supremacy and anti-Semitism—and he’s not joking.

Without even the slightest wisp of irony, the alleged satirist accepted an award from the Anti-Defamation League—a group which holds social media in a headlock and destroys anyone who strays an inch from the orthodoxies they mandate—to allege that social media is a viper’s nest of Nazis and Aryan supremacists and hatemongers and racial chauvinists and people whom God clearly did not choose.

Cohen called out the “Silicon Six”—a half-dozen billionaires who rule the tech industry—accusing them of running “the greatest propaganda machine in history” and caring “more about boosting their share price than about protecting democracy”:

This is ideological imperialism — six unelected individuals in Silicon Valley imposing their vision on the rest of the world, unaccountable to any government and acting like they’re above the reach of law. It’s like we’re living in the Roman Empire, and Mark Zuckerberg is Caesar.  At least that would explain his haircut.

It bears noting that four of those six billionaires—Mark Zuckerberg, Larry Page, Sergey Brin, and Susan Wojcicki—are co-ethnics with Cohen and everyone who runs the ADL.

He even said that Facebook would have eagerly partnered with Adolf Hitler, which is the funniest thing he’s ever said.

EXACTLY HOW MUCH OF A CRACKHEAD IS JOE BIDEN’S SON?
Joe Biden’s son Hunter—the one who didn’t die—has been in and out of rehab a half-dozen times and acknowledged that he repeatedly bought crack cocaine from homeless people in LA. After his brother Beau died of cancer, Hunter started banging Beau’s widow, causing his own wife to divorce him and leading to a new marriage with a woman he’d known for less than a week. He’s also involved in a paternity suit with some skank from Arkansas.

Despite all the attempts at rehabilitation that started years ago, as late as last year, Mr. Biden was spotted dropping “thousands of dollars” at a DC strip club and forcing workers to warn him to maybe smoke his crack somewhere else. According to a former manager of Archibald’s Gentlemen’s Club in DC:

There was a smell of burning Styrofoam in the VIP room. We told him nothing illegal can go on here. We didn’t see anything illegal. After he was spoken to, the smell stopped. VIP employees suspected it was crack.

As everyone knows, burning crack smells like Styrofoam, whereas burning Styrofoam smells like crack. So he obviously was smoking crack. So now, simply because Biden’s crack-smoking and manwhoring son was involved in some dodgy deal with Ukrainian businessmen, Donald Trump may be impeached.

If that sounds like justice to you, forget about getting a Christmas card from us.

WOMAN ARRESTED, CHARGED WITH SEX CRIMES FOR BEING TOPLESS AT HOME
Tilli Buchanan is a self-described feminist in her late 20s who lives in Utah. Her face is nothing to write home about—in fact, it could probably keep an entire flock of crows off a cornfield—but since this is about her breasts, they seem reasonable to us.

Late in 2017 or early in 2018, Tilli and her husband were hanging drywall in their garage. They were both topless because they say they didn’t want their clothes to get dusty—apparently neither one of them has a problem with their nipples getting dusty, though. At some point while they were letting their jugs flap in the wind, three of her husband’s children from a previous marriage walked into their garage.

The children ranged in age from 9 to 13 and apparently ran and tattled to their biological mom, who said she became “alarmed” and called the police, and it obviously had nothing to do with jealousy that her ex-beau was with a new woman, because it’s a biological fact that women never use the law to punish men who no longer find them desirable.

In February, Buchanan was charged with three misdemeanor accounts of lewdness involving a child. If convicted, she faces possible jail time and could be forced to register as a sex offender for ten years.

She says she’s being unconstitutionally prosecuted because her husband was not arrested for flashing his nips in front of the kids. Even though she might be a drunken slut, we’re going to take her side on this because there is no question that male nipples are objectively more distasteful than female nipples.

THE TERF/TRANNY WARS, CONT.
“TERF” is an acronym for “Trans-Exclusionary Radical Feminist,” a term of derogation used to describe a woman who says that women’s issues are exclusive to biological women and that men who pretend they’re women are party-crashers and genital-appropriators who want all of the pity that comes with being a woman without any of the suffering, especially the monthly bleeding.

Rachel Ara is a woman that many would mistake for a very ugly man. She claims she has been “openly gay for 35 years,” but one look at her mug makes us think that lesbianism is not her sexual preference as much as it is an island of last resort for a lousy female specimen who kills the mating drive in every male who beholds her unfortunate visage.

Even though she apparently lacks even a droplet of charisma, Miz Ara was slated to give a speech about, oh, vaginas and art or something at Oxford Brookes University until some perpetually aggrieved casualty of gender dysphoria caught wind of the fact that Ara might as well be Hitler for embracing such a debunked, hateful, and dangerous idea as “women are women.” According to a letter pecked out by the weirdos at the local LGBTQ+ society:

Rachel Ara is a trans exclusionary radical feminist who frequently shares transphobic discourse on her social media. She has openly showed support for the ‘LGB Alliance’, which is openly transphobic and seeks to isolate trans people within the LGBTQ+ movement. While this speaker may be invited under the pretence of academic freedom, we firmly believe that inviting such speakers infringes upon academic freedom at Oxford Brookes.

Serious question: All other things being equal, would your average tranny or your average TERF win a mud-wrestling match?

39 DEAD IN FOILED MIGRANT-SMUGGLING SCHEME
Although American media has been almost entirely silent about the story, one would think that the real-life saga of 39 impoverished Vietnamese migrants seeking a better life in England—only to suffocate en masse in the back of a truck trailer en route to their final destination—would be a big news story.

After all, even John Wayne Gacy didn’t kill 39 people.

It’s certainly more people than the KKK has killed in the past few generations.

And it’s more people dead in one shot than there are unarmed black people being shot dead by police in America every year, and we’re all aware of what a huge fuss people make about that.

In late October, an Irish truck driver named Maurice Robinson reportedly passed out when he opened the back of his truck’s refrigerated trailer to find 39 frozen corpses.As detectives began piecing the saga together, it became apparent that Robinson was part of an Irish criminal syndicate that was working in cahoots with Vietnamese criminals to smuggle migrants into the UK.

Why isn’t this a bigger story? Because according to The Narrative, immigration is good for everyone and this sort of thing never happens.

TELEVANGELIST: IMPEACHMENT PROCEEDINGS ARE A “JEW COUP”
Christian TV pastor Rick Wiles is different from most modern televangelists in the sense that he doesn’t worship the Zionist state and realizes that all the love evangelicals have for Israel is entirely unrequited.

That’s the way the Jews work, they are deceivers, they plot, they lie, they do whatever they have to do to accomplish their political agenda. This ‘impeach Trump’ effort is a Jew coup and the American people better wake up to it really fast because this thing is moving now toward a vote in the House and then a trial in the Senate….People are going to be forced, possibly by this Christmas, to take a stand because of this Jew coup in the United States. This is a coup led by Jews to overthrow the constitutionally elected president of the United States and it’s beyond removing Donald Trump, it’s removing you and me. That’s what’s at the heart of it. You have been taken over by a Jewish cabal….There will be a purge. That’s the next thing that happens when Jews take over a country, they kill millions of Christians.

BLACK NBA STAR REFERS TO BLACK WOMEN AS “BULLDOGS”
Patrick Patterson is a power forward with the NBA’s Los Angeles Clippers. Like many successful black athletes, he married a white woman who is at least three feet shorter than he is while insisting it had nothing to do with racial status-signaling.

When someone on social media recently taunted Patterson that if he was not a millionaire athlete he’d probably be stuck with some nappy hood rat, he defended his wife’s valor while taking a swipe at all black women:

So I should settle for a bulldog and act like I’m happy with my life and preach ‘keep it in your race’ to the world as if Dr. King didn’t fight/die for equality, acceptance, all cultures loving one another, and no hate? No thanks. That maybe [sic] your life but I don’t want that for mine or my family. Color doesn’t matter. Wake up.

After the predictable furor erupted in the wake of his comments, Patterson apologized—but not to bulldogs.