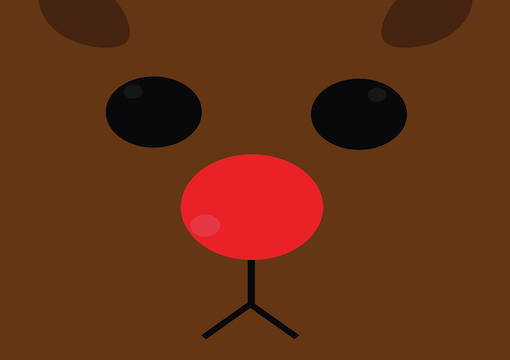 The Week’s Most Seductive, Obstructive, and Destructive Headlines

Because it’s 2019, people are naturally looking for ways to depict Santa and his elves as Hitler and the SS.

We’ve all been able to read between the lines and realize that when Rudolph is forced to put on a “black” nose to hide his “red” nose, what the screenwriters are secretly trying to tell us is that he’s a “black” man trying not to get lynched in a “white” man’s world.
Twitter twats also took Santa Claus—the ultimate Old White Boomer Male—to task for running a sweatshop and exploiting the labor of hardworking reindeer and the strange and presumably sexually insatiable undersized human genetic mutants known as elves:

Ultimately, you have to blame Santa for the bullying culture at the North Pole. Donner is just middle management. Santa put pressure on his reindeer, so they felt like they had to have the perfect children.

Between Rudolph and Hermie…The North Pole seems like the most toxic work environment to ever exist. Ruthless bullying and then banishment to the Island of Misfit Toys.

Did you ever get in one of those moods where the only people you truly wish to bully are people who complain about bullying?

The entire Jewish World and all of its satellite possessions exploded in perfectly understandable outrage when it learned that Amazon.com was selling tasteless memorabilia related to the persecution and destruction of precisely 6,000,000 Jews in World War II.

One such item was a bell-shaped tree ornament featuring a photo of the Auschwitz death camp in Poland, which some anonymous joker apparently thought was downright hilarious.

Another was a magnetic bottle opener with a photo of Auschwitz that misidentified the camp as “the former Jewish district in Krakow,” which, again, some faceless coward seemed to think was the funniest thing in the whole darned universe.

The Auschwitz Museum—have you ever wondered whether they sell snacks and beverages there?—expressed its stern and morally unimpeachable disapproval of the death-camp-themed tchotchkes:

Selling Christmas ornaments with images of Auschwitz does not seem appropriate. Auschwitz on a bottle opener is rather disturbing and disrespectful.

Depending on how you look at the Holocaust—and if you don’t look at it in the officially approved way, we’re calling the cops on you—executives at Amazon either saw the error of their ways, buckled to public pressure, or kissed the rabbi’s ring and begged the rabbi not to hurt them. They promptly removed the tacky genocidal kitsch and issued an effusive and likely insincere apology.

COLIN KAEPERNICK SAYS WE MUST “HONOR OUR ELDERS,” CONTINUES SHAMING HIS PARENTS
In world history, has there ever been a black baby adopted by white parents who turns out to be even the tiniest bit grateful? Or do they all turn into insufferable Black Power Guerrilla Mafia retards?

“Because it’s 2019, people are naturally looking for ways to depict Santa and his elves as Hitler and the SS.”

The white parents who adopted him say they’re OK with all his “I’m black, y’all” jibbety-jabber he’s been making ever since his athletic skills began their slow decline, but their eyes tell a different story. Their eyes tell a sad tale of heartache and betrayal and self-abasement and racial vengeance from the boy with the massive, banana-shaped proboscis that they lovingly took under their gentle white wings.

Kaepernick, worth an estimated $20 million, said something about “indigenous struggles.” He also stressed the need to “honor our ancestors and honor our elders,” even though we suspect that his actions are making his adoptive parents die a little bit inside each day. Later in the day he tweeted some gibberish about “white fears of Black equality.”

Brothers and sisters, we will never have true equality until we all follow the same capitalization scheme. It’s either “white and black” or “White and Black.” You can’t have it both ways. That’s what leads to slavery—and always for the group that’s not getting capitalized.

We actually believe that if black people can commit themselves to learning and practicing good and consistent grammar, Rodney King’s dream of us all getting along will one day come true.

But some wise black couple who were already blessed with the surname “Julmeus” beat us to the punch by naming their little boy Evenaud.

Evenaud Julmeus is a 30-year-old black man who lives in Haines City, FL who allegedly did everything we outlined in our screenplay idea above. He left his preteen boy—who has not been publicly named but whom we would like to believe is named Evenaud Julmeus, Jr.—with a duffel bag containing clothing but no money or food or phone.

In the end, Evenaud Julmeus did the right thing—he turned himself in and is facing charges of negligent child abuse without bodily harm.

“MUHAMMAD” BECOMES ONE OF USA’S TOP 10 BABY BOY NAMES
Whereas fifty years ago, the only person in the USA named “Muhammad” was Muhammad Ali (we made that up, but cut us some slack), the name “Muhammad” and all its variant spellings has finally crept up into the top ten names for baby boys in these here United States.

While nearly all of those names are absolutely repulsive, “Muhammad” is by far the most troubling, for obvious reasons—we don’t like Muslims because they’re sneaky. It is also the most overused boy’s name in the world, with an estimated 150 million Muhammads walking around the planet, nearly all of them with tremendous body odor.

On the girls’ side, the Arabic name “Aaliyah” crept into the top ten as well, hovering there at the bottom of the list just like Muhammad but waiting to rise, rise, rise.

File this story under “not cool at all.”

YET ANOTHER STUDY SAYS DIVERSITY IS A WEAKNESS, NOT A STRENGTH
Diversity researcher Robert Putnam has been saying this for years until someone apparently dragged him into a dark room and scared him, because now we hear he’s been backtracking and saying that all the different takeout menus and spicy cuisines are a good thing, but DIVERSITY IS NOT A STRENGTH. The very word “diversity” had severely negative connotations until its rebranding in the early 1990s.

A new university study from Denmark confirms Putnam’s findings as well as those of any others who bothered to soberly examine the subject: There is a “statistically significant negative relationship between ethnic diversity and social trust across all studies.”

The study, a “meta-analysis of 1,001 estimates from 87 studies from Western countries” led researcher Peter Thisted Dinesen to conclude:

To be clear, the overall negative relationship between residential ethnic diversity and social trust is statistically significant and holds up when conditioning on a range of potential confounders and moderators….Extant studies have relatively consistently reported a significant negative relationship between neighborhood-level ethnic diversity and various forms of social trust.

The study’s findings were supported by professor Erick Kaufmann at Birbeck University of London:

Higher diversity is significantly associated with lower trust in communities, even when controlling for deprivation.

Yeah, sure, whatever, but we still get all those different takeout menus.

YOUNG ENGLISHMAN “DEDICATED HIS LIFE TO HELPING OTHERS,” GETS STABBED TO DEATH BY ONE OF THE OTHERS
Jack Merritt was a 25-year-old University of Cambridge graduate who was stabbed to death on London Bridge last Friday afternoon by a convicted Muslim terrorist who was released from prison last year after serving only six years of a 16-year sentence.

Jack earned a Master’s degree in criminology with a dissertation titled “A Critical Analysis of Over-Representation of Black, Asian and Minority Ethnic Males Aged 18-21 in the British Prison System.”

Hours before he got stabbed, Jack gave a lecture at a conference on prisoner rehabilitation. The ex-con Muslim terrorist who would later kill him had attended the conference and was thrown out for unruly behavior.

While his son’s blood had barely dried from a high-profile murder, Jack’s father warned us that to notice the irony in any of this would be to push an agenda of “hate.”

This caused us to immediately hate Jack’s father.