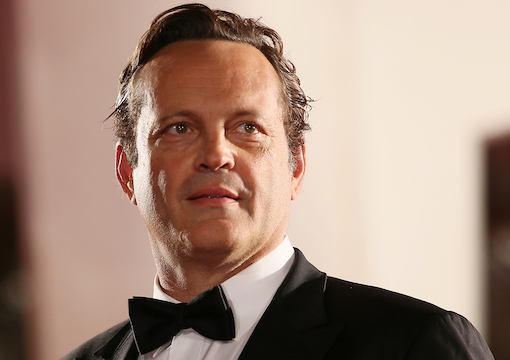 The Week’s Most Pointed, Anointed, and Disjointed Headlines

VINCE VAUGHN CRUCIFIED FOR NOT KILLING THE PRESIDENT WHEN HE HAD THE CHANCE
Standing a mere inch or two shy of eight feet tall, Vince Vaughn is a mediocre actor who has never been in a great film. He has starred in a string of anemic and mildly retarded Hollywood comedies which in a generation will be more forgotten than Orson Bean’s valet or Edward Everett Horton’s podiatrist.

Like actors such as Jon Voight, Mel Gibson, and Clint Eastwood, though, Vaughn differs from most of Hollywood in that he doesn’t take his marching orders from some vaginismus-afflicted, man-castrating, gleefully baby-aborting Democratic Party apparatchik. He claims to be a “conservative,” an essentially meaningless stance that only becomes brave when one considers that in Hollywood, it’s an act of career suicide.

Last Monday night at the College Football National Championship, Vaughn did the Hollywood equivalent of blowing out his brains on live television—he took a moment to speak cordially with President Trump. From all appearances, it was a friendly conversation.

Seeing as how Trump has openly encouraged a nihilist wave of right-wing white-nationalist violence that threatens to become another Holocaust even though nothing we just said is remotely true, Vaughn’s Hollywood cohorts lambasted and demonized and ostracized and tut-tutted him.

The climate is such that it’s controversial for a major Hollywood star to be friendly with the president.

There were recriminations, death threats, and murmurs about a second Civil War. Triggered people accused the people who triggered them of being snowflakes, who in turn mocked them for being triggered. The left said the right was intolerant. The right said, no, that’s you who are the intolerant ones. People stopped talking to one another. Then everyone went home. Some of them ate a sandwich. Others, quite likely, stayed up all night and tweeted. Perhaps even one of them killed themselves, and as things currently stand, Vaughn might be the only sane one in the bunch.

Mind you, we’re not encouraging anyone to kill themselves. But the way things are, we can understand the temptation.

NYC SANCTUARY LAW ENABLED DUSKY ALIEN TO RAPE AND MURDER 92-YEAR-OLD WOMAN
Reeaz Khan is a 21-year-old illegal immigrant from a backwards country called Guyana. The fact that he’s an illegal alien and is still in our country is evidence that our country is broken.

Even though we’re pretty sure the War Between the States was fought because the South disobeyed the federal government, we’re not sure how that’s different from several progressive mayors’ current practice of declaring one’s city to be a safe sanctuary for illegal immigrants to flout federal law. Isn’t there already some kind of law against saying, “Hey, you—that’s right, you—please come to my city and break the law”?

As already implied, this “Khan” dude—who has that sort of atavistic indigenous South American tree-swinger look as if Dee Dee Ramone and Mowgli from the Jungle Book cartoon had a baby—should have been ejected from this country merely for being here without permission. But he was freed without bail in November for assault and gun charges. And despite an ICE request to hold him for deportation, he was released.

“The climate is such that it’s controversial for a major Hollywood star to be friendly with the president.”

Surveillance footage suggests that it was Khan who raped and murdered 92-year-old Maria Fuertes late at night January 6 on a street in Queens. The woman, known to locals as “Grandma,” had ventured out into the bracing cold to buy cat food. Police say Khan attacked her and dragged her to the ground during a struggle, whereupon he raped her and left her lying “incoherent” on the street with a broken spine and rib fractures.

Fuertes died later at the hospital.

Khan, showing the sort of stupidity that serves as a further argument why he should never have been let into this country, told detectives that, yes, he was present at the crime scene but, no, he did not attack her. He said he chanced upon the woman lying on the ground and was trying to help her up when suddenly “he fell down, his belt broke, his pants fell down and his penis fell near her vagina.” He reportedly confessed to detectives that he suffers from “uncontrollable urges” and that “something came over him,” at which point he “’lifted up Fuertes’s skirt and [tried] to put his penis inside of her.”

A few days later in an interview with the New York Daily News, Khan scoffed at the idea that he would ever need to rape a 92-year-old woman, noting that he had a girlfriend and had, in the past, engaged in sexual relations with other women who weren’t nonagenarians.

BERNIE BRO SAYS HE WANTS TO PUT “NAZIS” IN CAMPS
Kyle Jurek is a scruffy communist with a ridiculous beard who encourages a violent overthrow of the billionaire class on behalf of the international workers’ movement. Judging from our extensive experience observing such characters, we’d bet anything that he inherited a huge trust fund and has never toiled at an honest working-class job in his life.

Jurek is also a paid staffer on the presidential campaign of the eternally appopleptic Bernie Sanders, whom we thought had been permanently derailed by a heart attack only a few weeks ago.

In a recent filmed interview with the undercover rascals of Project Veritas, Jurek spouted the same insane totalitarian and fact-free mind-reading nonsense about how everyone who opposes Bernie is a “fascist” who openly encourages the literal genocide of everyone who doesn’t match their racial phenotype and therefore must be greeted with a terrifying wave of preemptive violence if we don’t want another Holocaust and all the endless movies that a second Holocaust would necessitate:

The only thing that works, the only thing that fascists understand is violence. So, the only way you can confront them is with violence….I mean, we gotta try, so like, in Nazi Germany after the fall of the Nazi party there was a shit-ton of the populace that was fucking Nazified. Germany had to spend billions of dollars re-educating their fucking people to not be Nazis. Like, we’re probably going to have to do the same fucking thing here. That’s kind of what Bernie’s whole fucking like, ‘hey, free education for everybody!’ because we’re going to have to teach you to not be a fucking Nazi….If Bernie doesn’t get the nomination or it goes to a second round at the DNC convention, fucking Milwaukee will burn….We’re gonna make 1978 [1968] look like a fucking girl scout fucking cookout. Remember what happened when McGovern [McCarthy] got fucked in Chicago in 1978 [1968]? Riots. Fucking people getting beaten by the cops. The cops are gonna be the ones that are getting fucking beaten in Milwaukee. They’re gonna call up the National Guard for that shit. I promise you that. If Bernie doesn’t, if they fucking take Bernie from us, then we have nothing else left to lose.

This idiot thinks the DNC riots in Chicago happened in 1978 and had something to do with George McGovern. He’s also advocating violence and riots against “Nazis” while pretending that “Nazis” run America.

BALTIMORE WINS THE S.T.D. AWARD; PEORIA MAKES THE TOP 20
If you are one of those small-minded people who thinks that Baltimore only excels in murder, rioting, racial segregation, and rodent infestations, you need to broaden your horizons—CDC data says that Charm City has the highest rate of STD infections in the entire nation!

In raw numbers, Los Angeles takes the cake, with over 90,000 reported cases of people who wound up with an unwanted affliction after an amorous encounter. Then come, in order, Chicago, Houston, Phoenix, and Philly. Of the 50 states, California had the highest total number of infections, followed by Ohio and Texas.

But as far as per-capita infections go, Baltimore stands proudly alone as the only American city of 150,000 or more people with more than 2,000 STD cases per 100K in population. Other cities that made the Top 20 include San Francisco (of course), Milwaukee, and Peoria, which suddenly sounds more interesting to us.

Half of the cities in the Top 20 were in the South, which is to be expected. There isn’t much to do down there besides having sex.

But sometimes, there’s a dark side.

After using Grindr to arrange a casual sexual hookup, a bald and obese 25-year-old Michigan hairstylist named Kevin Bacon—no, not that Kevin Bacon—was “found hanging upside down with his testicles cut off” at the residence of Mark Latunski, a man who vaguely resembles Rasputin, on Devember 28. Authorities suspect that Latunski had also cooked and eaten Bacon’s balls.

Grindr is clearly a symptom of a sick society. We need to return to a traditionalist framework in which homosexuals meet one another at church.

Brimelow is an affable fellow with a thick British accent that requires subtitles. Although well into his 70s, his leonine mane of hair makes him look like he could be singing for Herman’s Hermits in Vegas.

He recently made the extremely wise move of suing The New York Times to the tune of $5 million for labeling him an “open white nationalist.”

If the Times actually practiced journalism instead of peddling ideology, they would realize that to qualify as a “white nationalist,” much less an “open” one, someone would have had to have said, at least once in their 70+ years, something along the lines of “I desire an all-white nation.”

Brimelow has never done this. Then again, hardly any of the people whom the press routinely smear as “white supremacists”—and in this day and age, it’s a smear on the level of “child molester”—ever come close to fitting the dictionary definition of a white supremacist.

We wish Brimelow good fortune in his lawsuit. In the event that he wins, we hope it sets a precedent. They can’t keep getting away with this.