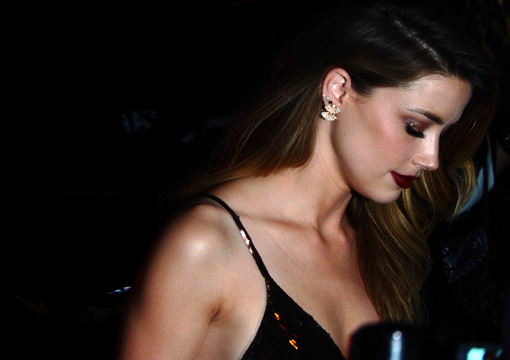 The Week’s Most Abusive, Elusive, and Intrusive Headlines

LEAKED TAPES REVEAL AMBER HEARD, NOT JOHNNY DEPP, WAS THE VIOLENT ONE
Johnny Depp was an actor who, until he overdid it with the booze and drugs, was considered by women across the world to be an absolute cutie-pie.

His ex-wife Amber Heard is a fire-crotch bisexual who has gained most of her fame by accusing Johnny of beating her.

They married in 2015 and got divorced 15 months later amid accusations of domestic abuse. In August 2016, Heard agreed to an out-of-court settlement to the tune of $7 million with the understanding that she’d shut the hell up about being a poor battered woman.

In December 2018, Heard broke the agreement by writing an OpEd in the Washington Post claiming to be the victim of horrid domestic abuse by a man she did not name but whom everyone assumed was Depp.

In May of 2019, Depp slammed his ex with a $50-million defamation lawsuit, claiming he was axed from his role as Captain Jack Sparrow in those dumb pirate movies because of her insinuation that he’d smacked around the half-lesbian during their marriage. The suit stated that Heard, not Depp, was the violent one of the pair:

…while mixing prescription amphetamines and non-prescription drugs with alcohol, [Amber Heard] hit, punched and kicked me. She also repeatedly and frequently threw objects into my body and head, including heavy bottles, soda cans, burning candles, television remote controls and paint thinner cans, which severely injured me.

Because we’ve been trained to believe and sympathize with women in any dispute she may pick with a man, most people believed Heard and stigmatized Depp.

Then last week the Daily Mail released a recording from October 2015—while the pair were married but for some reason were recording themselves arguing over exactly who was abusing whom. In the recording, Amber not only admits to hitting Depp—she says she’d thrown vases, pans, and pots at him the night before:

I’m sorry that I didn’t, uh, uh, hit you across the face in a proper slap, but I was hitting you, it was not punching you. Babe, you’re not punched….I don’t know what the motion of my actual hand was, but you’re fine. I did not hurt you, I did not punch you, I was hitting you….I can’t promise you I won’t get physical again….God, I fucking sometimes get so mad I lose it. I fucking promise you I can do everything to change.

The leak came hot on the heels of another recording of a conversation the pair recorded sometime between separating and the divorce settlement. They are discussing an event that happened in Australia shortly after they were married in which, according to Depp, Heard “went berserk” after he asked her to sign a “postnup,” leading her to throw a bottle at him which shattered and ripped off his fingertip. Depp is calm throughout the call, while Heard sounds like a shrieking violent dyke:

You can please tell people that it was a fair fight, and see what the jury and judge thinks. Tell the world Johnny, tell them Johnny Depp, I Johnny Depp, a man, I’m a victim too of domestic violence….And I, you know, it’s a fair fight. And see how many people believe or side with you…. Have I ever been able to knock you off of your feet? Or knock you off balance?… You’re going to get up on the stand, Johnny, and say, ‘she started it’? Really?

Naturally, Heard’s supporters, enablers, and legal counsel are in full Gaslight Mode, saying that Depp is merely practicing the sort of evil manipulation so common to abusers: He is projecting his own guilt and violence onto a fragile, innocent victim.
Too bad anyone who hears those tapes can instantly tell in their guts who was malicious and who was trying to keep the peace.

When the lid finally goes back on top of Pandora’s Box, we need to weld it shut this time.

CAMP R.A.T.T.: A WHOLE TOWN FOR HOMELESS PEOPLE!
If you thought homeless people were just a bunch of mentally unstable, genetically deficient and ethically repugnant drug addicts, sex perverts, and layabouts, we agree with you.

“When the lid finally goes back on top of Pandora’s Box, we need to weld it shut this time.”

But in a tent city that sits in an empty cement lot off US 183 in East Austin, TX, a gaggle of hobos has declared their little patch of concrete a sovereign village called “Camp R.A.T.T.: Responsible Adult Transition Town.”

Let’s not mention the highly sensitive fact that, if these bums were remotely responsible, they wouldn’t be in this position well into adulthood. According to the R.A.T.T. secretary Cori Roberts:

We give everybody a chance. We don’t judge your past history or nothing like that….We wanted to show people that we’re not just criminals, drug addicts, slobs, bums off the street…That we’re actually just like anybody else in this community, just without a house.

Well, without a job, too. And without many teeth. And definitely without soap. If you want us to treat you like humans, you’ll have to come up with something better than this.

MISSOURI BILL WOULD JAIL LIBRARIANS FOR LOANING SEXY BOOKS TO MINORS
Many civil libertarians and right-leaning activists concerned with free speech and the deplatforming of political dissidents sounded alarums last week at a proposed Missouri bill that would potentially jail librarians for loaning out “inappropriate” reading material.

MUSLIM FATHER IN ENGLAND WOULD RATHER GO TO JAIL THAN HAVE HIS SON LEARN ABOUT TRANS ACCEPTANCE IN SCHOOL
Jabar Hussain is a burly 51-year-old Muslim father who lives in Birmingham, England, but for now we won’t call for his deportation or enslavement.

After withdrawing his nine-year-old son Amin from school—again, we’ll deal with the fact that there are nine-year-olds named “Amin” in British schools at some point in the indeterminate future—over the fact that he was being forced to read books such as And Tango Makes Three—an illustrated fable about two gay penguins who adopt a baby—and Introducing Teddy, which is about a male teddy bear who feels in his heart that he’s a girl, Hussain was informed that he may be liable to arrest and imprisonment.

He says he is willing to be jailed to protect his son from growing up gender-confused.

If only indigenous Britons were as principled over the fact that people named “Jabar” and “Amin” are now living in Britain, they might still have a country over there.

MINISTER ANNOUNCES “FAGGOTS ARE MAGGOTS” TOUR
Michael Heath is a “long-time anti-LGBTQ activist in Maine” who is obsessed with homos to the point where you’re forced to wonder why he just doesn’t turn around and look away.

On a recent livestream with some other fag-bashin’ Christian, he said that Donald Trump’s irreverent fearlessness has inspired him to embark upon a “Faggots Are Maggots World Tour”:

I’m going to do a world tour.  The theme is “Faggots are Maggots.”  The tour is inspired by the work of Donald Trump.  This isn’t satire.  I’m serious. I started supporting Donald Trump early in the 2016 primary for one reason.  He insults his enemies.  He makes things personal that deserve to be personal.  The decades of Leftists being the only ones allowed to make everything personal are over.  It’s long past time for WASP manners to take a back seat to the truth.  Long past time….Faggots are … indeed … maggots.  Maggots consume the rancid flesh of rotting dead things.  Faggots are no different…I am beyond sick and tired of being told that I can’t call sodomites faggots.

Heath has yet to announce tour dates, but if there are any investors out there willing to finance a documentary about the whole “Faggots Are Maggots” experience, shoot us an email.

HARMLESS-SOUNDING PHRASES YOU DIDN’T REALIZE ARE STEEPED IN RACISM
A helpful article in the South Tampa version of annoying-community-networking website patch.com warns us not to use “Common Words That Are Actually Racial, Ethnic Slurs.”

You see, it’s not the usual racist words that we all know—the “N” word, the “J” word, um, “wetback” and “Frog” and all those other horrible words—that cause hurt feelings, declining health, social chaos, and, inevitably, every single freaking time, mass violence leading to genocide.

Next time you’re leading a chant of “hip hip hooray” at a coworker’s birthday party you should know that it’s a bastardization of the term “hep hep,” which was “once shouted by German Anti-Semites” and culminated in the Hep Hep Riots of 1819.

Oh, you just told the people in the “peanut gallery” to be quiet? Don’t tell me you were unaware that back in the segregation era, rich theater-goers would often eat peanuts and toss the shells down into the cheap seats—the only ones that poor blacks could afford. So when you tell the peanut gallery to be quiet, it’s no different than shouting, “Shut UP, [N-word]!”

Finally, you may think you’re being cordial when you meet up with an old chum and say, “Long time, no see.” Instead, you’re celebrating Manifest Destiny’s genocide of Native Americans, since in a 1901 book, the Injun character greets a paleface by saying “It’s been a long time since I’ve seen you.”

At this point, it’s safer never to open your mouth. Just let everyone else yell at you, and we’ll all live happily ever after.