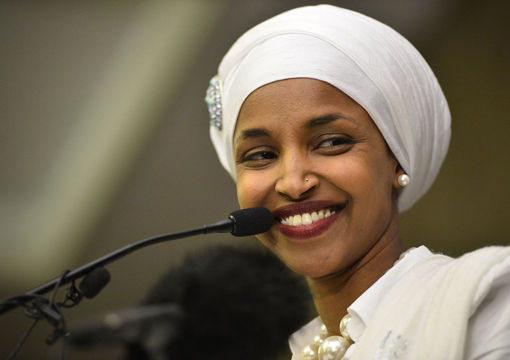 The Week’s Most Reckless, Feckless, and Neckless Headlines

SOMALI TURNCOAT SAYS CONGRESSIONAL ISLAMO-SLUT ILHAN OMAR MARRIED HER OWN “VERY EFFEMINATE” BROTHER
Muslim fame whore Ilhan Omar is a Congressperson from Minnesota who clearly hates America and all it represents because the country’s wealth and resplendence remind her of why she had to flee her Somalian homeland back in the late 1990s.

In 2002 she married some Muslim guy in a Muslim ceremony that was not officially recognized because they didn’t file any legal papers. Then, in 2009, she employed the services of a Christian minister to get hitched to someone named “Ahmed Elmi” who, at first glance, seems extremely gay. This is how Mr. Elmi was able to get his green card.

She divorced Elmi a couple years later and then remarried her original Muslim husband. Then she ditched him last year in favor of a married white guy who helps her raise funds for her political endeavors.

Now cometh forth a certain Abdihakim Osman, a member of Minnesota’s secretive and insular Somali community, claiming that the very swishy Mr. Ahmed Elmi is in fact Omar’s brother and she only married him so he could acquire American citizenship and get financial aid for college, even though he was dumb enough to choose a college in North Dakota.

Through an interpreter, Osman told a reporter:

People began noticing that Ilhan and [her Muslim husband] were often with a very effeminate young guy. He was very feminine in the way he dressed — he would wear light lipstick and pink clothes and very, very, short shorts in the summer. People started whispering about him. [Her Muslim husband] and Ilhan both told me it was Ilhan’s brother….

If this is true, a sitting US Congresswoman has committed the felony of marriage fraud. We’re willing to call it even if she accepts a one-way plane ticket back to Somalia, assuming there are airports there.

A Manhattan jury of seven men and five women found the lumpy pervert mogul guilty of rape and a criminal sex act based on the testimony of two women who admitted that even after he raped them, they continued seeking favors from him, accepting gifts from him, telling him they loved him, and even having sex with him again—which are weird things to do after someone has raped you. One of the two witnesses even introduced him to her mom after she said he raped her.

Jurors were subjected to pictures of Weinstein’s naked body and graphic descriptions of a scar-covered penis and his mysterious lack of a scrotum. It is our legal opinion that it wasn’t the testimony of these two suspected gold-digging fame whores that brought Weinstein down—it was the relentless and inescapable reminders that Harvey Weinstein has a sex drive.

CROATIAN REVELERS GLEEFULLY BURN GIANT EFFIGY OF TWO HOMOS
One thing that’s simply marvelous to behold about Eastern Europeans is the passion, sweat, and pure religious devotion they put into hating fags. It’s as if the Phelps family from the Westboro Baptist Church were so fruitful and multiplied to such a degree that they suddenly occupied half a continent.

“If you can’t ridicule the unfortunate, what’s the point of even having a democracy?”

The tiny fiefdom of Croatia is home to four million homo-hatin’ Slavs. “Hey, how much do they hate them homos, huh?” you might ask, and with good reason. They hate them so much that they only legalized gay sex in 1977, and we’re not even sure why. They have such seething disdain for sodomites that in 2018 they publicly burned an oversized replica of the children’s book My Rainbow Family at a carnival in Kastela.

These fruit-loathing Croatians, four out of five of whom are Catholic, hate turd-burglars so much that at a carnival in the tiny town of Imotski, “while a brass band played and people danced,” they recently burned a giant effigy depicting two men kissing while holding a baby. They did this “to wild cheers and applause.”

According to Milivoj Đuka, who is president of something called the “Bako Ceremony Cultural Society” and likes to pose in front of swastikas on Facebook:

We are a conservative society, and are sticking by tradition. Give a child to a mother, as the saying goes. We think this is the right thing to do.

Croatia’s president says he supports the gays in this struggle. People on both sides called the other side disgusting, and nothing got solved. Nothing ever does.

TWO “WHITE” STUDENTS WHO SAID “N-WORD” BROUGHT UP ON CRIMINAL CHARGES FOR “RIDICULE”
A few months back, two swarthy University of Connecticut students were filmed gleefully saying a word that rhymes with “chigger” as they sashayed across the campus, blissfully unaware they were being filmed.

Even though Jarred Karal and Ryan Mucaj’s surnames are Turkish and Albanian, and even though these bearded gents look as if they’ve milked a few camels in their day, the press insists on referring to them as “white” because it’s common knowledge and a scientific fact that only white people are capable of saying that wretched and frankly sinful word.

Shortly after their little parking-lot escapade, Karal and Mucaj were arrested and charged with a misdemeanor for violating a 1917 Connecticut law that targets anyone who “ridicules or holds up to contempt any person or class of persons, on account of the creed, religion, color, denomination, nationality or race of such person or class of persons.”

That sounds like the least fun law we’ve ever heard of. It’s a total bummer that’s harshing our mellow even as we type this.

This law makes a mockery of the noble war our forefathers fought in 1776 before they turned westward and started exterminating all the Indians. If you can’t ridicule the unfortunate, what’s the point of even having a democracy?

DON’T TRUST WHAT THE SLOPES SAY ABOUT CORONAVIRUS
When people talk dismissively about the “Yellow Peril,” it’s almost as if they’re implying there’s something wrong with mistrusting Asians.

All we know is that it wasn’t the Nazis who bombed Pearl Harbor.

The Chinese people are a race of ruthless, heartless, icy, highly intelligent diminutives who are plotting our destruction by manipulating their currency, infiltrating Hollywood, stealing our technology, getting us addicted to their spicy cuisine, and working their own people ragged until they leap off corporate rooftops in what can only be viewed as “mercy suicides.”

Not to be outdone by themselves, the Chinese have now apparently unleashed a global pandemic which may lead to financial collapse, natural disasters, train wrecks, flooding, street brawls, rampant alcoholism, open-air gulags disguised as quarantine facilities, and countless cases of people suddenly coming down with a case of the sniffles.

Chinese authorities—who are so shady that they won’t even permit officials from the Centers for Disease Control to enter Ground Zero for coronavirus and conduct their own testing—initially said that the outbreak in Wuhan that has now spread to dozens of countries was likely the result of a human eating some weird-ass infected beastie, perhaps a bat or even an armadillo-like scaly creature, they’d purchased at a local “wet market.”

Then, when it was leaked that “China’s only Level 4 microbiology lab that is equipped to handle deadly coronaviruses” is located in Wuhan just a hop, skip, and a jump from that wet market, we started wondering why we were ever so gullible and trusting that we eagerly ate all those egg rolls without first sending them to a lab.

Short people who eat bats are never to be trusted. Neither are people who always seem to be squinting as if they’re afraid to look you straight in the eye—clearly, they have something to hide.

POLL: 80% OF ARTISTS ARE TERRIFIED TO SPEAK THEIR MINDS
In case you were unaware—or, more likely, you were so keenly aware that you decided it was wise to keep your mouth shut decades ago, which is why you still have a job and aren’t homeless or in federal prison—we’re currently trapped in a culture that is so suffocatingly hostile toward dissenting opinions that it makes Pol Pot look like a free-speech absolutist.

There’s something called ArtsProfessional, and even though we never heard of it before, we will assume it has something to do with professional artists. We will also note that combining two words into one word like that is a personal pet peeve. It’sAnnoying.

The organization recently conducted a “Freedom of Expression” survey that asked “500 artists and arts workers” about how they were able to slalom around the modern Cancel Climate while still being able to feed themselves and maintain a sliver of self-esteem.

We’re not sure what their criteria was for determining exactly what an “artist and arts worker” is or isn’t. These days, isn’t everyone a “creative influencer”?

A robust four out of five of these so-called artists agreed with the sentiment that “workers in the arts and cultural sector who share controversial opinions risk being professionally ostracized.” It will be assumed that the fifth respondent was so terrified of the backlash they’d get for agreeing with that statement that they disagreed with it just to protect their own selfish hide.

According to ArtsProfessional Editor Amanda Parker:

Our survey shines a damning light on the coercion, bullying, intimidation and intolerance that is active among a community that thinks of itself as liberal, open-minded, and equitable. We are very aware that this research doesn’t reflect all views, but it’s a sad and timely indication of the suppressed hurt and anger felt by many, despite the loud and growing conversations about collaboration and inclusiveness.

Another respondent blamed white people in one of the rare modern instances where it’s legitimate to blame them:

Our arts, culture, and indeed education sectors are supposed to be fearlessly free-thinking and open to a wide range of challenging views. However, they are now dominated by a monolithic politically correct class (mostly of privileged white middle class people, by the way), who impose their intolerant views across those sectors. This is driving people who disagree away, risks increasing support for the very things this culturally dominant class professes to stand against, and is slowly destroying our society and culture from the inside.

We have very strong feelings about this topic and would like to express them, but you people are crazy, and frankly you scare us. But you should hear what we say about you behind your backs.