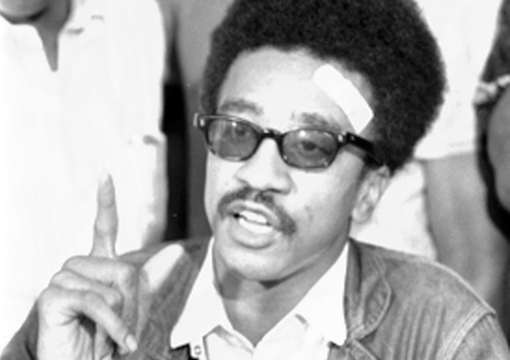 The Week’s Most Unattractive, Hyperactive, and Radioactive Headlines

SUPREME COURT TELLS H. RAP BROWN TO SIT DOWN AND SHUT UP
H. Rap Brown is a light-skinned black man who first gained fame in the 1960s for his heartwarming autobiography Die Nigger Die! and for openly encouraging violence against white America. The man who had famously proclaimed that “violence is as American as cherry pie” told blacks to “organize themselves” and “carry on guerrilla warfare in all the cities.”

In the 1970s, while in prison for a shootout with federal officers, Brown demonstrated that he wasn’t very bright by embracing the religion of the people who originally enslaved African blacks and giving himself the ridiculous name of Jamil Abdullah Al-Amin.

Despite all this, the authorities let him out anyway, and eventually he shot two Georgia police officers, killing one of them. It mattered not a whit(e) that both of the officers were black—Brown insisted he was the victim of a white supremacist government’s conspiracy.

He appealed his life sentence, and his case made it all the way to the US Supreme Court, which last week rejected his appeal and told him—well, we’re reading things into their decision, let’s be honest—that he needs to sit down, stop his incessant yappin’, and realize that if he hadn’t killed a black man, he wouldn’t be where he is right now.

LESBIAN ASTRONAUT FALSELY ACCUSED OF SPACE CRIME
You may not be aware that the United States has experienced so much social progress since that epic moment when Mario Savio bravely stood atop a car’s hood and burned his bra that we now have lesbian astronauts, but we do.

Her name is Anne McClain, and she looks like a lesbian, too, complete with lantern jaw and short-cropped 1980s Ricky Schroder hairdo.

In 2019, McClain made headlines after being framed as perhaps the first person ever to commit a crime from outer space—namely, improperly accessing the bank account of her lesbian wife Summer Worden—an absolute beast of a woman who resembles comic actor Joe E. Ross of “Car 54, Where Are You?” fame.

In her defense, McClain said that she was merely using a login she and Worden had shared while they were married. An FBI investigation proved she was right, and now the tables have turned on the uglier lesbian of the two—Worden has been indicted for “falsely accusing her of committing a crime from space.”

Seeing as how queer themes in science fiction is now a major part of American students’ education, we will be closely monitoring this space-lesbian saga.

HIDEOUSLY UNATTRACTIVE FEMALE WRITER SAYS ROYAL COUPLE IS SHALLOW
This is a picture of Jan Moir. She makes a living writing nasty things about people who are more attractive and famous than she is. One glance is all you need to understand why she’s so bitter and vindictive. We’ve seen manatees with more sex appeal.

In the midst of a worldwide crisis, Moir recently chastised Prince Harry and his multiracial wife for announcing some goofy new charity to which they’re attaching their names:

Yet not even a pandemic can stop Harry and Meghan in their self-imposed, grandiose scheme to save the world, one worthy cause at a time….I mean, who are they trying to fool? The current global health crisis has made many take stock, and to focus with piercing clarity on what is really important; family, health, love and safety.

The most unfathomable mystery of all is simply why they have to continue to present themselves as all-encompassing do-gooders, armed with their grab bag of causes which include climate change, mental health, domestic violence and refugees?

“The European mainstream understands perfectly that supporting immigration will harm Europe, which is precisely why they support it.”

Fine, sure, great, we get it, but we can’t restrain ourselves from pointing out that in the midst of a global pandemic that Jan Moir claims is an opportunity for us all to “take stock” and focus on “family, health, love and safety,” Moir is the one focusing on these moronic non-entities with her bitter opinions rather than doing any good herself.

INDIAN COUPLE NAMES NEWBORN TWINS “CORONA” AND “COVID”
After the Western world has finally come to grips with the embarrassing fact that for literal centuries they had misclassified Native Americans as “Indians,” along comes a couple from India to do something even dumber than the most humble Cherokee could ever imagine.

Vinay and Preeti Verma are the undeservedly proud father and mother of newborn twins whom they decided it was a good idea to name “Corona” and “Covid.” Corona is a girl, while little Covid is a boy.

According to the unfortunate twins’ mother:

The delivery happened after facing several difficulties [due to coronavirus lockdown] and therefore, my husband and I wanted to make the day memorable….With vehicular movement stopped, we both made it to the hospital somehow late at night after a lot of suffering. Since the deliveries happened after such difficulties, we wanted the names to be memorable and unique….Besides, these names are beautiful in their own, with Corona being Latin for crown….Also, we want the fear associated with these names to end and the public to focus on sanitation and hygiene.

Yes, imagine the honor of having people wash their hands every time they hear your name.

FOREST FIRES NEAR CHERNOBYL
Ukraine is a perpetually battered nation that has the world’s scariest drug addicts and craziest boxers. In 1932-33 its citizens endured one of the worst orchestrated famines in world history, and in 1986, while it was still part of the Soviet Union, Ukraine also hosted the worst nuclear accident in history at Chernobyl.

As this doomed nation’s luck would have it, wildfires now encircle the spot of the 1986 nuclear disaster and have caused local radiation levels to spike sixteen times higher than usual.

We wish the Ukrainians well, but we have our own problems and regret to inform them that we can’t help.

TRUMP ADMINISTRATION LABELS “RUSSIAN WHITE SUPREMACIST GROUP AS TERRORIST ORGANIZATION
Despite the fact that Donald Trump has never once addressed white people as a group and has consistently grabbed his ankles to condemn “Nazis” and “racists” and “white supremacists,” his detractors insist that he is a Ginger Hitler who makes shameless appeals to skinheads in broad daylight.

Last Monday, for the first time in US history, the State Department designated a “white supremacist” group as a “Specially Designated Global Terrorist” organization:

Since 2015, the world has seen a surge in white supremacist terrorism.  Last month was the first anniversary of the horrific terrorist attack on two mosques in Christchurch, New Zealand.  The United States is not immune to this threat.  We’ve seen attacks targeting people because of their race or religion in places like Pittsburgh, Poway, and El Paso.

Countering this threat is a top priority for this Administration.  After the El Paso attack, President Trump said, “In one voice, our nation must condemn racism, bigotry, and white supremacy.  These sinister ideologies must be defeated.”

Today, the State Department is designating the Russian Imperial Movement – also known as RIM – as a Specially Designated Global Terrorist, or SDGT.

Neither the SPLC nor BLM have been designated as terrorist organizations, however. Nor has Antifa, despite its endless open calls to violence.

Anyone who voted for Donald Trump believing that he would defend—or at least not openly attack—white political interests has been sold a big stinking brick of Limburger cheese.

AN UNREPENTANT LITTLE OL’ ISLAMOPHOBE FROM KOKOMO
When the Beach Boys recorded their wonderful #1 hit “Kokomo” for the Tom Cruise cinematic classic Cocktail, we are almost certain that it was not some kind of dog whistle encouraging people to bash Muslims.

However, Roger Stewart is an intolerant-looking Kokomo city councilman who refuses to step down after sharing the following horrifying comments from someone else on his private Facebook account:

I refuse to bend, twist or change to make Muslims feel comfortable in MY COUNTRY. They either adhere to our laws or leave! THIS IS MY COUNTRY! Understood???

He also stated that anyone who takes the oath of office on a Koran rather than a Bible is a “traitor” to his nation.

But unlike a former candidate for the prestigious position of Kokomo city councilman who resigned after referring to Muslims as “goat-humpers,” Stewart vows to fight the good fight against the 0.4% of the city’s population who are Muslims.

E.U. SCOLDS MIGRANT-RESISTANT COUNTRIES
The European Court of Justice—which exists to commit injustices against indigenous Europeans—recently condemned Poland, Hungary, and the Czech Republic for refusing to embrace hundreds of thousands of swarthy “refugees” who come to Europe merely for the rape and free cell phones.

We lost but that’s not important. The important thing is we don’t have to pay anything. The fundamental thing is that we will not take in any migrants and that the quotas have since disappeared.

The idea of a quota was unreasonable from the beginning. The European mainstream still have not understood that supporting immigration is not a good answer to Europe’s problems.

We disagree. The European mainstream understands perfectly that supporting immigration will harm Europe, which is precisely why they support it.