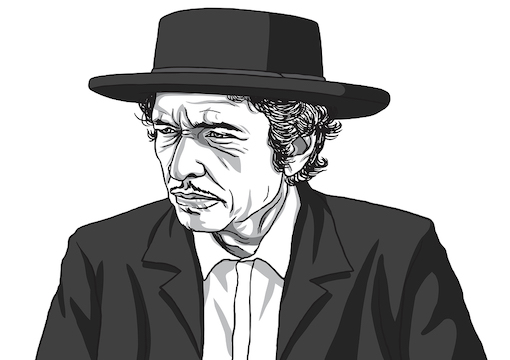 The Week’s Most Captivating, Penetrating, and Nauseating Headlines

DYLAN SCORES FIRST #1 WITH HIS WORST SONG EVER
Bob Dylan was born Robert Allen Zimmerman in northern Minnesota and remained Robert Zimmerman until he realized he could get away with pretending to be a non-ethnic hobo bard from the South if he rechristened himself as “Bob Dylan.” As Southern humorist Roy Blount, Jr., once noted, Dylan is the type who will pronounce it “auty-mobile” and expect no one to notice that he’s faking it.

Dylan can’t sing, can hardly strum a guitar, wheezes through a harmonica as if it’s a ventilator, is as short as the average woman, is rumored to generate intense body odor, looks like a homeless person, and his music blows in the wind.

He’s also the pretentious type who will give his songs inscrutable titles just to confuse people, which is why he titled a song that should have been called “Everybody Must Get Stoned” as “Rainy Day Women #12 and #35” instead. He’s that insufferable.

Despite selling 100 million albums to people who were somehow able to find wisdom in his off-key warblings, Dylan had never lodged a #1 hit in the USA. He hit #2 twice—with “Like a Rolling Stone” in 1965 and the aforementioned “Everybody Must Get Stoned” in 1966.

Now, at a point when he is roughly Methusaleh’s age and when 20-year-olds don’t even know who JFK or Bob Dylan was, Mr. Zimmerman has proved that people in the 2020s may be worse than those in the 1960s because he’s finally scored a #1 hit—with an unlistenable ballad about JFK’s assassination that has more meaningless pop-culture references than an average episode of The Simpsons. Oh—and the thing is 17 minutes long.

It is called “Murder Most Foul,” and the atonal abomination recently hit #1 on Billboard’s Rock Digital Song Sales chart. Without so much as an apology, it includes the following lyrics:

Goodbye, Charlie Goodbye, Uncle Sam Frankly, my Scarlet, I don’t give a damn….
They mutilated his body, and they took out his brain What more could they do?  They piled on the pain But his soul’s not there where it was supposed to be at For the last fifty years they’ve been searchin’ for that….
That magic bullet of yours has gone to my head I’m just a patsy like Patsy Cline…. Play “Mystery Train” for Mr. Mystery The man who fell down dead like a rootless tree Play it for the Reverend Play it for the Pastor Play it for the dog that got no master

Why, it’s almost as if Lee Harvey Oswald shot the wrong guy!

FLORIDA WOMAN ARRESTED FOR STUFFING PORNOGRAPHIC EASTER EGGS IN MAILBOXES
Abril Cestoni says she’s 42 years old, but one peep at her mug shot either suggests she’s lying and is actually 84 or has eaten a pound of meth every day for the past 20 years.

She lives in Florida, where a disproportionate share of the crazy things in America happen mainly because no one is from Florida and usually comes there because they’re fleeing something. It’s much like LA, but with humidity and giant flying cockroaches. If you hear a story about a naked Satanist eating someone’s face at a 7-11 because he couldn’t get refills on his Slurpee, you can bet your last wooden nickel that it happened in Florida.

Cestoni was arrested last Wednesday and booked on 11 counts of Distributing Obscene Material after she admitted to stuffing countless mailboxes with plastic Easter eggs that, among other things, contained hardcore pornography:

In addition to the X-rated content, eggs also contained a random assortment of goodies, including a fish-shaped cracker, toilet paper, a powdered drink mix and religious pamphlets.

“Social media has made people more antisocial than at any previous point in human history.”

BLAMING 5G FOR CORONAVIRUS
If you’ve learned anything from the coronavirus pandemic, you should have at least learned that the world is stuffed to the rafters with know-it-alls who don’t know anything. Despite the fact that even world-class virologists are flustered and befuddled, social media is glutted with people who don’t know a germ from a German but claim full knowledge of what’s happening.

One of the theories to have emerged from the murky morass is the idea that 5G technology may compromise the human immune system and thus might be enabling the spread of the virus. Another theory—or it’s probably best to call all of these ideas hypotheses at this point—is that 5G causes coronavirus infections all by itself.

Both 5G and the virus are so new that we doubt any reliable testing has been done to either support or refute this theory, but that doesn’t stop most people from acting as if it’s already settled science or entirely “debunked.”

On the other hand, that theory hasn’t been proved yet, either. Its adherents have been setting fire to 5G towers throughout the UK and into continental Europe—and even Cyprus.

In February, Donald Trump was reportedly “apopleptic” that Boris Johnson refused his plea to not allow the Chinese firm Huawei to have a hand in Britain’s mobile phone industry. But at the last minute, it turns out the UK might not allow Huawei into the market after China’s mishandling of the pandemic.

Eamonn Holmes is a TV host on a British show called This Morning, but it’s doubtful that anyone in America has heard of him or his show because it’s an established fact that Americans haven’t wasted a thought on England ever since we sent them packing in the late 1700s.

On a recent episode of a show that no one in the United States would watch even if they had the opportunity, Holmes mentioned the 5G theory. Mind you, he didn’t endorse or negate it—he simply mentioned the existence of an idea that is so prevalent, people in England recently torched multiple 5G towers:

What I don’t accept is mainstream media immediately slapping that down as not true when they don’t know it’s not true. No one should attack or damage or do anything like that but it’s very easy to say it is not true because it suits the state narrative. I reserve the right to listen and question

As a result, he was immediately slapped down on social media by people who couldn’t distinguish a computer virus from coronavirus.

Just as happened with Eamonn Holmes in England, perpetually stoned American actor Woody Harrelson was lambasted for allegedly “endorsing” the 5G hypothesis, although just like Holmes, all he did was say that he’d heard about it and found it “interesting.” He even went out of his way to say he “hadn’t fully vetted it.”

Social media has made people more antisocial than at any previous point in human history. Maybe people are beginning to realise this.

CHINA RESUMES SELLING LIVE BATS AND PANGOLINS
Forget the fake Russian conspiracy—anyone with two and a half brain cells to rub together knows that the main reason the press has been so rabidly anti-Trump since 2015 is because he dared to criticize our financial overlords in China.

Whether or not you think the virus that causes COVID-19 leaked from a bioweapons lab or simply leaped from a bat’s anus into the mouth of a woman who was slurping bat soup, hardly anyone disagrees the virus originated in China.

And whether or not they’re lying about the numbers, China is at least claiming to have successfully put the kibosh on the spread of the virus since enacting extreme lockdown measures long before the USA did.

At the moment, recorded COVID-19 deaths in the USA outpace China’s by a factor of ten.

And now comes news that China has reopened those “wet markets” that sell every slithery beast under the sun and are a prime launching pad for zoonotic diseases, i.e., the ones that pass from animals to humans. The only one that has not reopened is the Huanan Seafood Wholesale Market in Wuhan, which was originally fingered as Ground Zero for the outbreak.

According to Dr. Anthony Fauci:

It boggles my mind how, when we have so many diseases that emanate out of that unusual human-animal interface, that we just don’t shut it down. I don’t know what else has to happen to get us to appreciate that.

GEORGIA SUSPENDS 1951 ANTI-KLAN MASK LAW
The great state of Georgia is filled with warm weather, mountain scenery, and black people. Nearly a third of its residents can trace ancestry to the southern half of the Dark Continent, making it the third-blackest state in the country.

And wherever there are blacks in the US South, there will also be the Ku Klux Klan. Or at least that’s the way it used to be. In 1951, the state passed a law against wearing masks in public that was designed specifically to hobble the KKK.

Now they’ve lifted that law in order to enable Georgians to walk around with their faces obscured in the hope that they won’t snort a fatal airborne droplet containing coronavirus. The governor signed an executive order temporarily suspending the 1951 law that made it a misdemeanor to conceal your face while on public property. Even Democratic State Senator Nikema Williams—no need to Google her, her name is “Nikema,”—supports the law.

We have a dream that one day soon down there in Georgia, adult Klansmen and adult black politicians will be able to avoid coughing on one another without fear of criminal prosecution.