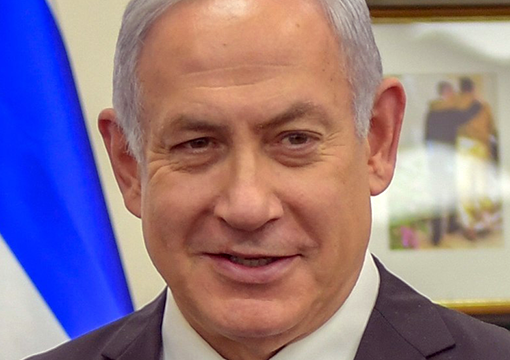 The Week’s Most Jewish, Shrewish, and Newish Headlines

BIG BAD BOUNCIN’ BIBI SEEKS TO IMPLANT ISRAELI SCHOOLCHILDREN WITH SOCIAL-DISTANCING MICROCHIPS
Israeli Prime Minister and leader of the entire world Benjamin Netanyahu is a cad, a scoundrel, a rake, a raconteur, a ne’er-do-well, a double-crosser, a cheeky chappie, and possibly even a roustabout. We don’t trust him as far as we could spit for reasons which should be obvious.

Although we have no doubt that the long con he’s playing involves nuking the entire planet except for Israel, he recently suggested something so weird that we’re starting to think he’s some kind of sexual deviant and possibly even a diddler of small children whom we assume are all circumcised.

In order to enforce “social distancing” via cybernetics, Netanyahu has endorsed implanting Israeli schoolchildren with microchips that would start furiously beeping whenever kids got within six feet of each other:

I spoke with our heads of technology in order to find measures Israel is good at, such as sensors. For instance, every person, every kid – I want it on kids first – would have a sensor that would sound an alarm when you get too close, like the ones on cars.

The ones on cars? That’s right—Israeli police are able to track the movements of all vehicles in their nation; they also store the data for years.

Some “tech experts” complain that such kiddie chips would be dangerous, because some hacker pedo would also be able to track the poor lambs’ movements. But who’s to say there aren’t pedophiles in government? From some of these websites and YouTube videos we’ve seen, everyone in government is a pedophile—they even force you to have sex with children in front of people in Devil masks before making you swear on a Bible that you won’t tell anyone about it.

And even if they aren’t pedophiles, who wants to live in a world where children can’t even play within two meters of one another without alarms going off? It’s like a bad Stephen King novel, which, if you’d ever read a Stephen King novel, you’d realize is a redundancy.

What’s undeniable and irrefutable and will never be debunked nor discredited is the fact that anyone who wishes to build a nation of beeping Jewish schoolchildren is an anti-Semite of the worst order. What do you have to say for yourself, Benji?

SAN ANTONIO CLASSIFIES THE TERM “CHINESE VIRUS” AS “HATE SPEECH”
Referring to SARS-CoV-2 as the “Chinese virus” is hate speech that will lead to an inevitable rise in anti-Semitism—or so San Antonio Mayor Ron Nirenberg would have you believe.

Citing an alleged uptick in “hate” and “speech” and “evil” and “words” and “meanness” since the beginning of the COVID-19 crisis, Mayor Nirenberg put forth a resolution before the City Council urging citizens to “report any such antisemitic, [sic] discriminatory or racist incidents to the proper authorities for investigation.” And the snitch-happy suckers passed the resolution by a vote of 11-0.

Sure, we’ve all heard that the various slopes and slants who’ve come here from a continent of dog-eaters and bat-chewers for a better life have experienced an uptick in chopsticks jokes and “me make pee-pee in your Coke” taunts ever since it was revealed that this latest novel coronavirus originated in China. And because many of our politicians are essentially slave laborers on China’s behalf, they will pretend it’s about racism and hatred and evil white people rather than calling a Chinese virus a Chinese virus.

But what does the Chinese virus have to do with anti-Semitism? Are there even any Jews in Texas? We haven’t a clue. You’ll have to ask Mayor Nirenberg.

WHAT PLANDEMIC? THERE’S NO PLANDEMIC
Because it is the duty of tech behemoths such as Twitter and Facebook to protect the public rather than rake in billions by colluding with the federal government to help carefully sculpt a narrative that must not be questioned or undermined under penalty of death, they’ve recently performed a tag-team curb-stomping of a 26-minute “Plandemic Movie.” You can no longer find a trace of it on YouTube, Twitter, Facebook, or Vimeo. Twitter even banned hashtags announcing that the film had been banned. We haven’t seen the movie, but it apparently garnered over a million views before our caregivers decided we might use the information detailed therein to harm ourselves, and the last thing Mark Zuckerberg or Jack Dorsey or Vinny Vimeo want to see is any of us harming ourselves. Apparently the movie alleges that face masks can make you sick and that the entire “crisis” was merely a scheme to create a false panic and reap billions or even trillions by heroically rolling out a new vaccine. We are not scientists and therefore cannot verify nor deny such claims, especially when we haven’t even been permitted to see exactly how the claims were being made and what evidence the filmmaker cited, so we will instead have to rely on the wisdom of writers at such prestigious medical institutions as the New York Post to keep us safe, swaddled, and sucking on warm milk from baby bottle’s soothing rubber nipple.

JERSEY STATE TROOPER AMBUSHED AND SHOT BY TRAILER-PARK MOB
It’s getting to the point where a white man can’t even go out for a jog without getting shot. When 29-year-old New Jersey police detective arrived at a mobile-home park to investigate an incident from earlier in the day in which five women allegedly invaded another woman’s home, assaulted her, and—this is where it gets rough—stole her iPhone, he was greeted by a “caravan” of five cars containing 14 weapons-totin’ people who had allegedly showed up to finish whatever “job” the other five women had started earlier that day. When Detective Richard Hershey informed the “mob” of evildoers that he was a police officer, three separate men fired at him, with one bullet injuring his leg. Hershey returned fire, wounding one of the men—who, if you want to be frank, was of a hue closer to a Hershey’s bar than Hershey is—in the leg.

“Is it worse to be a serial killer, or merely to be French?”

Among the 18 arrestees were people with imaginative parents who gave them colorful names such as Najzeir, Tremaine, Kareen, Jazmin, Yomari, Iramari, Shakeem, Markese, Aisha, Rovell, Jenislen, and Chavana. The original female victim had already suffered a broken rib and lacerated lung in the initial attack, but apparently this didn’t sate an endless appetite for human suffering among Nazjzeir and the rest of the motley crew.

LOUISIANA COP ACCUSED OF EXCHANGING SEX FOR SPEEDING-TICKET LENIENCY
Life sometimes presents us with uncomfortably complicated moral dilemmas. Yes, we realize that reckless driving kills tens of thousands of Americans every year—far more than “hate” ever kills. But if we were such control freaks that we decided we wanted to be cops, would we occasionally take sexual liberties with attractive women in exchange for tearing up that speeding ticket we were going to write them?

How dare you even ask such a question?

Darwin Fontenot—yes, his parents named him “Darwin”—is a black Louisiana police officer who is but a wee cup o’ broth at 21 years of age. The gentle lawman only graduated from Police Academy last November. But now he finds himself in a bit of a pickle—a woman has alleged that he told her he would not issue her a speeding ticket if she agreed to have sex with him.

Fontenot insists the sex was consensual and that it occurred off-duty. Even so, it must have been pretty bad sex if the woman felt compelled to file a complaint. The disgraced dusky lawman is now facing charges of malfeasance and third-degree rape—a term not used to rate the specific quality of the rape, but that instead refers to when someone in a position of authority takes liberties with someone in custody.

FRENCH SERIAL-KILLER “EXPERT” HAS BEEN FAKING IT ALL ALONG
Is it worse to be a serial killer, or merely to be French? Nous ne savons pas avec certitude, but what we know beyond any doubt is that either option is better than being a shameless fabulist.

Some guy who calls himself Stéphane Bourgoin has for decades posed as an expert on serial killers—ever since 1976, when someone chopped his wife Eileen to pieces in Los Angeles. He went on to receive training at the FBI’s profiling school in Virginia. He interviewed 77 murderers, including big-leaguers such as Manson and Bundy. When French police, Scotland Yard, or the FBI had trouble locating a killer, they came to Bourgoin for help.

Everything in that last paragraph except for the “posed as an expert” part was untrue. There was no murdered wife, no FBI training, no sitdown with Manson, and no police agencies seeking his opinions.

Despite the fact that Burgoin was interviewed endlessly on TV, gave lectures where people paid to hear his “expert” opinion, and published books, not a single Frenchman or Frogwoman bothered to vet any of his claims.

A broken and beaten Burgoin bleated thusly to Paris Match:

I have reached the moment of coming clean. My lies have weighed me down. Sometimes I make films in my head. I have always wanted people to like me….I am ashamed by what I have done and on top of that it was ridiculous.

The only true and poetic justice in this case would be for people to start falsely accusing him of being a serial killer.

A MINOR VICTORY FOR LITTLE ENGLISH GIRLS WHO KNOW THAT THEY’RE GIRLS
One tiny girl in one tiny part of Great Britain may have just struck a major blow against the Tranny Orthodoxy that threatens to drive all of that nation’s children insane.

It’s a tiny win, but with the world headed off a cliff, we’ll take what we can get.