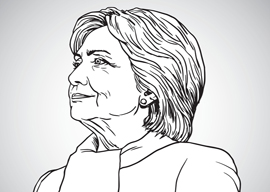 The Week’s Most Uxurious, Notorious, and Vainglorious Headlines

IS HILLARY CLINTON PLOTTING A HOMICIDAL LEFTIST TAKEOVER?
Although we cannot verify it, we suspect that Hillary Clinton may be responsible for more murders than any other human being alive. Not only are we certain that as Secretary of State, her decisions led to hundreds of gallons of bloodshed, but we also wouldn’t put it past her to have personally strangled a dozen or so people to death.

This is why we are so alarmed to learn that Clinton seems to be encouraging her legions of misfit communist street thugs to keep smashing windows and roundhouse-kicking pro-lifers and peeing on cops and setting dumpster fires.

Hillary Clinton says she wants us to believe women when they lodge sexual-assault allegations against men unless they’re one of those women who’ve accused her husband of molesting or raping them.

Apparently deep in the throes of dementia, she is under the impression that right-wingers are the ones who’ve lost all sense of moderation and decorum. In order to fight this imaginary wave of right-wing mayhem, she says her serial cheater of a husband told her that “Democrats have to be tougher.” Hillary elaborated on this basic premise that her accused rapist of a hubby had elucidated:

You cannot be civil with a political party that wants to destroy what you stand for, what you care about. That’s why I believe, if we are fortunate enough to win back the House and or the Senate, that’s when civility can start again… When you’re dealing with an ideological party that is driven by the lust for power, that is funded by corporate interests who want a government that does its bidding, you can be civil but you can’t overcome what they intend to do unless you win elections.

Sounds to us like she wants to fight in the streets. Sounds like she isn’t afraid to get her pantsuits dirty. Sounds like she wants war. But like most of her bellicose-yet-yellowbellied ilk, she’d be knocked unconscious by a light breeze. True to Leftist form, she is privately not only civil but cozy with the “deplorables” she publicly castigates.

ANTIFA DIRECTS TRAFFIC IN PORTLAND
As everyone knows, Portland, OR is an overwhelmingly white city where white people disparagingly call other white people “white” without the merest hint of irony or self-awareness.

Apparently the city elders—all of whom seem to be young gay white men with bow ties and flowers in their beards—allowed anarchists to occupy downtown all summer in protest of ICE, filling the streets with their feces and empty thoughts.

Last week there emerged video of Antifa members in downtown Portland blocking traffic in order to accuse hapless, innocent drivers of blocking traffic. A white man calls a white man in a vehicle a “little white fucker” before the mob realizes the man’s car has a North Carolina license plate, at which point the same white man tells the white man in the car that “We don’t need your KKK in Portland Oregon!”

“Although we cannot verify it, we suspect that Hillary Clinton may be responsible for more murders than any other human being alive.”

That’s really nice except for the fact that Oregon was effectively founded by the KKK until at some point they dropped the compass and were led astray.

But if you’re a white person who seeks to be murdered by another white person for being white, your safest bet is the Rose City.

A THIRD GENDER GOMES TO THE BIG APPLE
New York Mayor Bill de Blasio achieved his lofty position because people were impressed that he was able to cure a black lesbian and have babies with her.

Obviously gunning for the presidency, last week de Blasio signed a bill allowing New York weirdos to select a “nonbinary” gender identity on their birth certificates. The City Council, silly little fools that they are, had passed the bill by a 41-6 vote last month.

“New Yorkers should be free to tell their government who they are — not the other way around,” de Blasio announced as he permitted people to deny the gender that Mother Nature, in her searing vaginal wisdom, had given them.

OK, then we’re all black lesbians, Bill. But this time around, curing us won’t be quite so easy.

BLACK WOMEN ARE THE BETTE MIDLERS OF THE WORLD
Bette Midler is a fat, bagel-gobbling chanteuse with a gigantic honker who was beloved by gay men in the 1970s before they all died of AIDS.

Last Thursday night, still fuming at the fact that Brett Kavanaugh will be a Supreme Court Justice despite the fact that Midler thinks he’s the sort of WASPy serial rapist who had haunted her dreams/fantasies ever since her first menses, Midler unwittingly stepped in a big steaming pile of race hatred by tweeting thusly:

“Women, are the n-word of the world.” Raped, beaten, enslaved, married off, worked like dumb animals; denied education and inheritance; enduring the pain and danger of childbirth and life IN SILENCE for THOUSANDS of years They are the most disrespected creatures on earth.

Really? More disrespected than cockroaches? When was the last time you saw someone invent an aerosol spray that killed women?

Midler was, for those unfortunate enough to be aware of John Lennon and Yoko Ono, referencing a phrase that Ono had allegedly coined in the late 1960s and that became a 1972 song she co-wrote with her emasculated-but-nasty husband called “Woman is the Nigger of the World.”

To our knowledge, Midler was not insinuating that women commit crime at disproportionately high rates, nor that they have low IQs, nor even that they talk funny and sometimes smell like chicken soup when you’re standing next to them on public transportation.

Instead, she was saying they have it as bad as The Blacks. And even though she went out of her way not to say “nigger,” that is all her detractors heard. Sometimes it seems as if they want to hear it.

The backlash, as backlashes are wont to be these days, was hyperbolic, sadistic, and infantile.

In the Huffington Post, a black lady—who, according to Bette Midler, is the N-word of the world—accused her of erasing the experiences of “black women while using the history of black pain and the awful legacy of the N-word as props.” Then the black lady said that “Black women are the nigger of the women who are the nigger of the world,” which is really deep and confusing when you think about it.

Facing wrathful hordes of black women, Midler swiftly apologized, claiming she hadn’t realized that her “choice of words would be enraging to black women who doubly suffer, both by being women and by being black.”

We can agree that black women suffer doubly for being women and for being black, but probably not for the same reasons that Midler does.

GOP OFFICIAL SLAMS “RADICAL SOCIALIST KICK BOXING LESBIAN INDIAN” OPPONENT
In the demimonde of political celebrity, Michael Kalny is but a baby guppy in a shallow pond—until very recently, he served as a GOP precinct committeeman in Shawnee, KS. And even though he had to resign because of some insensitive things he wrote, he is still our favorite political figure of the week.

Sharice Davids is the shovel-faced Democratic candidate for Congress in the 3rd Congressional district of Kansas. Apart from having a face that would make flowers wilt, she is a former MMA fighter and a member of the Ho Chunk Nation, which, contrary to popular scuttlebutt, is not a coalition of obese prostitutes but rather an obscure Injun tribe mostly based in Wisconsin. If elected, she will be the first congress-squaw in US history and also the first gay Kansan to slip past the homophobes and into Congress.

This scenario apparently does not sit well with Michael Kalny, who sent a female Democrat the following message:

His resolve didn’t last long, though, as Kalny eventually caved and resigned his rinky-dink position.

Now Shepard’s gay corpse will join other luminaries as Woodrow Wilson and Helen Keller by being interred at the National Cathedral in Washington, DC.

Ever since Shepard’s 1998 murder in Laramie, WY, his legacy has become sanctified to a nigh untouchable level. We are led to believe that two homophobic Wyoming rednecks met Shepard at a bar, then lured him to the outskirts of town, where they cracked his skull by pistol-whipping him and then tied him to a fence and set him on fire. We are also led to believe—in fact, we are forbidden from believing anything else, lest we be called naughty names—that the sole reason these rednecks bashed this angelic little 5’2” gay man was because he was gay, and all Wyoming rednecks are secretly gay, which is why they take out their self-loathing by bashing in gay men’s skulls with pistols.

Alas, just as with MLK and Nelson Mandela, any time someone is depicted as saintly, you can breathe easy knowing it’s a steamin’ crock o’ shit.

ABC News will tell you that Matthew was “no different than any other young man that age.”

“The view was that homophobic rednecks walked into a bar and saw an obviously gay man with money and targeted him and beat him to death for that reason,” says Stephen Jimenez, author of The Book of Matt: Hidden Truths about the Murder of Matthew Shepard. “But that isn’t what happened. [Killer] Aaron McKinney and Matthew had a friendship. They’d been involved sexually, they bought and sold drugs from each other. That complicates the original story of two strangers walking into a bar and targeting Matthew—someone they did not know—because he was gay.”

Jimenez, who is himself as unabashedly gay as a sprig of mistletoe on a red-velvet winter’s vest, spent thirteen years researching the case and says he originally arrived in Laramie convinced that it was a homophobic hate crime. But after interviewing 100 individuals close to the case, he suggests that the murder may have instead been the result of McKinney’s five-day meth binge and an intent to rob Shepard of a $10K meth shipment that was coming into Laramie.

I believe to this day that McKinney and Henderson were trying to find Matthew’s house so they could steal his drugs. It was fairly well known in the Laramie community that McKinney wouldn’t be one that was striking out of a sense of homophobia. Some of the officers I worked with had caught him in a sexual act with another man, so it didn’t fit – none of that made any sense.

Shepard’s sexual preference … certainly wasn’t the motive in the homicide. What it came down to really is drugs and money.

Even the story that Shepard was tied to a fence as if he were crucified is a lie, despite the fact that nearly every major media outlet who reported on his upcoming interment at the National Cathedral repeated it unquestioningly. According to the lead detective on the case, Shepard was found sitting on the ground with his hands tied behind his back.

As much as it pains us to say it, the gay community really needs better hate-crime victims. It’s not that we want anything bad to happen, but from a public-relations standpoint, it would certainly help their image, and we all know how image-conscious those rump-wranglers can be.