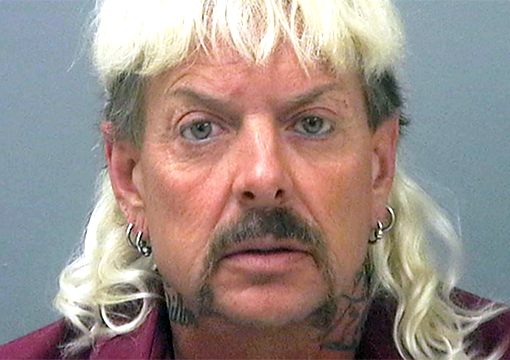 The Week’s Most Addictive, Restrictive, and Vindictive Headlines

GAY TIGER-KILLER LOSES HIS ZOO
As the World’s Only Superpower burns to the ground over the provably mistaken belief that white cops are the biggest danger to black males, we pause to cover a completely wacky and unrelated story before diving into the endlessly depressing live-action unspooling of the United States of America. This story, and this story alone this week, will have nothing to do with the ongoing riots.

The methed-out-looking guy with the frosted mullet and 70s-porn-star mustache you see in the picture there was born Joseph Allen Schriebvogel on a humble Kansas farm in 1963. Five years later, he was raped by an older boy, which may or may not have set him on a path toward lifelong homosexuality; all we’re saying is that it is a little weird that so many adult homos claim to have been molested or raped by older members of the same sex while they were children—last we checked, rates of self-reported same-sex molestation among adult gays were twenty times higher than those reported by people who turned out to be perfectly healthy and normal grownups. What’s even more interesting than this statistical disparity is that you’re not even allowed to mention it, or mobs of gays—who are so joyless at this point, they really should be referred to as “angries” rather than “gays”—will burn down your house with rainbow-colored flamethrowers.

Due to the fact that he married another dude, Schriebvogel’s legal name is now Joseph Allen Maldonado-Passage, but most people know him as Joe Exotic, and boy, is he a character! His first known gay partner died of AIDS in 2001. Another gay partner of his held a gun to his head, claimed that Joe also threatened to kill him, and ultimately wound up going to prison for murder and child molestation. Another gay partner of Joe’s was murdered by someone else on Joe’s property. Joe is a one-time police chief of Eastvale, TX who claims he attempted suicide by crashing his police car into a bridge after his parents outed him as a peter-puffer. He is an aspiring country-and-western artist who allegedly pays other people to record music and then, without telling them, stars in the videos as if he was actually the singer.

Since the late 1990s, Joe has managed the Greater Wynnewood Exotic Animal Park in Oklahoma, which has gained global notoriety for its collection of giant cats.

And, since the exotic-animal-park industry appears to be highly competitive, Joe has been involved in a life-or-death struggle with Carole Baskin, who owns a Florida animal sanctuary called Big Cat Rescue, for nigh on a decade. In 2011, Baskin first locked horns with Exotic when she protested his use of tiger cubs in public presentations. In retaliation, Joe lifted her “Big Cat Rescue” brand name and slapped it all over several of his products, leading her to successfully sue him.

In the late 1990s, Baskin’s husband had gone missing; he was formally declared dead in 2002. People magazine ran a story about speculation that Baskin had murdered her husband. It’s a scab that Joe Exotic has been picking since their feud erupted—he even recorded a country video called “Here Kitty Kitty” that depicts a super-plump Baskin feeding her dead husband’s flesh to a caged lion as Joe looks on disapprovingly in a cowboy hat and priest’s collar. That boy is fierce!

Problem is, in 2018 he was popped on federal felony charges for killing five tigers and for attempting to hire hitmen to kill Carole Baskin. Joe Exotic is currently serving a 22-year sentence. His ongoing feud with Baskin was chronicled in the Netflix series Tiger King: Murder, Mayhem, and Madness.

Last week a federal judge appeared to hammer the final nail in this highly entertaining feud’s coffin, awarding Joe’s zoo to Baskin. Now Ms. Baskin has two big-cat sanctuaries and he’s in a cage. The only way that Joe could possibly win now is to escape from prison and personally murder Baskin—not that we’re encouraging such actions, because they would clearly be illegal. But knowing the level of Joe Exotic’s vindictiveness, we wouldn’t put it past him. Sitting there in his cell, he has nothing to do but plot his revenge.

TRUMP PROMISES TO DESIGNATE ANTIFA AS A TERRORIST ORGANIZATION
Remember when Donald Trump promised to build a wall? To reduce the deficit? To fight censorship? To reduce immigration? To stay out of wars in the Middle East?

You may have heard of Antifa—the current Attorney General of Minnesota, which is Ground Zero for this recent Mega-Riot—is a big supporter of them.

“It is hard for us to muster much emotion about New York Mayor Bill de Blasio, as he has always left us feeling de Blasé.”

In a prepared statement for the cameras, US Attorney General Bill Barr explained why Antifa deserves the designation:

[T]he voices of peaceful protest are being hijacked by radical elements….Groups of outside radicals and agitators are exploiting the situation to pursue their own separate and violent agenda….In many places it appears the violence is planned, organized and driven by anarchic and far-left extremist groups using antifa-like tactics….It is a federal crime to cross state lines or use interstate facilities to incite or participate in violent rioting and we will enforce those laws.

TEARING DOWN CONFEDERATE STATUES TO KEEP THE BLACKS HAPPY
Are you getting the sense that black Americans are incapable of being happy unless they’re destroying something?

Randall Woodfin, mayor of Birmingham, AL, is a sharp-dressing black millennial who says he enjoys listening to rap and hip-hop at extremely loud volumes. Last week workers in his city removed a 50-foot obelisk called the Confederate Soldiers and Sailors monument to appease the rampaging riotards who were setting his once-fair city ablaze.

Woodfin appeared on the TODAY show to justify his decision by invoking the heckler’s veto:

I chose my city to avoid more civil unrest…it’s probably better for this city to pay this civil fine than to have more civil unrest. It’s important to note that the city of Birmingham wasn’t even a city during the Civil War. We don’t have time to worry about something that’s not working for our city and relegates black people to property and slavery. It’s important that we take this down and move forward.

In Richmond, VA—once thought of warmly as the “Capital of the Confederacy”—Mayor Levar Stoney has announced plans to remove statues in honor of Stonewall Jackson, Jefferson Davis, and J.E.B. Stuart along that city’s Monument Avenue. Mayor Stoney says that he realizes these statues may have had cultural significance a long, long time ago:

But times have changed, and removing these statues will allow the healing process to begin for so many Black Richmonders and Virginians. Richmond is no longer the Capital of the Confederacy – it is filled with diversity and love for all – and we need to demonstrate that.

Since it is on state property, Stoney is powerless to remove a monument to Robert E. Lee in Richmond. But fret not—Virginia Governor Ralph Northam is taking care of it. You may remember Ralph from his recent blackface scandal.

POLICE KNEEL IN FRONT OF RIOTERS, EXPECTING MERCY
With rioters burning down every major American city and this time focusing on centers of wealth rather than their own dilapidated ‘hoods, you’d expect the police to charge in and do what police are supposed to do—crack heads until everyone calms down.

That’s why it beggars belief to see that police across the country—not all police across the country, mind you, we’re not that far gone yet, at least not so far this week—are not only standing down and refusing to intervene while literally billions of dollars of human achievement are turned into ashes, but some of these goofballs are actually kneeling in supplication before the rioters who seek to not only destroy their lives but also the very institution of policing.

Mind you, Derek Chauvin had been arrested and charged with murder before most of the rioting started. And that didn’t stop the rioters. Standing back and blithely lettin’ ’em just riot didn’t stop them, either. If they think that getting their knees will spare them, they might as well do the right thing and start sucking, too.

TRYING TO GET RID OF DE BLASIO
It is hard for us to muster much emotion about New York Mayor Bill de Blasio, as he has always left us feeling de Blasé.

He recently tried running for president and received something in the order of three votes.

Whereas about a week ago de Blasio was defending the driver of a police vehicle who plowed through another crowd of those peaceful protesters that wander into traffic and start attacking cars, he did an abrupt turnaround after his hideous and possibly insane mulatto daughter Chiara was arrested for some kind of Black Lives Matter street shenanigans.

Now, as he lets his giant city burn, de Blasio’s opponents have revived a petition to have him impeached. Over 85,000 people have signed the petition, which reads in part:

Mayor Bill de Blasio is destroying New York City. We cannot have him continue as mayor for the next two years. The people of NY want change, and now is the time to act before it becomes any worse. This is not about being conservative, left, etc. This is about radical politics that are harming the city and being neglectful of New Yorkers.

As sweet as the gesture is, the point is moot—de Blasio’s second term ends next year and it is legally impossible at this point to impeach him.

PEACEFUL PROTESTERS PULL UP IN A ROLLS-ROYCE TO LOOT
As peaceful protesters continue to fight injustice on the racist streets of these here United States, they must also fight rampant cultural stereotypes. You know what we’re talking about—the stereotype that every urban looter is a drooling troglodyte who lives with sixteen cousins and forty thousand cockroaches in a two-room urban project apartment. Such stereotypes are damaging because not only do they harm the self-esteem of young aspirant looters, they are also factually inaccurate.

To help fight such toxic tropes, some enterprising young urban looters arrived late one night last week at “an upscale retail store in Manhattan” in a Rolls-Royce Cullinan, a model which sells for up to a half-million dollars new.

Perhaps we’ll need to endure a few more decades of young black billionaires in Rolls-Royces looting upscale Manhattan retail stores before we will ever come close to achieving racial justice in this dying, bleeding country.