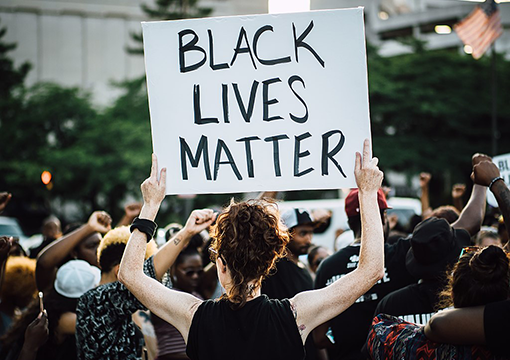 The Week’s Most Obsessive, Transgressive, and Depressive Headlines

WEARING BLACKFACE TO SUPPORT BLACK LIVES MATTER
What’s been made very clear over the past month is that Black Lives Matter but reality doesn’t.

Cities are burning because people have swallowed the provably false notion that cops are targeting black people for their skin color rather than their criminality and tendency to resist arrest.

Lunatics worldwide are being encouraged to simply make things up, while anyone who points out facts is being demonized.

A delicious example of this mass unspooling into Brave New Worlds that only exist in people’s minds, certain social-media “influencers”—do you hate that term as much as we do?—are wearing blackface to express “solidarity” with Black Lives Matter.

Yes, that’s right—a segment of the “woke” crowd are in such a deep mental coma that they don’t realize blackface is considered racist and mean and appropriative and evil and murder-worthy.

Comments by the naïve blackface-wearers include:

I wish I was black, today more than ever. Sending my love and full support to the people who demand equality and justice for all races anywhere in the world.

Racist people are the true black heart ones. They are black on the inside, though they do not know it.

OK, hold your horses there, Parson Brown—having a “black” heart means you’re a racist? So the only truly black people are white racists?

We have clearly entered a world of nonreality.

NON-SLAVEHOLDING STATE SUPPORTS REPARATIONS FOR SLAVERY
Even though at the peak of slavery in the United States around 1860, only about 1.5% of whites owned slaves, that doesn’t stop the fanatics from trying to guilt-trip and extort every last living white person 160 years after the fact.

When California became a state in 1850, it was clearly admitted as a free-labor, non-slaveholding state.

Even today, despite their propensity for rioting, California blacks only account for 5.5% of the entire state’s population. That’s 236% lower than the entire nation’s quotient of black people. Still, California is deeper in the throes of the Progressive Delusion than most other states, so the California Assembly voted last week to launch a task force whose mission will be to determine exactly how to extort money from people who were never slaveowners and give it to people who were never slaves.

“What’s been made very clear over the past month is that Black Lives Matter but reality doesn’t.”

Shirley Weber, an extremely obese and uncomely black San Diego member of some black-supremacist group called the Legislative Black Caucus, wrote the bill. In between bites of pork cracklin’s, she ululated thusly:

The discriminatory practices of the past echo into the everyday lives of today’s Californians….We seem to recognize that justice requires that those who have been treated unjustly need the means to make themselves whole again.

Make themselves whole again? When were they ever whole? If you actually dug into the etymology of the word “reparations,” it means to “repair”—in other words, to reestablish the conditions that existed before the alleged damage happened. And as we’ve already established years ago, the only way to turn back the clock and reset it so that blacks are in the same position that they were before competing tribesmen kidnapped them and sold them into slavery would be to reduce their life expectancy by decades and cut their average income to about $1,500 per year.

WHITE PEOPLE IN SEATTLE “AUTONOMOUS ZONE” BULLIED INTO GIVING NONWHITES THEIR LUNCH MONEY
Have you ever noticed that it’s the places with the fewest blacks where white people get the most outraged at alleged anti-black “racism”? By contrast, whites in the South—which always has had far more blacks than anywhere else in the USA—seem to have quite a different take on this whole “racism” narrative.

Up in Seattle—which according to the 2010 Census was only 7.9% black, which actually represents a 2.2% DROP since 1990—gullible white idiots and rifle-toting blacks have established some sort of half-assed “autonomous zone” which, despite its name, keeps depending on outsiders for food and everything else.

A recent video filmed within this “autonomous zone” shows a burly ponytailed male whom we’ll assume is “Native American” whether he likes it or not lecturing the huddled moronic masses about how every white person in the crowd needs to give $10 to an “African American person” before leaving:

I want you to find by the time you leave this autonomous zone, I want you to…give $10 to one African American person from this autonomous zone….If you have a hard time giving $10, you got to think are you really down with this struggle, are you really down with the movement. If that is a challenge for you, I’m not sure you are in the right place…. The white people … I see you, I see every single one of you and I remember your faces.

Wait just a cotton-pickin’ minute there, Geronimo—I thought race was a “social construct” and that “white people” didn’t exist. But here you are, claiming you can spot one merely by looking at their face.

Of course it’s a contradiction. Their entire narrative is based on lies and contradictions. For them, “white” people don’t exist if you’re saying anything good about them or even saying they have a right to exist. But the moment you can punish one, suddenly they are undeniably white.

MACRON: “RACISM” MUST GO, BUT STATUES WILL STAY
French President Emmanuel Macron is most famous for having a wife who is a quarter-century older than him and probably hasn’t been able to lubricate since the 1990s.

To his credit, though, he’s at least showing more grit than any American politician we can think of in the sense that he opposes, at least verbally, the violent tearing down of historical statues based on the delusion that the only thing white males did in the past was oppress other people. Last week he promised to take a stance against “racism”—a word that everyone seems to use but that no one can properly define—but also vowed to let the “colonial” statues stand: “the republic will not erase any trace, or any name, from its history … it will not take down any statue.”

Good for you, you effeminate little Frog who enjoys banging senior citizens.

GOOGLE STARTS DEMONETIZING SITES FOR “HATEFUL” COMMENTS SECTIONS
Google has begun punishing “far-right” websites not only for their articles, but for whatever commenters say under the articles—which is almost impossible to police twenty-four hours a day.

ZeroHedge is one of the best-written and most well-researched sites on the web. It focuses mostly on financial issues but isn’t afraid of getting its hands dirty with other topics.

But now, using “research” and “data” and “information”—i.e., the hysterical, defamatory, and fact-free hysteria of black-power groups—shat out by biased orgs with goofy names such as “Color of Change” and “Center for Countering Digital Hate,” Google has decided to demonetize ZeroHedge because someone in their comments section said something unspecified that these clown organizations deemed to be hateful. Naturally, these Moron Groups allege, with no evidence, that sooner or later if someone states a fact that they find uncomfortable, some poor person of color will inevitably be put in “harm’s way.”

Vanity Fair, in an article applauding Google’s biased censoriousness, falsely labeled the Proud Boys as as “white supremacist organization.” It also alleged that “white supremacists” were behind the nationwide rioting of the last few weeks and added that there is a “clear lack of evidence” that Antifa has anything to do with the nationwide looting and destruction.

Anyone that detached from reality might do better on another planet.

SUPREME COURT SUPPORTS MEN’S RIGHT TO LIE ABOUT THEIR GENDER
In a blow to Donald Trump, the US Supreme Court recently ruled 6-3 that the 1964 Civil Rights Act’s condemnation of discrimination based on “sex” also embraces men who claim they’re women:

An employer who fires an individual for being homosexual or transgender fires that person for traits or actions it would not have questioned in members of a different sex. Sex plays a necessary and undisguisable role in the decision, exactly what Title VII forbids.

That was written for the majority decision by Neil Gorsuch—a Trump appointee.

Brett Kavanaugh—the other Trump appointee—dissented but felt the need to add that the decision represented an “important victory achieved today by gay and lesbian Americans.”

No one should be fearful of losing their job because of who they are, who they love, or how they identify…unless we call them a Nazi.

Get out of this country while you still can.