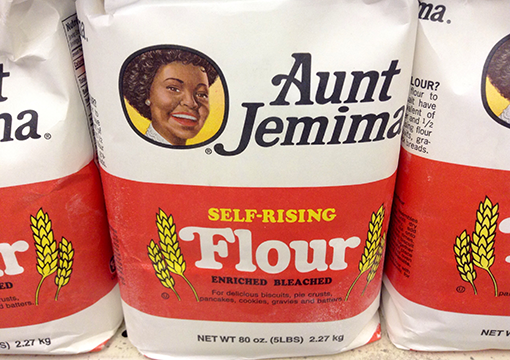 The Week’s Most Inelegant, Irrelevant, and Unintelligent Headlines

DID GEORGE FLOYD KILL AUNT JEMIMA?
Goodbye, Aunt Jemima—you were one of the good ones.

They sacrificed you on the altar of George Floyd, who was one of the bad ones.

Many white people who have never met a black person in their life has at least experienced the joy of seeing Aunt Jemima’s beaming face as they poured golden maple syrup over their flapjacks on a cold winter’s morn and took comfort at the smiling black lady who approved of their gustatory indulgences because life is short and we need all the happy memories we can get.

But she is now gone—brutally butchered to appease the bloodthirsty hordes who suck all the joy out of modern life.

After 130 years of bringin’ that sweet fat black lady to your breakfast table, the Quaker Oats company announced last week that it would be killing Aunt Jemima. They didn’t admit that they sacrificed her chubby body in the hopes that it would sate the crowd’s bloodlust and therefore spare their own lives, but they might as well have:

We recognize Aunt Jemima’s origins are based on a racial stereotype….As we work to make progress toward racial equality through several initiatives, we also must take a hard look at our portfolio of brands and ensure they reflect our values and meet our consumers’ expectations.

It’s an image that hearkens back to the antebellum plantation. … Aunt Jemima is that kind of stereotype that is premised on this idea of Black inferiority and otherness. It is urgent to expunge our public spaces of a lot of these symbols that for some people are triggering and represent terror and abuse.

Mere hours after Aunt Jemima was pronounced dead, Mars Inc.—which owns Uncle Ben’s rice, another heartwarming portrayal of a nice, clean African American person who only wants you to have a good meal—said that Uncle Ben would be the next to swing from the lynching rope—“now is the right time to evolve the Uncle Ben’s brand,” the company announced.

We thought it was illegal to mention black people and evolution in the same sentence.

THREE WHITE BOYS AND A MONKEY
As part of what will inevitably be known historically as The Long March Through The Breakfast Foods, the three adorable Caucasian elves known and loved around the world as Snap, Crackle, and Pop were demeaned by a former Labour Party MP as “three white boys” who have been deliberately segregated from the Coco Pops monkey.

Fiona Onasanya was born with a face designed to scare children. In 2018 she became only the second person in history to be ejected from Parliament as the result of a recall petition after she was found guilty of perverting the course of justice for lying about a speeding violation.

She recently directed a Tweet at the UK branch of the Kellogg’s cereal company, race-shaming them for not featuring Elves of Color on their cereal boxes:

“Goodbye, Aunt Jemima—you were one of the good ones.”

In response, the ghoulish lady with the unpronounceable name noted that John Harvey Kellogg, founder of the Kellogg’s company, cofounded something called the Race Betterment Foundation, whose alleged mission statement was to combat “race degeneracy.” That sounds really cool, but the sad reality is that lately, the Kellogg Foundation has been funneling cash toward George Soros’s Open Society Institute, a bottomless money pit which enables people to complain about racist elves from here to eternity.

UNIVERSITY OF VIRGINIA CHANGES ITS LOGO BECAUSE IT REMINDED SOMEONE OF SLAVERY
Because George Floyd is now dead and is essentially the Dictator Emeritus of Western Civilization, expect the endless witch hunts to gleefully proceed apace.

Did you know that grooved handles on a sword represent 400 years of suffering for black people? Well, they don’t, but the mere accusation of racism is enough these days to make all living white people accede to your demands no matter how ridiculous they are.

Pressure from the usual suspects forced the University of Virginia to swap out its old logo—which featured crossed swords with “serpentine” handles—for new swords with smooth handles. Someone got it in their head that the grooved handles were intended to celebrate walls on campus that had been used to shield the public from observing slave laborers way back when that was a thing.

We don’t get it, either.

After the release of our new logos on April 24th, I was made aware of the negative connotation between the serpentine walls and slavery….I was not previously aware of the historical perspective indicating the original eight-foot-high walls were constructed to mask the institution of slavery and enslaved laborers from public view….Over the last few weeks, I have worked to better educate myself and that education will continue….There was no intent to cause harm, but we did, and for that, I apologize to those who bear the pain of slavery in our history.

We still don’t get it.

STATE OF RHODE ISLAND CHANGES ITS NAME BECAUSE IT REMINDED SOMEONE OF SLAVERY
We were under the impression that Rhode Island’s official name was “Rhode Island,” but how wrong we were! It’s actually “The State of Rhode Island and Providence Plantations,” which is cool because it not only evokes slavery, but it reminds people that they also had slaves up North.

Well, that’s all coming to an end. The state’s Mafia-appointed governor Gina Raimondo (we have no evidence of this, and we’re actually just kidding, but that’s an Italian name and Rhode Island is a Mob state, so do the math) recently announced that Rhode Island will be officially changing its name to “Rhode Island”:

Many of the State’s residents find it painful that a word so closely associated with slavery should appear in the official name of the State. The pain that this association causes to some of our residents should be of concern to all Rhode Islanders and we should do everything in our power to ensure that all communities can take pride in our State.

On Monday, she also tweeted:

Rhode Island was founded on the principles of acceptance and tolerance, and our state’s name – and actions – should reflect those values.

Do these people hear themselves? How are their minds so consistently capable of seeing things both ways at once? She says the state was founded on “acceptance and tolerance” after signing a bill to remove part of a name from a state that named itself after the fact that it had slave plantations.

Oh, and in case you were wondering, those slaves were listed in legal documents as both “blacke” and “white.”

UPSIDE-DOWN RED TRIANGLE: NAZI OR ANTIFA SYMBOL?
Facebook recently axed 88 ads from the Trump campaign, claiming that their use of an upside-down red triangle evoked the patches that political dissidents had to wear in Nazi concentration camps and that this was a bald attempt for Trump to Nazi-whistle to all his Nazi followers.

We would note that Facebook still has an inverted red triangle emoji in use, which looks exactly the same, so it’s curious that they would target only this ad.

Jonathan Greenblatt of the ADL essentially told Murtaugh to go piss up a rope, adding that upside-down red triangles send an “offensive and deeply troubling” message.

No one seemed to notice who the real Nazis are here, though—does anyone in their right mind think it was an accident that Facebook removed 88 ads?

OREGON COUNTY REVERSES FACEMASK EXEMPTION FOR COLORED PEOPLE
Lincoln County, Oregon, is named after an American president who said horrible things about black people. It is no wonder, then, that they recently passed a facemask ordinance that exempted “people of color” from having to wear the mask.

Their stated reason for this exemption was that we live in a white-supremacist society where black people wearing facemasks reminds everyone that although blacks are statistically far more likely to commit crime than any other group in America, to note this fact—or even to think about it for more than three seconds—is extremely racist.

This is in the larger context of black men fitting the description of a suspect who has a hood on, who has a face covering on. It looks like almost every criminal sketch of any garden-variety black suspect….[you’re] basically telling people to look dangerous given racial stereotypes that are out there.

Then, when it became very clear that the real intent of the exemption was to expose black people to coronavirus and make them easier to identify in criminal lineups, the county reversed their decision to exempt peeps o’ color.

EXILED CHINESE BILLIONAIRE CLAIMS THE CHINK-COMS PAY THE VATICAN HUSH MONEY
Guo Wengui (don’t worry, we can’t pronounce it, either) is an exiled Chinese billionaire who fled his nation of origin for the USA in 2014 after learning that the Chinese were about to charge him with a whole slew of crimes including kidnapping and rape.

In a recent interview, Wengui claimed that the Chinese Communist Party forks over two billion US dollars every year to the Vatican to buy their silence about China’s repression of religious freedoms.

Although we can neither confirm nor refute this allegation, French journalist Alban Mikozy notes that the Vatican has been courting China for a while now:

Pope Francis is a prudent man. He pursues a dream: to be the sovereign pontiff who will restore relations between China and the Vatican.In order to do this, he is ready to make a few concessions: say nothing about Hong Kong, do not get too excited when the Chinese leader talks about rewriting the Bible.

So if you’ve been wondering why Pope Francis sounds more and more like Karl Marx these days, this might be your answer.

“WHITE LIVES MATTER” BANNER FLIES OVER BRITISH SOCCER GAME; HOWLS OF RACISM ENSUE
The world is so topsy-turvy these days that it’s become a radical racist statement to say white people have a right to live.

At a recent soccer game in the English town of Burnley (they call it “football” over there, but they’re wrong), fans were treated to the sight of a plane carrying a “White Lives Matter” banner as it flew over the stadium.

Burnley’s captain Ben Mee said he was “ashamed and embarrassed” that anyone in England cares about white lives and that whomever was responsible needs to “come into the 21st century” and realize that white genocide is where it’s at.

The culprit, Jake Hepple, proudly claimed responsibility for the stunt on Facebook:

I’d like to take this time to apologise…to absolutely fucking nobody!…It’s now apparently racist to say White Lives Matter, the day after three white people got murdered in a park in Reading, but all we’ve seen on the TV is Black Lives Matter after George Floyd got murdered. What a mad world we live in.

Hepple’s girlfriend, Megan Rambadt, rescently posted online that her town had become “like a foreign country” and that “They [immigrants] need sending back on banana boats, stinkin bastards.”

Those two lovebirds sound like a fun pair of kids. Too bad England is doomed anyway.