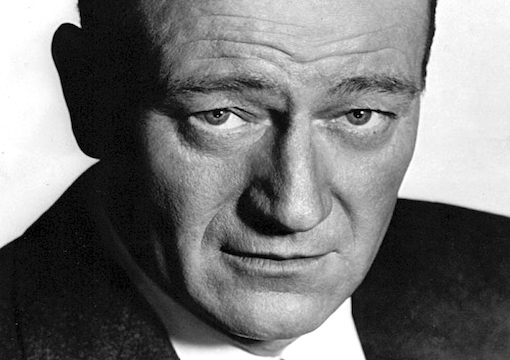 DIGGING UP THE DUKE JUST TO KILL HIM AGAIN
John Wayne was a man’s man—a big, swaggerin’, talkin’-out-the=side of his mouth brawler whom men feared and women desired.

But he was also white, so every trace of his memory must be erased.

There was a time not that long ago but which seems like an eternity ago at this point when Orange County was known for having Disneyland and swimming pools and one of the most reliably Republican voting blocs in the country. It was such a symbol for all things American that it changed the local airport’s name to John Wayne Airport when he died in 1979. (Wayne is buried in nearby Newport Beach.)

But last week, Orange County Democrats—led by a woman named Ada Briceño, who looks like she’s eaten more than her fair share of chimichangas and sopapillas, pushed through an “Emergency Resolution” to remove Wayne’s name from the airport because he’s a dead mean racist white guy, and they’re often the worst kind of mean racist white guy, not to mention the smell.

As supposed evidence for why we should all hate John Wayne rather than think he was hilarious, the angry brown Democrats cited his infamous 1971 Playboy interview where the Duke dropped the following golden nuggets:

I believe in white supremacy until the blacks are educated to a point of responsibility. I don’t believe in giving authority and positions of leadership and judgment to irresponsible people….I don’t feel guilty about the fact that five or 10 generations ago these people were slaves….Now, I’m not condoning slavery. It’s just a fact of life, like the kid who gets infantile paralysis and has to wear braces so he can’t play football with the rest of us….Our so-called stealing of this country from them [Indians] was just a matter of survival. There were great numbers of people who needed new land, and the Indians were selfishly trying to keep it for themselves.

We can vouch for this, as can anyone who’s ever had to stand behind an American Indian in a buffet line. They’re an incredibly selfish breed, not to mention the hygienic issues.
Without naming Black Lives Matter, the resolution hinted that a “national movement” was afoot that allows Persons of Color to throw tantrums whenever they damn well please, cuz ain’t nobody gots ta deal wit’ no racist BULLSHIT cuz it make me so angry I’m fi’n’ to have a stroke:

A national movement to remove white supremacist symbols and names is reshaping American institutions, monuments, businesses, nonprofits, sports leagues and teams, as it is widely recognized that racist symbols produce lasting physical and psychological stress and trauma particularly to Black communities, people of color and other oppressed groups, and the removal of racist symbols provides a necessary process for communities to remember historic acts of violence and recognize victims of oppression….There have been numerous calls to remove John Wayne’s namesake from Orange County’s airport because of Wayne’s white supremacist, anti-LGBT, and anti-Indigenous views.…

In times of endless public tumult such as these, we could only dream for some scientist to develop a potion that causes self-righteous people to spontaneously combust.

DE-WHITENING THE MAKEUP INDUSTRY
The fashion industry has always been intensely bigoted against and abusive toward—or is that bigoted toward and abusive against?—women of color. The shock, shame, self-hatred, eating disorders, sexually transmitted diseases, single-motherhood drama, and eventual drug overdoses that such discrimination causes in the WOCC—Women of Color Community—is incalculable. To even attempt to calculate the damage would be to engage in white supremacy, since it implies that Black Lives have a price tag on them.

Unilever is some giant makeup company that has been raking in the rupees for years with a skin-lightening product called Fair & Lovely. Dusky women across the Asian continent have been using Fair & Lovely in the hope, a hope shared by women across the globe since the dawn of man, that it will make them whiter.

But now some cigar-colored Pajeet named Sunny Jain, the head of Unilever’s Beauty & Personal Care department, says the company intends to remove words such as “lightening,” “whitening, “and “fair” from all of its products:

We are fully committed to having a global portfolio of skin care brands that is inclusive and cares for all skin tones, celebrating greater diversity of beauty. We recognize that the use of the words ‘fair,’ ‘white’ and ‘light’ suggest a singular ideal of beauty that we don’t think is right, and we want to address this.

White is not right. Yeah, we’ve been hearing that for years now.

“In times of endless public tumult such as these, we could only dream for some scientist to develop a potion that causes self-righteous people to spontaneously combust.”

The San Bernardino, CA Board of Supervisors voted 5-0 last week to declare racism a “public health crisis,” despite the fact that epidemiologists have yet to isolate the pathogen that causes racism, a weasel word that it described thusly:

The resolution also noted that black infants in San Bernardino County had a mortality rate twice as high as the county average, and of course it blamed “racism.”

It noted that the county’s black prison population was twice as high as the black percentage of the population, but it failed to compare black criminality rates to those of other races, which would seem to be a crucial missing element if one wishes to fully embrace the richness of this particular social tableau we’re painting here.

At a public hearing to discuss the resolution some sassy sista named Mabel Morris-Dugbartey got up and repeated the fiction that black people live in terror—rather than cause it—all across America:

It’s a beautiful thing to feel change happening in full effect, meaning there is hope for humanity and for the future, where my peers and I won’t fear bringing our children into such a dangerous world that will just dehumanize them.

Progress in 2020 means that black Americans can be whomever they want to be, no matter if it corresponds to reality or not.

THE BROWNING OF AMERICA’S YOUTH
US Census data from 2019 has established that for the first time in this creaky old Republic’s history, most people age 16 and under are nonwhite and Hispanic.

Although white non-Hispanics accounted for close to 90% of the country’s population as recently as 1960, last year’s data shows that quotient has plummeted to 60%.

Whites are also older on average than other Americans, with a median age of nearly 44 compared to 32 for blacks and 30 for Hispanics.

This wouldn’t be much of a big deal if, say, all those nonwhites hadn’t been trained since birth to despise the very idea of whiteness. But they have, and our creeping suspicion is that the Powers That Be want young nonwhites to revolt when asked to pay off the pensions and Medicare for aging whites—which is convenient for the Powers That Be, seeing as how they’ve already looted all that money.

GAY-LOOKING SAN FRANCISCO POLITICIAN SEEKS TO CANCEL MARK ZUCKERBERG
Since we understand how “wokeness” operates far better than the woketards do—it simply leads to heightened levels of being awakened to the point where you pop an aneurysm and are functionally retarded for the rest of your life—we relish the sight of an Extremely Awake Person seeking to destroy someone for being Not Quite Woke Enough.

San Francisco Supervisor Matt Haney has a twinkle in his eyes. We suspect that, yes, it is that kind of twinkle—this is San Francisco, after all.

We were unaware that the City by the Bay has a Zuckerberg San Francisco General Hospital. Doesn’t exactly roll of the tongue, does it? Apparently Zuck and his Token Chinese Wife forked over $75 million to the hospital five years ago just for the privilege of slapping his name at the beginning of the hospital’s official name.

Twinkly Matt Haney, apparently under the delusion that Zuckerberg is a proponent of hate speech and a closeted Donald Trump supporter, wants Zuckerberg’s name removed from the hospital, and he wants it done NOW:

Much of it seems directly tied to Mark Zuckerberg

Why is his name still on our SF public general hospital?

It’s there to piss you off, Matt. And that’s why we hope it stays. It would be uncivil for us to wish you get a nasty case of COVID-19 and then have to check into Zuckerberg San Francisco General Hospital for an extended stay, so we’re not going to do that.

GENETIC CULLING OF MINORITIES IN CHINA
The Associated Press recently conducted an in-depth investigation of Chinese government stats, official state documents, and interviews with dozens of ethnic Uighurs on the country’s northwestern frontiers and drew a picture that suggests the Chi-Coms are softly committing genocide against the mostly Muslim minority group.

For decades, the Chinese communist government had policies toward ethnic minorities that were similar to American affirmative action—they received certain perks such as job promotions over more qualified Han Chinese simply based on some vague notion of “equality.” They were even permitted to have more children than ethnic Chinese were under the infamous one-child policy.

But now, with Chinese nationalism on the rise, the Uighurs are being singled out for apparent extinction. Whereas ethnic Chinese do not go to jail for violating the new two-child policy, Uighurs receive imprisonment. They also reportedly endure forced abortions, IUD implants, and involuntary sterilizations while interred at concentration camps.

Acccording to Joanne Smith Finley, who works at Newcastle University in the U.K.:

It links back to China’s long history of dabbling in eugenics….you don’t want people who are poorly educated, marginal minorities breeding quickly….What you want is your educated Han to increase their birth rate.

Looking at it from a completely different angle, the Chinese seem to be eagerly pursuing their own interests these days. We remember when it used to be that way on this side of the world.