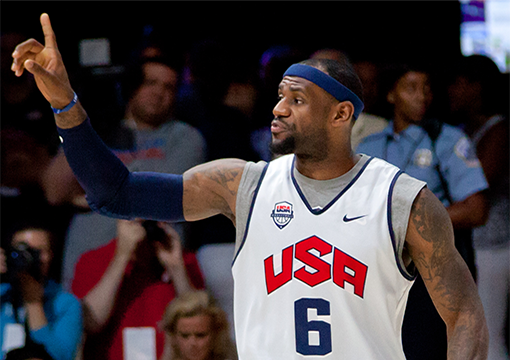 The Week’s Most Glamorous, Clamorous, and Amorous Headlines

LEBRON JAMES SAYS “NO” TO “BLACK LIVES MATTER”
Three out of every four National Basketball Association players is black, but apparently that’s not black enough. Although the average salary of an NBA player is the equivalent of the gross domestic product of several small African nations, these uppity ball-dribbling ingrates still see fit to complain.

When George Floyd died as a result of resisting arrest after passing a bad check and surviving COVID-19 with a heart condition and meth and fentanyl in his system, the world forever changed. We all know this. And the NBA, since it knows that not every black male can become a basketball player, sought to buy into the complete corporate surrender to Black Lives Matter by suggesting a list of 29 corny and essentially meaningless phrases that millionaire black players can put on their jerseys to show their support for black criminals with heart conditions who resist arrest and wind up dying as a result:

Black Lives Matter; Say Their Names; Vote; I Can’t Breathe; Justice; Peace; Equality; Freedom; Enough; Power to the People; Justice Now; Say Her Name; Sí Se Puede (Yes We Can); Liberation; See Us; Hear Us; Respect Us; Love Us; Listen; Listen to Us; Stand Up; Ally; Anti-Racist; I Am A Man; Speak Up; How Many More; Group Economics; Education Reform; Mentor.

LeBron James, as we’ve been telling you for years now, is a black basketball player whose French first name translates into English as “The Bron.” People were saying he was the greatest NBA player who ever lived before he even played a game in the NBA. But because he’s black, and because black people are now automatically presumed to be just bursting with wisdom, people look up to The Bron as if he knows anything beyond how to throw a ball into a hoop.

That’s why they were shocked and appalled when James announced last week that he would be one of the few NBA players who have been herded together in Orlando to play an audience-free season in a little protective anti-COVID celibate bubble to play the season without a social-justice message on his jersey:

It was no disrespect to the list that was handed down to all the players. I commend anyone that decides to put something on the back of their jersey. It’s just something that didn’t seriously resonate with my mission, with my goal…. A lot of people still don’t get it, and a lot of people are still afraid to talk about the racism that goes on in America, especially for our people.

This giant loping primate speaks the truth. As anyone who’s been living in America for the past two months is well aware, no one ever says a word about anti-black racism. So instead of just wearing some stupid slogan on his shirt, LeBron is sinking $100 million of his estimated net worth of $750 million into some stupid “new media company dedicated to amplifying Black voices.”

This comes as wonderful news, because as we’ve already noted, if there’s one thing this country needs, it’s more black people talking about black-people issues.

WHOLE FOODS SAYS “NO” TO “BLACK LIVES MATTER,” TOO
Whole Foods is widely known as a place where white people can buy sustainable organic baby eunuch carrots for $14 each. It’s also the sort of place where white people who can afford $14 baby eunuch carrots can assuage their unconscious guilt for disinheriting lower-class white people and setting the stage for their extinction by pretending that they have anything in common with poor urban blacks besides the fact that they keep pushing them out of urban neighborhoods by gentrifying them to the point that they wind up putting a Whole Foods there.

Cambridge, MA—which is well-known as a place where a lot of oppressed and marginalized people live—recently underwent the nearly imperceptible shock waves of an extremely mild social kerfuffle when several Whole Foods employees walked off the job and started chanting inane slogans outside the store after management told them that their “Black Lives Matter” facemasks violated a company policy.

“As anyone who’s been living in America for the past two months is well aware, no one ever says a word about anti-black racism.”

When CBS News asked why they would ever do such a punishably racist thing, Whole Foods replied with the following evasive, dog-whistle-filled statement:

WASHINGTON REDSKINS TO BE EXTERMINATED
We were always under the impression that the name “Washington Redskins” was a homage to the brave warrior spirit that Native Americans showed when they were eventually being overwhelmed and defeated by superior European technology. After all, it’s not like the football team was called the “Washington Indigenous Losers” or the “Washington Alcoholics” or the “Washington Casino Owners.”

Still, since the modern collective bloodlust will apparently not be sated until the only comments permitted to white people will revolve around the idea that white people shouldn’t be allowed to comment about anything, the Redskins’ management has finally caved to pressure and announced that for the coming season, they will no longer be called the Redskins, the name they’ve used since freakin’ 1932:

We want to keep our sponsors, fans and community apprised of our thinking as we go forward. Today, we are announcing we will be retiring the Redskins name and logo upon completion of this review. Dan Snyder and Coach Rivera are working closely to develop a new name and design approach that will enhance the standing of our proud, tradition rich franchise and inspire our sponsors, fans and community for the next 100 years.

May they never, ever win another battle again—just like the Cherokee.

IT’S OK TO ASSAULT THE POLICE NOW
A recent videotaped scrape between police and escaped zoo animals in the Bronx shows the degree to which the nation’s local police departments have been neutered by this recent “social justice” power grab that, after deep scrutiny, seems like nothing beyond an excuse to get rid of all local policing and replace it with either a federal or a global police force.

On July 1, police approached a man who was parked illegal in front of a fire hydrant on Morris Avenue in the Bronx. When police asked the vehicle’s owner to move the car, he refused. A crowd formed, and when police told them to step back, several members also refused. One of them, a 29-year-old with the very Founding Fathery name of Wisnel Manzueta, punched a cop and then held him in a headlock—a move which was recently denied to New York City police as part of some dimwitted “police reform” package.

Even though the assault is on tape and the perp has been identified, prosecutors have declined to press charges against Manzueta. This prompted Police Benevolent Association leader Patrick Lynch to blow off some verbal steam:

Our city needs to wake up to the fact that our leaders have surrendered the streets to chaos. This was a near-riot situation where a cop is fighting for his life, and somehow his attacker was allowed to go free. We expect the Bronx DA to review the case and bring real charges, carrying real penalties, forthwith. If that doesn’t happen, we should just run up the white flag and admit that the criminals are in charge.

Oh, they’ve already run up the surrender flag. But it’s a black one rather than a white one.

PENTAGON MOVES TO BAN CONFEDERATE FLAG
After George Floyd as a direct result of resisting arrest while under the influence of meth and fentanyl, many higher-ups in the US Armed Forces decided it had something to do with the Confederacy and that all Confederate symbols must be purged from US military bases.

For one thing, we’re not sure why Confederate flags were permissible anywhere on US military bases in the first place, seeing as how the USA’s costliest war in terms of lives lost was the one where the USA defeated the Confederacy. It’s sort of like NATO forces allowing Nazi memorabilia—it simply doesn’t make much sense.

Even though President Trump has done some cool things lately such as saying that he opposes the removal of statues dedicated to Confederate soldiers on American military bases and that NASCAR should allow its fans to keep flying Rebel flags at races because it’s a form of free speech, it appears that the entire Deep State Globalist Military-Terrorist Complex opposes him.

Gen. Robert Abrams, commander of US forces in Korea, says the Rebel flag, rather than the phrase Black Lives Matter, is divisive:

While I acknowledge that some might view it as a symbol of regional pride, many others in our force see it as a painful reminder of hate, bigotry, treason and devaluation of humanity. Regardless of perspective, one thing is clear; it has the power to inflame feelings of racial division. We cannot have that division among us.

It appears now that the Pentagon is defying Trump and is currently drafting a policy document that will ban the Confederate flag from ever being displayed at American military bases again.

For decades now, any sentimentality toward the Confederacy has been condescendingly referred to as the “Lost Cause.” It’s time to extend that term to the United States of America. It’s over. It’s simply not official yet.

NEW YORK TIMES EDITOR RESIGNS BEFORE SHE GETS CANCELED
Since everyone in the media who isn’t openly genuflecting before black people and performing oral sex upon them while washing their feet will be fired and shunned before the month of July is over, it’s not a great big news story that an opinion editor for The New York Times resigned last week because journalism has ceased to exist under the thrall of the new racial religious orthodoxy. What’s notable about the case of Bari Weiss, though, is the eloquence with which she delivered her resignation:

What rules that remain at The Times are applied with extreme selectivity. If a person’s ideology is in keeping with the new orthodoxy, they and their work remain unscrutinized. Online venom is excused so long as it is directed at the proper targets….The paper’s failure to anticipate the outcome of the 2016 election meant that it didn’t have a firm grasp of the country it covers….A new consensus has emerged in the press, but perhaps especially at this paper: that truth isn’t a process of collective discovery, but an orthodoxy already known to an enlightened few whose job is to inform everyone else….I was always taught that journalists were charged with writing the first rough draft of history. Now, history itself is one more ephemeral thing molded to fit the needs of a predetermined narrative….I can no longer do the work that you brought me here to do—the work that Adolph Ochs described in that famous 1896 statement: ‘to make of the columns of The New York Times a forum for the consideration of all questions of public importance, and to that end to invite intelligent discussion from all shades of opinion.

We are moving into a world where people no longer have opinions; they simply receive them.

THE BLACK PLAGUE RETURNS TO MONGOLIA
Rumor has it that the Black Death which ravaged Europe in the 1300s was caused when Mongolian soldiers from the Golden Horde threw plague-infected corpses over a wall in what is now Crimea in a deliberate attempt to transmit the bubonic plague to Europeans. The Black Death wound up killing 200 million Europeans and is thus unquestionably the largest attempt at racial genocide in world history.

Well, like they say, turnaround is fair play and what goes around comes around, and now comes word that the Mongolian idiots out there in Mongolia are enforcing lockdowns because a 15-year-old boy died of the bubonic plague after eating a marmot.