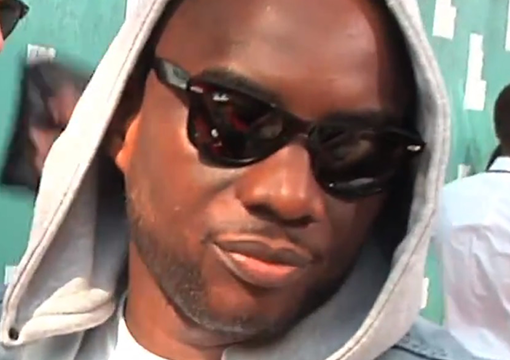 The Week’s Most Incurable, Unendurable, and Uninsurable Headlines

BLACK RADIO HOST WITH ATROCIOUS SPELLING SKILLS SAYS JEWS “HAVE THE POWER”
A New York radio host who was born Lenard Larry McKelvey insists on calling himself “Charlamagne [sic] tha [sic] God,” which immediately brings up three problems. The first two involve the fact that he can’t spell, and the third implies that God wouldn’t be able to spell, either.

If we know anything about God, it’s that his grammar skills are impeccable.

But despite being fundamentally illiterate, Charlamagne is black. He talks about being black all the time. He talks about it so much, one might think it’s the only thing he ever thinks or cares about. And there are rich rewards in the modern era for being monomaniacally obsessed about race—provided that you’re black.

Nick Cannon is another black person whose sole “talent” consists of being black and talking about his blackness. Even though he’s worn “whiteface” to portray an idiotic white dude named “Conor Smallnut,” there are no penalties for bashing white people these days; instead, you get a promotion. Cannon’s estimated net worth is $30 million.

So far, so good. And then he had to go and mention Jews. Oops.

On a recent episode of his podcast Cannon’s Class, his guest was Professor Griff, formerly of the rap group Public Enemy. Cannon made the following utterly dehumanizing comments about white people:

When you’d have a person that has the lack of pigment, the lack of melanin, that they know that they will be annihilated….We’re soul brothers and sisters. That’s the melanin that connects us. So the people that don’t have it are a little … and I’m going to say this carefully … are a little less….So then they’re acting out of fear. They’re acting out of low self esteem. They’re acting out of a deficiency. So therefore the only way that they can act is evil. The only way they can … they have to rob, steal, rape, kill, and fight….They had to be savages. They had to be barbaric because they’re in these Nordic mountains. They’re in these rough torrential environments. So they’re acting as animals….So they’re the ones that are actually closer to animals. They’re the ones that are actually the true savages….And that’s even from the white nationalists to the white supremacy mentalities, to Donald Trump, himself, wanting to build walls. They’re trying to keep their, what they consider purity….It’s just been proven … what was it … National Geographic just put it out. By, what, 2050, every person will be a person of color.

He mentioned Jews, but not nearly in such demeaning terms. His huge thoughtcrime was to allege that black people are the real Jews:

And we talk about the six corporations, when we go as deep as the Rothschilds, centralized banking, the 13 families, the bloodlines that control everything even outside of America. When we talk about the people who, if we were truly the children of Israel, and we’re defining who the Jewish people are, because I feel like if we actually can understand that construct, then we can see that there is no hate involved. ….You can’t be anti-Semitic when we are the Semitic people, when we are the same people that who they want to be, that’s our birthright.

Guess which comments got him fired? Days after his comments, which were recorded last year but only aired a couple weeks ago, ViacomCBS issued the following statement:

[Viacom] condemns bigotry of any kind and we categorically denounce all forms of anti-Semitism…We have spoken with Nick Cannon about an episode of his podcast ‘Cannon’s Class’ on YouTube, which promoted hateful speech and spread anti-Semitic conspiracy theories. While we support ongoing education and dialogue in the fight against bigotry, we are deeply troubled that Nick has failed to acknowledge or apologize for perpetuating anti-Semitism, and we are terminating our relationship with him.

SELF-HATING NEGRESSES ARRESTED FOR BEFOULING “BLACK LIVES MATTER” MURAL
Sometimes the only incentive for reading mainstream news stories is spotting exactly where they’ve mangled the narrative. A Google search of MSN.com yields over 60,000 results for the phrase “peaceful protesters.” In other words, all the smashing and looting and burning and raping and murdering that’s been consuming the nation since late May involves peaceful people seeking a peaceful solution to quantifiable and scientifically undeniable social problems. It’s only the right-wingers who pull “stunts” and seek “attention.”

Thus, when a pair of black Republican Christian women were recently arrested for pouring black paint all over the giant yellow Black Lives Matter mural that’s been painted on Fifth Avenue in Manhattan, MSN referred to them as “right-wing gadflies…who have pulled similar stunts before.” The women, Bevelyn Beatty, 29, and Edmee Chavannes, 39, scream about Jesus and abortion, even though they live together and appear to be childless.
Every reader is challenged to find a single instance over the past 10 years of MSN.com referring to left-wing gadflies who pull stunts for attention. You won’t be able to do it.

CALIFORNIA TEACHERS DEMAND FREE TUITION FOR BLACKS ’N’ INJUNS
The California Faculty Association claims to represent nearly 30,000 educators in a state that is filled with natural beauty and human ugliness. The union recently put out an eight-page document with the unwieldy title of “California Faculty Association statement of anti-racism and social justice demands in the wake of anti-black racism, violence, and murder.” It’s highly informative for no other reason than to illustrate that modern education has nothing to do with education and everything to do with indoctrination:

George Floyd’s public execution is shocking, but not surprising given the persistence of anti-Black racism and white supremacy that dehumanizes Black people. It is one in a long chain of similar transgressions and murders, most recently including Breonna Taylor and Ahmaud Arbery, and people are taking to the streets because the United States has failed to address this. CFA is a union representing faculty in the California State University System, one that is dedicated to anti-racism and social justice. As scholar activists, we have an obligation to address the structural racism that shapes policing in our society and that resulted in the murder of George Floyd. It is not enough to condemn this public execution that calls lynching to mind. Against the backdrop of a pandemic that does discriminate, resulting in disproportionate deaths to Black people, disproportionate economic burdens to Chicanx/Latinx people, decimation of Native/Indigenous people, and acts of violence and hatred against Asian Pacific Islander communities, we must take this opportunity to call on our leaders to not only condemn racism and white supremacy, but to announce programs to enact systemic change. In the coming days, we will issue a broader statement to highlight our anti-racism and social justice campaign and invite your participation.

George Floyd? Are you talking about the guy who told Minneapolis police that he was foaming at the mouth as the result of a self-administered drug enema? Or are you “educators” completely uneducated about what actually happened there?
In case they didn’t drive home the point that their only “educational” goal was to demonize whites, CFA Vice President Sharon Elise tossed a cherry atop the Hate Sundae:

The US is a racialized society based on white supremacy where opportunities, resources, power and human rights are structured by race to privilege whiteness, one where race structures disadvantages such as poverty, barriers to opportunity and power, and failure to recognize humanity, resulting in a racial hierarchy.

The group also demands the enactment of Assembly Constitutional Amendment 5, which mandates a return to affirmative action policies in the California university system. They say blacks deserve free tuition to reverse the decades-long trend of declining enrollments amongst Black, Native, and Indigenous students in the CSU and other higher education institutions.”

They didn’t say a word about the fact that in California, Asians are only 10 percent of the population yet represent 40 percent of undergrads. That’s because California currently uses a merit-based admissions system, and Asians perform sparklingly well on standardized tests.

You can blame white supremacy for that.

GUN-BRANDISHING ST. LOUIS HOMEOWNERS CHARGED WITH FELONY FOR SCARING RIOTERS
In case you were holding out for further evidence that our current political system is one of anarcho-tyranny, look no further than the fact that the chubby St. Louis couple who pointed guns at “peaceful protestors” who’d smashed through a gate and were parading through their neighborhood have been charged with a felony weapons count for aiming their guns at the invaders.

St. Louis Circuit Attorney Kim Gardner has charged Mark and Patricia McCloskey but to our knowledge has not charged any of the peaceful protestors who were trespassing in a private neighborhood. When people criticized her decision to charge the McCloskeys, she said it reminded her of the KKK.

Can we just fast-forward to 2021 already?

CHINK-COMS TELL CHRISTIANS TO REMOVE PICTURES OF JESUS
Communism is an ideology that with tremendous appeal to fanatics and blind followers, which is why it’s so intensely opposed to religion—it sees it as competition.

The Christian Post reports that Chinko-Communist authorities are harassing Christian villagers in the massive country’s rural hinterlands, busting into their homes and demanding they remove pictures of Jesus Christ and replace them with photos of Mao and whoever their current leader guy is.

The Chinese Communist Party has announced this is all part of a “Sinicization” program designed to shunt people with uncontrollable fanatical impulses away from Christianity and toward Marxism. After all, both belief systems say we’re all equal and that it’s cool to be poor.

Reports also say that authorities are threatening to withhold welfare payments to avowed Christians. One woman claims they cut off her measly $28-a-month pension when she thanked God rather than the Communist Party after receiving her prior installment. An unnamed preacher in a northern Chinese village said, “All impoverished households in the town were told to display Mao Zedong images. The government is trying to eliminate our belief and wants to become God instead of Jesus.”

This goes against everything that science, medicine, and logic have taught us. Everyone knows God is too tall to be Chinese.

HUMAN FERTILITY RATES POINT TOWARD EXTINCTION
If you’re old enough to remember the 1970s, you’d recall that a firm plank in the leftist political program was known as “ZPG”—Zero Population Growth. An overpopulated planet was considered the world’s most imminent catastrophe. And then they realized where all the population growth was occurring and concluded that it would be racist to even make it an issue, so they shut up about it.

A report published in The Lancet suggests we may no longer have to worry about overpopulation whether it’s racist to worry or not. Researchers at the University of Washington’s Institute for Health Metrics and Evaluation have crushed the bodies and come to the conclusion that the world is headed for a “jaw dropping” population crash.

In 1950, the average woman squeezed out 4.7 children, and by all accounts it was that seven-tenths of a child whose birth was the least painful. By the year 2100, the global fertility rate will drop to 1.7 children per child, which is a sub-replacement rate. The populations of both Italy and Japan will drop by more than half. And although world population is expected to peak around the year 2064, it will shave nearly a billion people off that total by the year 2100. Exactly how that “shaving” occurs is yet to be determined, but it will not be pretty. This is shaping up to be the worst century in world history.