The Age of Obama 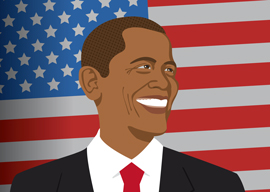 It was the Sun King, Louis XIV, who uttered the immortal edict of classical despotism: “L”Ãtat, c”est moi!“

There is some debate amongst historians as to whether Louis ever uttered these precise words”though it’s rather pointless, especially since his declaration that “It is legal because I wish it” is fully documented. The operative crux for either statement is that power resides with the person rather than the polity.

Similarly, we live in the age of Obama, a transition in time during which the apparent safeguards of the government’s judicial and legislative branches are of virtually no protection whatsoever.

A lesser among the many current imperial abuses is the granting of “immunity” despite issuance of subpoenas. Over the past couple of weeks Obama has continually excused Office of Political Strategy and Outreach director David Simas from appearing before a House of Representatives committee. Barack allegedly tried to strong-arm the committee chairman behind closed doors, and when that failed to produce results he deigned not participate.

Like a mythical cloak of invisibility, the president invokes powers he does not possess. Defiance of court procedure is the reason I supported impeachment of Clinton; it mattered not one whit with whom he slept”but vitally, as both national leader and prominent attorney, he felt entitled to repeatedly lie under oath. Whether or not one believes an issue is a “witch hunt,” due process must apply.

“The first time any president claims, while endorsing legislation, that he doesn”t feel constrained by the same, that Chief Executive should be unhesitatingly arrested and put into shackles.”

More troubling is the matter of Obama’s summary executions. Since the “War on Terror” began, a sustained debate between government and civil libertarians has been waged over whether it is acceptable to ever kill without the formality of a conviction. Those of us who are uncomfortable with such acts might tepidly acquiesce on the technical grounds that those accused (and assassinated) had ambiguous standing.

However, in the past year Obama and his cohorts expanded their treachery by allocating to themselves the authority to target Americans for death if they so choose. In this, these petty men assumed the role no longer of merely executioner, but judge and jury as well. While the “imminent threat“ buzzwords have duped many a disinterested voter, it should be noted that American law enforcement, even when endowed with vast funds and manpower, routinely is in error regarding the guilt of high profile suspects. There have always been evil Americans; the historical difference has been the existence of good laws binding their mayhem.

Most threadbare within Obama’s mantle of manifest dominance is his evident choice to become traitor to the electorate which granted him the privilege of governing. Even as this is being written there are tens of thousands of lice-ridden, tuberculosis-incubating, poverty-stricken invaders on our perimeter. It is the duty of the president to protect you from them.

The first and foremost responsibility of any leader, democrat or despot, is preservation of the nation. Border defense by any means necessary (including, for media weaklings, proportional force) is not a matter of preference but one purpose of office. If the citizenry is not secure in their persons there can be no peace, no prosperity, and ultimately no recognizable populace. If Barry, Bush, or their brethren want to rule the Mexicans, they should run for office in Mexico.

Presidential signing statements, unconstitutional no matter who amends them, are the least public but most perilous facet of the newly acquired “presidential prerogative.” Indeed, they have a modern history beginning with Reagan. (Some extend this as far as James Monroe, though those “signing statements” bear as much resemblance to current usage as the National Road does to the National Highway System.) Since the 1990s the tenor of these devices has become ominous; although some note that George W. Bush’s were more numerous, those of Barack Obama are more consequential.

For either party to allow such obscenities is absolutely beyond the pale. The first time any president claims, while endorsing legislation, that he doesn”t feel constrained by the same, that Chief Executive should be unhesitatingly arrested and put into shackles.

Bills originating from representatives and duly prepared for enactment are never open to interpretation because one happens to sit in the Oval Office. To the extent we engage with the delusion that idle mouthings can override intricate lawmaking, the primary agenda for Congress should be meticulous regulatory constraint of signing statements. They must have no legal efficacy, no official should be permitted to inveigle them, and to the extent any president does so he ought to forfeit office immediately.