The Battle of Milo 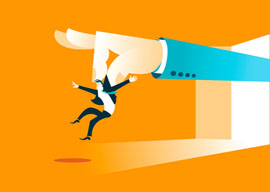 “There are certainly people who are capable of giving consent at a younger age,” Milo Yiannopoulos said on a late-night podcast full of nerds. “I consider myself to be one of them.” He then went on to say some more outrageous things. He said he wouldn”t be “nearly as good at giving head if it wasn”t for Father Michael.” He also said boys (he meant young, gay men) can benefit from sexual relationships with older men. Priest jokes and ambiguous relationship discussions not withstanding, the crux of the problem here is that Milo suggested there are 13-year-olds (an age that came up later in the discussion) who can have consensual sex. Though he may be technically correct, it was a remarkably naive thing to say and a great example of how someone talks when they”ve been getting away with murder for years. For the record, gays, no, you may not have sex with 13-year-olds under any circumstances. Even if you suspect said teen is gay. Normalizing such behavior is how young straight boys get molested by camp counselors. Though there are gays who may have convinced themselves they enjoyed the experience, there are plenty of straights who contemplate murder for decades after the event. Others choose suicide.

“Milo got a get -out-of-jail free card for being a gay Jewish Catholic immigrant with a black fetish.”

I know Milo and he understands this. Later in the interview he said, “The law is probably about right.” Of course the left has been out for blood since Milo took everything they hold dear about homosexuality and used it to promote a conservative agenda. The hounds attacked until his talk was canceled at CPAC, he lost his book deal, and he was no longer employed at Breitbart. This seems an egregious punishment for someone who said something that was factually incorrect. Deep down, they know Milo doesn”t want boys to be molested. He’s written about it extensively. He’s also one of the most accessible people in media. If you”re not sure how he feels about a subject, ask him. Most of this went down on Monday and by Tuesday Yiannopoulos hosted a press conference where the Q&A was longer than the apology speech. He played it formal and straight as opposed to the openly camp character he played on TV. He also unequivocally denied any underage sexual behavior might be appropriate. None of it was sufficient however because there are so many other factors regarding the persecution of the right’s most charming man.

Firstly, he violated the right’s ultimate taboo. As Michael Malice pointed out on my show, the right can be just as politically correct as the left. They just choose different hills to die on. You can mispronounce someone’s pronouns or refuse to let a drag queen in the women’s bathroom but you can”t have an open mind about pubescent sexuality. The right is not interested in nuance when it comes to this subject and that gets complicated when we move around genders and sexual preference. If a 40-year-old male teacher has sex with his 14-year-old female student, I want to take him into the parking lot and beat him within an inch of his life. If a female teacher does the same thing, I don”t feel nearly the same rage. Similarly, gays have less chastity than straights. If a woman is known as a complete whore, she may have trouble finding a man. The law reflects this. If a newspaper calls a woman a slut, they”re likely to get sued for a lot more money than if they were to accuse a man of the same thing. However, gays never get dumped for being a slut. No gay man is turned off by how many partners his lover has had. I am willing to concede there are adolescent homosexuals out there who would not be traumatized by sex with an older man but the risk just isn”t worth it. Sorry, sexually advanced gay teens” you”re going to have to wait.

This brings me to the second factor at play here. Liberals have no idea what gays get up to. I”ll never forget Jon Stewart on The Daily Show claiming that gays have the same lifestyle we do. He claimed he knew this because he lives in the West Village. I”ve been surrounded by homos my entire adult life and the shit they get up to would turn your hair white. They laugh in my face when I brag about threesomes and say anything under an eightsome isn”t worth talking about. They are incapable of monogamy and will screw pretty much anything that moves several times a day. At Circuit Parties they will do meth and have sex, non-stop for two days straight. A friend of mine caught AIDS that way. Their relationships with adolescent men are no different. When old men become less attractive (trolls) they use money to entice younger men (twinks) and buy them whatever they want in exchange for sex. I often recount the story of author Bruce Benderson who once told me he was sitting in a room full of teenage boys when he was visiting Montreal and it occurred to him his culture was corrupt (I believe his actual words were “This is simply not right”). Liberals have been normalizing the gay lifestyle and pretending they”re exactly the same as us for so long, they forgot to check in on what goes on behind closed doors. It’s pretty gross to be honest. I love gays and enjoy their company but every time a sex story comes up, I”m forced to put my hand up in the air and exclaim, “No thanks.” The left doesn”t really care about what gays get up to the same way they don”t care about black crime. They see both groups as pawns who come in handy on the front lines of the culture war. They also don”t really care about pedophilia. In fact, they often glorify it. None seem worried that open borders with Mexico are open borders with a country where the age of consent is 12, and their lack of disgust when Lena Dunham confessed to molesting her sister was also telling (her sister is now gay).