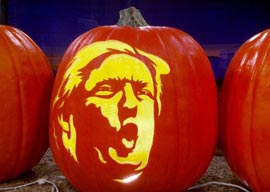 July 4th is the day America celebrates liberty but Halloween is the opposite. It’s the day we all get together and ask necrophiliacs what to do with fun’s cadaver. These ghouls have a lot of suggestions for us but they”re all disgusting. What used to be a silly theme for a party in late October has become a logic pretzel where we crowbar political correctness into every nook and cranny until the only way you can avoid appropriation is to come dressed as yourself.

The festivities began early this year. “Sooooooo wal-mart [sic] is also selling fake noses for an “arab [sic] shiek” [sic] costume,” the presumably trans Sara Yasin, a Palestinian Buzzfeed reporter from Brooklyn, stated on Tuesday. “Just another reminder of how normalized it is to be racist against arabs [sic],” she later added. Walmart responded by dropping the nose immediately (this is the same nose that Macklemore was accused of anti-Semitism for wearing last year). Around the same time, Walmart got in trouble for selling an Israeli soldier costume that prompted Vanity Fair to ask, “Why Can”t America’s Biggest Retailer Learn from Its Halloween Mistakes?” I don”t know”maybe it’s because you keep moving the goalposts? Almost every country in the world has a military. Can their kids please dress up on Halloween? As for the nose, yes, Jews, Arabs, and blacks do have bigger noses. Nostrils are used to get moisture out of the air and desert climates require more surface area to do so. Middle Eastern noses tend to go away from the face whereas African noses tend to go parallel. I come from Scotland where it rains every day, which is why my nose looks like a zit with two holes poked in the bottom. I”ve noticed this, as have you, but “Political correctness is a war on noticing,” so close your eyes or you”re racist.

“Nobody has to explain why a particular costume violates protocol. Just say “Boo!” and everyone runs away screaming.”

Also on Tuesday, the head ghouls at Gawker claimed, “Racist Halloween Celebrations Kick Off [note their enthusiasm] With Blackface Nicki Minaj.” Apparently, a high school student in Florida dared to darken her skin to appear like pop star Nicki Minaj and was promptly shamed off the Internet. Nobody has to explain why a particular costume violates protocol. Just say “Boo!” and everyone runs away screaming. The fact that Nicki Minaj wears a blond wig in a clear appropriation of white culture is irrelevant. Blackface is verboten. Why? I still don”t know. As far as I can tell, it’s because a small percentage of minstrel shows were negative. The other 90% mean nothing, including the incredibly popular Black and White Minstrel Show, which aired across Europe from 1958 to 1978. When Fred Armisen does his Obama he looks like a black man who just saw a ghost but we”d rather have inaccuracies than violate the ridiculous taboo of including skin tone in a costume.

Logic has nothing to do with this crusade because political correctness is a religion. It’s faith-based and their laws have been written in stone, never to be questioned”ever.

North Carolina State tried to solidify at least nine of these commandments in a recent announcement from Academic and Student Affairs entitled, “Making Halloween an Inclusive Experience for All.” It’s a nice, concise list that explains that all you have to do to come up with a Halloween costume is make sure: It can”t be viewed as culturally, ethnically, or racially biased; its sexiness or funniness isn”t linked to any of the aforementioned categories; it doesn”t resemble a Mexican or an Indian or a rapper; you don”t think it’s “only a costume”; you would be okay with the whole world seeing it; you would be okay with the whole world seeing someone else wearing it if they were associated with you; it aligns with your club’s goals; the theme is thoughtfully verified; and obviously there is no tokenization. They make it clear you can”t mock gangsters” low-slung jeans even though we”re talking about murderers here and the dude they used for the costume is white (they called him “whitey” to be triple sure). You can dress like a punk rocker because they”re white but you can”t mock a white criminal because criminals are often black. Make sense? NCS” rules (which all seem to be saying the same thing) then link to a “helpful infographic flowchart“ that lists almost nothing but DON”Ts and maybe one DO (but it’s for a nonwhite).

MSNBC also has a list for 2015. It includes the blackface listed above (CNN’s includes whiteface) as well as Caitlyn Jenner, Cecil the Lion, and sexy Donald Trump. These lists are invariably written by women and are rife with spelling errors such as “Every year, with out [sic] fail” and “change your skill [sic] tone.” The explanations for their arbitrary rules usually involve ultimate argument-settlers such as “So, let’s agree to not,” “just don”t,” and “Period.” I”m reminded of when blacks tell me I can”t discuss racism with them because I don”t know how it feels. People who don”t want to engage in a real discussion usually lack beliefs with any kind of conviction. That’s fine, but you”re not allowed to tell me what to do after that.

So why are we not allowed to question these rules, and why are there so many of them? The short answer is: black failure white guilt. This albatross around our necks is what drives most of the narrative. It’s the same reason the media is playing a loop of an angry cop dragging a black girl out of her desk when we”d never see that clip if the races or genders were any other combination. The dogma is: Blacks aren”t doing well in today’s society ergo slavery and white privilege are to blame and we all need to be constantly checking ourselves before we wreck ourselves. The (mostly white) liberal elites love the blame game because it enables them to tell other people how to behave, how to talk, what to wear, how to party, and what to wear to your party. The problem is, blacks tend to be bored by such academic minutiae. They don”t want to play this stupid game, so the Marxist academics have recruited Asians and Mexicans and Indians and demand they get aboard the hate train.