The Case for Continentalism 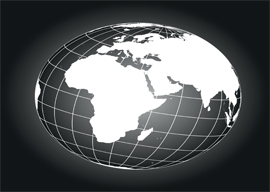 Remarkably, European solidarity, once the progressive cause par excellence, is increasingly viewed as hateful racism, as suggested by the conventional wisdom’s berserk reaction to President Trump’s speech last week in Warsaw in praise of the people of Poland and of the Western civilization of which they are a part.

For example, Slate, The Atlantic, The New Republic, and Salon all declared Trump’s Poland speech to be white nationalist.

Once again, Trump’s historical role appears to be to act as a catalyst accelerating existing trends, inciting his enemies to declare what’s really been on their minds all along. Thus, even cohesion in Western Europe, which is favored by Trump’s Polish hosts, is now viewed as a racist plot against People of Color, denying them their rightful right to migrate en masse to Europe.

Recently, it has become commonplace for sophisticated observers to argue that the old political polarities of left and right are no longer relevant. For instance, Thomas Edsall writes in The New York Times:

Ewald Engelen, a social scientist at the University of Amsterdam, argues that the old paradigm of a left arguing for strong government intervention and a right preferring market solutions to social problems has been replaced. “Today,” he told Al Jazeera, “we see that the dominant dichotomy has become globalism versus nationalism.”

“The logic of concentricism is so obvious that it’s almost never articulated anymore.”

It’s widely assumed that nationalism is the driving force in this newly dominant dichotomy, but the contortions of nationalist Brexit advocates to fit their arguments within the narrow parameters of acceptableness to the media suggest instead that the globalists hold the ideological whip hand.

For example, the United Kingdom Independence Party made the argument that Britain is plagued by too much immigration from Poland and should instead turn for immigrants to the old Commonwealth countries, such as, well, Pakistan, which had already brought them the Rotherham pimps.

But with such a huge advantage in the terms of discourse, why do the globalists ever lose, as they did in Britain and America in 2016?

One big reason: As the strident reaction of mainstream pundits in the West to Trump’s speech makes clear, the globalist dogma has become increasingly extreme. Antinationalist ideology is in the grips of a purity spiral resembling Salem in 1692.

For example, the new golden boy of globalism, blank-screen French president Emmanuel Macron, dismayed his American enthusiasts this week by merely mentioning the extremely high fertility in some African countries.

The gravest threat to Europeans is, of course, the enormous growth in population in Africa and the Middle East, which is now spilling across the Mediterranean. 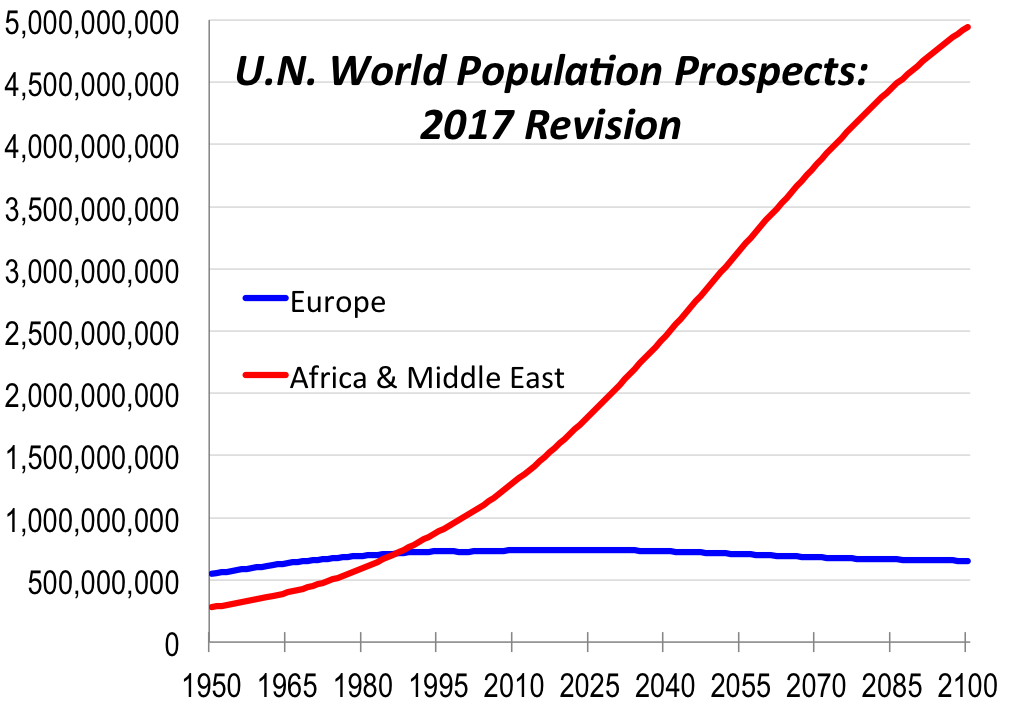 Back in 1950, Africa and the Middle East were relatively unpopulated; combined they had only half the population of Europe. By thirty years ago, they were equal in numbers. Today, the population of Africa/Middle East is twice that of Europe, and by 2050, according to last month’s projections by the U.N., they will outnumber Europeans four to one. By 2100, the ratio might approach eight to one.

Of course, overpopulation in Africa and the Middle East would lead to ever more tens or hundreds or thousands of millions of migrants attempting to penetrate Europe.

At present, however, Europeans are sending out ships to tow the huddled masses across the Mediterranean. How can Europe avoid winding up like Detroit writ large without organizing a perimeter defense? But Europeans can”t muster the will for self-preservation without developing some continental self-respect: the idea, now largely forbidden, that they deserve their own continent.

What’s striking about the ascendancy among the respectable classes of globalist fanaticism is how forgotten has become the middle ground between nationalism and globalism of continentalism.

The word “continentalist” barely exists today, even though what is now the European Union was founded on the lost notion that Europeans ought to be more neighborly toward one another than they are toward the rest of the world.

Thus, Current Year commentators were aghast at his racism when Macron argued against a “Marshall Plan for Africa,” pointing out:

The Marshall plan was a reconstruction plan, a material plan in a region that already had its equilibriums, its borders and its stability. The problems Africa face are completely different and are much different and are “civilizational.”

So let me briefly make the case for continentalism. Europe’s not my continent, so I don”t have particularly strong views on how Europeans ought to arrange their affairs. But what is interesting is how unthinkable the arguments for Europeans favoring Europeans have become.

The basic idea behind concentric degrees of territorial neighborliness is that you have more to gain from trade with those close to you and more to lose from violent conflict with them simply because, for good or bad, you can get at your neighbors more easily than you can the people on other continents.

Similarly, you are probably better able to get along politically with those nearby than with those on the far side of the world because you have more in common with your neighbors. For example, the vast intercontinental empires of a century ago are nearly all gone, with only a handful of noncontiguous territories, such as French Tahiti and American Samoa, still controlled from an imperial capital.

The logic of concentricism is so obvious that it’s almost never articulated anymore. If you look at people in Peru, Manchuria, or Chad, you’ll notice that they tend to feel the most duties and allegiances toward those whom they consider most like themselves, moderate amounts toward those moderately close to them, and so forth outward and onward.

Instead, we now celebrate the anti-logic of leapfrogging loyalties.

The Western liberal is noteworthy for feeling loyalty toward his inner circle, then leapfrogging over a whole bunch of folks who are kind of like him but whom he more or less despises, in order to embrace The Other.