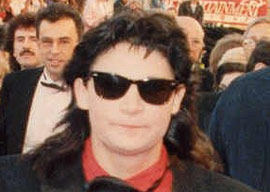 As legions of Hollywood actresses step forth with lurid allegations against snub-nosed hedgehog Harvey Weinstein and others over their serial abuse of the casting couch, can a wave of pedophilia accusations against entertainment execs be that far behind?

I once made eye contact with 1980s teen idol Corey Feldman, and there was a deeply warped madness in his eyes. This was around 2003 or so at a club in Portland where I worked as a bouncer, and as I strode by the stage, Corey was dressed in some floppy Cat in the Hat suit…fronting some ludicrous band…and doing ridiculous herky-jerky robot/ninja moves…and he looked straight at me. His eyes were like two large black dots that extended backward into a bottomless void. I’m trying to think if anyone’s eyes ever looked crazier to me, and for the moment I’m drawing blanks.

That one creepy moment of eye contact—plus the fact that everything he’s done as an adult is so absolutely mental that I don’t know whether to mock him or feel sorry for him—makes me believe all his allegations of being tossed around as a pedo plaything during his movie days are 100% true.

On Friday, Feldman—considered by many to be Hollywood’s top male teen movie star of the 1980s—was allegedly arrested on suspicion of marijuana possession before a show at a bar in Louisiana.

“Can a wave of pedophilia accusations against entertainment execs be that far behind?”

This was only a day after Feldman went on the following all-caps Twitter rampage:

4 THE RECORD: I WILL NOT B GOING ON A TALK SHOW 2 DISCLOSE NAMES OF MY ABUSER OR ANY1 ELSES ABUSERS. SO PLEASE STOP ASKING ME 2 DO SO…THAT SAID I AM WORKING ON A PLAN THAT MAY B A WAY FORWARD 2 SHED SOME LITE ON THIS SITUATION! IF I CAN FIGURE OUT A WAY 2 GET ACTUAL JUSTICE…NOBODY SHOULD LIV THEIR LIVES IN FEAR EXCEPT THOSE WHO COMMITTED THESE HEINOUS CRIMES IN THE 1ST PLACE!

In 1993 at age 22, Feldman was interviewed by sheriff’s deputies in Santa Barbara, CA regarding pedophilia allegations against Michael Jackson, who was a close friend with Feldman years earlier but who Feldman claims was one of the few close Hollywood associates who didn’t diddle him. Feldman says he told the deputies that he specifically named four men who’d molested him repeatedly in Hollywood when he was underage, but the police did “zero” and let the statute of limitations run out.

In 2012 Feldman told a British newspaper:

When I was 14 and 15, things were happening to me. These older men were leching around like vultures. It was basically me lying there pretending I was asleep and them going about their business.

In 2013 on yenta squawkfest The View, a tense and emotionally beaten Feldman told Barbara Walters and her sob sisters that Hollywood execs had repeatedly abused him and his co-teen idol Corey Haim:

I’m saying….the people that did this to both me and Corey, that are still working, they’re still out there and they’re some of the richest, most powerful people in this business. And they do not want me saying what I’m saying right now.

Instead of extending sympathy, Walters chastised him: “You’re damaging an entire industry!”

Last year Feldman explained to the Hollywood Reporter why he couldn’t name his abusers:

I would love to name names. I’d love to be the first to do it. But unfortunately California conveniently enough has a statute of limitations that prevents that from happening. Because if I were to go and mention anybody’s name I would be the one that would be in legal problems and I’m the one that would be sued….If somebody came forward with a suit against one of these people [who molested me], I would certainly be more than happy to back them up. But that hasn’t happened.

Feldman says he was molested but never raped. He adds that his 80s teen-idol friend and costar in seven films Corey Haim wasn’t so lucky. After their time in the teen spotlight, both Feldman and Haim spiraled down into crack and heroin abuse. In 2010, Haim—who at one point had ballooned to over 300 pounds and had been in rehab fifteen times—died of complications from pneumonia.

Feldman seems to feel that Hollywood killed him.

Although mostly unknown to fans of Tinseltown, there have already been several pedophilia convictions of grown men who swarm like flies around underage perfomers.