The Cold Civil War Grinds On 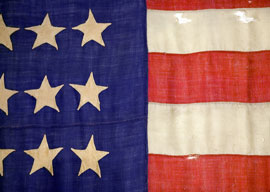 Back in January I drew some parallels between the Civil War whose 150th anniversary is upon us and the lesser conflicts that disturb our domestic peace nowadays. I quoted Senator Mason describing the former as “a war of sentiment and opinion by one form of society against another form of society.” I argued that our present-day wranglings over issues such as gun control, homosexual marriage, immigration, and race are a continuation of that “war of sentiment and opinion” by other means. Call it the Cold Civil War.

Here are some recent battles and skirmishes in the Cold Civil War.

Immigration. This is the big one”the Gettysburg of the conflict. If conservatives lose this one, we shall eventually lose the war, though it will take longer than the 21 months from Gettysburg to Appomattox.

In my January piece, I described the combatants as “two big groups of white people who can”t stand the sight of each other.” That gets most of it, but the liberal elites who control the commanding heights in our culture”the Tutsis in our Tutsi-Hutu sectional conflict”willingly open their ranks to blacks and Hispanics who share their values. A Barack Obama, a Vernon Jordan, and a Sonia Sotomayor can be elevated to elite status.

“To keep non-elite blacks happy in clientage, their Designated Victim status has to be affirmed from time to time.”

The passive voice is indispensable there, though. This elevation is something that happens to selected nonwhites because white elites want it to.

The other party to the conflict, the patriotic conservatives”the Hutus”are pretty solidly white. Their ancestors were the founding American population, mostly from Britain, supplemented by the pre-WWI European immigrants.

If you subtract out the Tutsi elites and their hangers-on and postulants, who are about 30 percent of the population, and the Hutu whites, who are about 45 percent, you are left with 25 percent non-elite blacks and Hispanics, whose status is essentially that of Tutsi clients. That is, they can be farmed for votes to support elite projects, receiving in return welfare benefits, government jobs, “affirmative action” preferences, and Designated Victim status.

The elites” aim in the current immigration skirmish is to diminish the second percentage by increasing the third.

Since the welfare and preferences are paid for in part by taxes on Hutus, and since the work of blacks and Hispanics doesn”t create much value, the long-term outcome of this strategy is problematic. The thrill of outwitting and crushing the hated, despised Hutus is, however, great enough to banish thoughts of the long-term from Tutsi minds.

Paula Deen. If you”re still not clear about my usage of “Hutu” here, check out Ms. Deen. The Southern accent; the fried-lard recipes; the tan-from-a-bottle; the heartfelt Christianity; the embonpoint; the teary, I-have-sinned-and-beg-forgiveness apology”Ms. Deen is as Hutu as the Talladega infield.

The lady lost her TV show and product endorsements because she admitted in a court deposition to having said “nigger.” Tutsis don”t say “nigger.” Low-class blacks say it a lot, but nobody cares about that so long as they show up at the polls to vote for Tutsi candidates.

This is a much smaller thing than the immigration struggle”a mere skirmish. It does, though, illustrate elite values” complete dominance in the media and in business, as well as the glee with which elites humiliate Hutus who step out of line.

George Zimmerman. To keep non-elite blacks happy in clientage, their Designated Victim status has to be affirmed from time to time. The psychic satisfactions of that status are very sweet; so much so that when the white Hutus fail to live up to their duties as oppressors, incidents have to be fabricated.