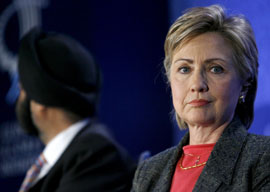 One of modern life’s great canards is that women were historically shut out of the workplace. Yet from Hollywood to London, there have long been prominent ladies in the office if they wanted to be there. Many did not, choosing to raise families when sole income made that choice possible.

Most of my professional career has been spent working closely with or for powerful women. One lady in particular was intelligent, tough, and merciless upon her opponents. She was effective because she always cast herself a politician who was a woman and not a woman who was a politician. There is a profound difference.

Consequently she had a steely constitution, a formidable reputation, and she earned longevity in politics. Also, she kept a list.

Enemies lists have taken on a particularly negative connotation in recent years, especially after Nixon. However, I know of scarcely any serious political figure that doesn’t keep an enemies list in the bottom of some desk drawer.

Far from being a drag on efficiency, a well-made and logically justified enemies list often greases the wheels of bureaucracy. Much like an unspoken code of chivalry, if everyone records a tally everyone else knows not to cross certain boundaries.

“I know of scarcely any serious political figure that doesn”t keep an enemies list in the bottom of some desk drawer.”

The problem arises from those who abuse the privilege. For example, Director Hoover leveraging tapes of Martin Luther King’s extramarital carryings-on to ensure he remained nonviolent and publicly anticommunist was socially beneficial. However, Clinton’s use of the Internal Revenue Service to target critics was distasteful. One was a nudge to keep the populace relatively peaceful, while the other was rankly stomping out dissent.

Enemies lists are all about nuance.

This is important at present because from numerous outward indications Congress is preparing to cede America to between 10 and 30 million illegal invaders. The main quandary for Boehner and his Benedict Arnolds seems to be how to spin this total surrender to the citizens without causing a revolt within his own party and possibly the country.

Knowing politics, it wouldn’t surprise me to see “Listening (Speaking) Tours” for Representatives and Senators to return home to harangue the peons that they are racist, classist, elitist, nativist, or some newly invented “-ist” if they oppose their own displacement.

There is a large block of “State Work Period” (i.e., Chicken Dinner Circuit) time set aside the third and fourth weeks of April in both deliberative bodies. This very well may be when they attempt to sell us into selling out our homeland’s soul.

The timing could be dependent on whether analysts believe extended discussions Ã  la Obamacare are preferable to the 1913 Federal Reserve-style rush-through. Will ignoring voters to their face raise more ire than blithely acting as if voters don’t exist?