The Difference Between White People and Black People 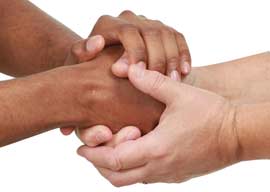 Imagine for a moment that you are an intelligent and self-sufficient Martian living in a plush, temperature-controlled trailer home somewhere amid the vast frozen plains of that lonely red planet. Also imagine that through the miracle of advanced Martian technology, you have Internet access”it could even be AOL, it doesn”t really matter. Let’s also pretend that your curious, veiny, overdeveloped Martian brain, despite its better instincts, has become fascinated with those foolish simian earthling humanoids, particularly the “white people” and “black people” who inhabit what will be known for a little while longer as the United States of America.

Since you are a Martian, you have no childishly naÃ¯ve prejudices”nor any meticulously acquired adult postjudices”about frivolities such as “racism” or “injustice” or “equality.” You merely want to know the difference between white people and black people, and to keep it “relevant” as the teen earthlings are fond of saying, you confine your search to the prior week’s news. You search the phrases “white people” and “black people” over the preceding seven Earth days.

What would you learn?

You would learn that white people are a uniquely self-loathing breed who not only openly question whether they can be trusted”they come right out and say they can’t be trusted.

They blame themselves rather than blacks for the ceaseless black-white evolutionary conflict that white earthlings self-deprecatingly refer to as “racism.” They chide other white people for not allowing black people to constantly lecture them. They encourage double standards that claim it’s “racist” and harmful when white people wear blackface but entirely benign when black people dress in whiteface.

Turning the former slave master’s whip upon their own kind, they constantly flog themselves over a past when they acted in collective self-interest rather than collective self-denial, and somehow they see this as virtuous and bold rather than masochistic and pathetic. They manage to view it as a sign of progress rather than decline. They’re a strange alien breed, indeed.

They revel in lampooning their own supposed cultural awkwardness, in using the word “whitest“ as a pejorative, and in constantly claiming that whites are continually “stealing” and “appropriating” things from blacks”inane and ultimately insubstantial things such as a fondness for large posteriors, since apparently there isn’t much in the way of true scientific innovations to appropriate.

They love when black people make fun of them and perpetually chide them for racism and call them “crazy“ and “jokingly“ rub racial double standards right in their faces. They even think it’s cute and adorable when self-loathing white radicals gather black kids from a dysfunctional war zone together to film a video mocking white people for their cluelessness. They especially enjoy it when black people, no matter how openly resentful and hate-filled they are toward whites, piously claim that it’s impossible for blacks to be racist.

OK, then, what would a curious Martian’s quick Internet search of the past week tell them about black people?

The eager, fact-seeking Martian would learn that white people have historically hated black people and have conditioned them to hate themselves. Life has been unfair and oppressive for black people ever since being kidnapped from their homeland, despite the fact that by most measures of living standards such as longevity and yearly income and access to medical care, it is far better in America for them than it is back in their homeland.

Black people face racism and hatred everywhere they turn, whether it comes to dating, interacting with police, being terrorized by the state, being subjected to a war of occupation by the demon sons of Yacub, or allowing record companies to wage an ongoing campaign of genocide against them. Even millionaire female athletes still have to slog through the occasional racist remark.