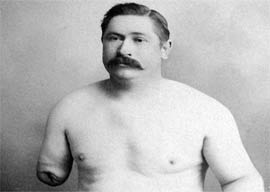 While mainstream pop culture and institutional academia busy themselves celebrating and sprinkling glittered confetti upon the “transgendered””a group that mainly seems to consist of men with deep voices and penises who insist that they’re women”there’s another oppressed minority group based on a delusional identity that is getting completely ignored, which really sucks because it only adds to their oppression.

These hapless victims of the dominant white supremacist male patriarchal privileged power structure call themselves “transabled.” By and large they see themselves as amputees who just happened to have been accidentally born in bodies with four functional limbs. It’s kinda the inverse of phantom limb syndrome”rather than imagining a limb that isn’t there, they insist that a real flesh-and-blood limb shouldn’t be there.

It’s sort of like being transgendered, but rather than being men who claim that they are really women, these people are perfectly ambulatory yet insist that their natural state involves being crippled or otherwise hobbled.

Psychologists”for the time being, at least”refer to the “transabled” phenomenon not as a political identity but as a mental illness. They call it Body Integrity Identity Disorder (BIID).

Body Integrity Identity Disorder (BIID) is a rare condition in which persons typically report an intense desire either to be paralyzed or to have one or more of their healthy limbs to be amputated.

“It’s kinda the inverse of phantom limb syndrome”rather than imagining a limb that isn’t there, they insist that a real flesh-and-blood limb shouldn’t be there.”

Transabled people wish to become deaf, blind, have limbs amputated, or acquire other disabilities. Driven by this desire, a significant number effect these transitions themselves using firearms, deep burns, and other methods.

Although limb amputation is the disability of choice, the transabled have also been known to covet other disabling conditions such as deafness and blindness. Some even desire to acquire HIV. Others yearn to become permanently incontinent. For what it’s worth, the ranks of the transabled are overwhelmingly white, male, and disproportionately homosexual”not that there’s anything wrong with it.

In a 2008 interview, a guy who uses the pseudonym “One Hand Jason” rhapsodized about how he achieved inner peace by cutting off his hand:

I staged an accident….I don”t want to be hugely specific, but I used a very sharp power tool, after having tried out different methods of crushing and cutting….I feel like my body is correct at last, and that’s a way cool feeling.

On the now-defunct site transabled.org, a man who called himself “Woodie” described how he had to radically alter his real body in order to, you know, become his true self:

This wasn”t about losing a leg, it was about gaining my own sense of self.

A female research scientist in Utah told the Huffington Post about her unquenchable desire to become paralyzed. She insists her urge is sincere and not just some desperate plea for attention:

Nobody would make this up. That would be nuts.

The most cogent hypothesis regarding BIID I’ve seen is that the brain’s body-mapping function somehow fails to account for the “offending limb” and considers it alien. This leads to inescapable urges to have the limb removed”and reporting tremendous relief once it is.

At least that explanation is neurological rather than ideological and could potentially be quantified one day. And it sidesteps the jet stream of cerebral diarrhea you hear from queer-theory Cultural Marxists who’ve hijacked this mental disorder and refashioned it into an oppressed social grievance group that will inevitably demand publicly funded amputation clinics.  In their mania to deconstruct everything”especially common sense”they politicize a mental disorder to the point where the explanation is ten times as insane as the original condition. When they start yipping about disability hierarchies and safe spaces and problematic heteronormative perspectives, my bullshit alarms start going off loud enough to shatter my eardrums.

Chew on this, for example:

Following anti-oppression theories on the importance of the subject’s position, I self-identity as a disabled, bisexual, transsexual man….Some anti-ableist activists have yet to deconstruct their own cis* privileges.

I HATE it when anti-ableist activists fail to deconstruct their own cis* privileges”especially when all you want to do is saw off your own arm!