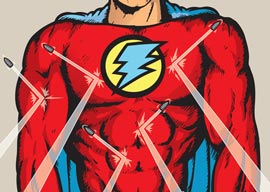 No one plays “follow the leader” better than leftists; no one can mindlessly copy talking points like they do. It’s one of the reasons liberals excel in academia and Hollywood, two industries in which imitation is rewarded and independent thought punished. Mindless aping exists among conservatives, too, but leftists really know how to make an art form out of it.

Case in point: In the days following the terrorist atrocities in Paris, the “great minds” on the left robotically repeated the same mantra over and over again””Stop blaming Muslims! White Christians kill people too!” In far too many op-eds and posts to link to here, the talking point was repeated with very little deviation. “Let’s stop talking about “Muslim terror,” because whites and Christians have done bad things over the ages, and look at mass shooters in the U.S.! They”re usually white dudes! But we don”t smear all white Christians as terrorists. What racist, Islamophobic, intolerant hypocrites we are!”

This “argument” has become purely reflexive on the part of leftists. They repeat it because it allows them to steer clear of unsafe or challenging subject matter. It’s the perfect deflection, allowing leftists to avoid having to address the pathology of Muslim terror, because they convince themselves that there is no pathology that needs addressing. You can”t “ignore” a problem that doesn”t exist!

As deflections go, this is a very effective one. Hence its popularity.

A disproportionate number of these “white Christians are just as bad” pieces can be found at Salon.com, and that’s hardly surprising considering what that site has become. Salon is a high-volume outlet for completely forgettable, simpleminded polemics. Essentially, Salon is the home of the 1,200-word tweet. Salon isn”t the place for thought-provoking, detailed discussions; it’s where leftists go to make the kind of simplistic declarations that the average person reserves for Twitter (“So-and-so thing is sexist, y”all; stop doing it.” “So-and-so word is racist, y”all; stop using it”), but fleshed out so as to appear more profound than a mere tweet, in a forum more “serious” than Twitter.

“The left’s deflection of any discussion of Islamic pathology must be seen in context: This is how the left deals with all issues it doesn”t want to discuss.”

Due to the hit-and-run nature of most Salon pieces, it’s frustratingly hard to get Salon authors to defend their work. I tried, unsuccessfully, to correspond with a half-dozen of the “white Christians are worse terrorists” authors. I merely wanted to ask them a few questions, but none of them wanted any part of it. Finally, one of them took up my challenge: Mark Sundeen, known for his “ironic hipster travelogues” (I never knew there was such a genre). Sundeen has built a literary career on being a slacker, and even his author’s page on the Simon & Schuster website admits he’s “not even a particularly good reporter.” Still and all, Salon ran his purposely inflammatory piece of “satire,” “Let’s Deport the White Males:”

In a very unenthusiastic review of one of Sundeen’s “hipster travelogues,” Anthony Bourdain, writing in The New York Times, slammed the author’s writing style: “The irony is laid on too thick”and far too relentlessly.” No shit; you don”t say.

The only thing more smug than Sundeen’s “satire” is his defense of it on his Facebook page. He admits that he invented the “white male Protestant” description for several of the murderers he listed, but no correction is needed because…satire! He complains that his critics are angry because his piece “cut so close to the bone on whiteness and terrorism,” as opposed to them being angry because it’s inaccurate and poorly written.

Due to his longtime friendship with my publisher, Sundeen enthusiastically agreed to answer my questions, so I sent them to him:

(1) Do you think it’s wise to conflate or confuse ideological crimes with non-ideological ones? [I asked this because many of the incidents Sundeen cited had no ideological underpinnings, whereas all jihadi crimes, by definition, do.]

(2) The Pew polling organization, which conducts routine surveys of Muslim opinion, found that 35% of French Muslims support, to one degree or another, “suicide bombing of civilian targets to defend Islam” (42% among those under 30 years of age). Do you know of any polling data from any legitimate polling organization that shows similar figures regarding “white male Protestant” support for any of the mass shootings you listed in your Salon piece?