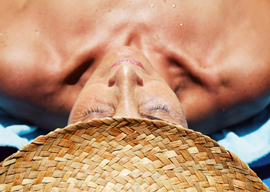 The Germans may or may not have preferred to march in the shade, but the French proclivity for lolling topless in the sun is no chauvinistic joke.

Right after the first female doffed her bikini bra in 1960s Saint Tropez, such exhibitionism became a point of naked national pride. The smug French love contrasting their relaxed attitudes about public nudity with the supposed prudery of Americans, who”just a friendly reminder”saved their asses (and tits) during World War II.

(That’s the thanks Yanks get for bleeding all over a few of their ally’s less inviting beaches. From enemy lines to enemy tan lines in one generation, and with no help from “topless” French females of another kind, either.)

It’s tempting to snark that, had those temperature-controlled Nazis been victorious, the monokini fad would never have, as it were, taken off. Au contraire! Rudi Gernreich, the (cough) Austrian-born clothing designer who created the topless swimsuit in 1963, likes to say that, as a teenager, “he had fled the country with his family to escape Hitler, who had banned nudity.”

“As for the old ones”wasn”t it Sartre who declared that hell is other people’s saggy jugs?”

You see, “many Austrians … were big proponents of exercising and frolicking in the buff,” and Gernreich “regarded any action against bearing [sic] it all as fascist and oppressive.”

Uh huh. Those of you who aren”t already smirking knowingly should check out a 2011 Der Spiegel exposÃ© called “Naked Nazis.”

Thing is, the 1936 edition of Hans SurÃ©n’s Humans and Sun“”a collection of nude photographs that includes lyrical praise of the male member, instructions for yoga-like exercises and even naked skiing””was one of the Third Reich’s best sellers.

The im Haus SS rag Das Schwarze Korps promoted the tome as an ideal Yuletide gift; it was even “protected as official party literature.”

And who were among the biggest boosters of bare beach boobs in 21st-century France? Why, the “far right” National Front, who not too long ago put out an anti-immigration poster contrasting topless bathers with women in burqas.

And whose name is inevitably invoked as the girl who started it all? Brigitte Bardot, a high-profile Lepenist.

Since the Left is forever hunting down fresh nouns to denounce, I”m surprised they haven”t gotten around to (seriously) condemning seminude sunning as right-wing by association, during one of their regular fits of Chomskyesque anti-corporate Hugo Bossyness.

Instead, topless sunbathing is on the decline, and those “progressive” human toothaches have, for once, nothing to do with it.