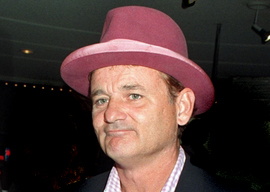 If your finger’s on the pulse of the Internet, you know that Bill Murray is adored by everyone born after 1976. We love him not just for his carefree, arrogant movie persona but for how this persona seems to spill over into his real life. The actor has become infamous for showing up at random parties and bars and gracing the scene with an air of “just not caring,” as a blogger might say. This is also known as “not giving a fuck.”

And that’s only what gets reported. Since I moved to New York, Murray’s playground of choice, I”ve met people who”ve met people who”ve been at a Murray-adorned party. The refrain goes something like, “We were at this house party in Brooklyn, and Bill Murray just showed up, drank a few beers, helped us do the dishes, danced around a little, and then left as mysteriously as he arrived.”

Bill Murray is charming, but charm’s dirty secret is that it usually belies something that’s not so charming. The etymology of “charm“ suggests that its only a temporary cover-up, albeit a mature, healthy one. So it makes me wonder if Murray is like Al Pacino in Scent of a Woman“giving it one last hurrah before sucking on a gun.

“Bill Murray is charming, but charm’s dirty secret is that it usually belies something that’s not so charming.”

I wonder this partly because Murray’s new “let me make a spectacle out of myself” marketing campaign only started in 2008, when his marriage ended. More specifically, his wife left him, accusing Murray of drug addiction, infidelity, and domestic violence. Now he’s estranged from some of his children. How fun!

Once upon a time, however, Bill Murray was a serious man. I”m not talking about his recent stream of indie hits since Lost in Translation which mistake unfunny for serious. Murray only agreed to do Ghostbusters because Columbia Pictures funded his pet project The Razor’s Edge, a film specifically about a young man who begins to take life seriously. The film reflected a turning point in Murray’s life. In his early 30s he got into literature and began to paint. He eschewed empty irreverence and put it on himself to really think about himself and life. In the film when Murray’s character tells his fiancÃ©e, “I want to think. I need to think. And that’s something I don”t have much practice with,” he’s just as much talking about himself as his character.

Maybe this seriousness didn”t last because it was only a phase. Like Murray’s character in the film, Murray only became serious after his friend John Belushi died. Murray basically recites the same eulogy in the film as he did at Belushi’s funeral.