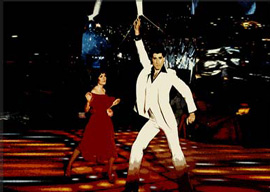 Ever since Canadian English professor Marshall McLuhan coined the term “the medium is the message” in 1964, it’s been fun (if not particularly taxing) for intellectuals to speculate about how new communication technologies influence content. One of the most perceptive observers of today’s proliferating digital channels’ subtle effects is The New York Times’ Virginia Heffernan.

Of course, if writers could predict the future of communications, they’d all be Zuckerbergian billionaire entrepreneurs. So Heffernan is at her best in retrospect, such as in her lovely essay last year about the superb sound quality we enjoyed a generation ago on our old-fashioned analog landline telephones. In contrast, having grown up on crummy-sounding cell phones, she says it’s no wonder that today’s youth prefer to text.

Over the weekend, Heffernan baffled a number of her readers by agreeing with “cultural critic” Emily Nussbaum’s Tweet about how “SOCIAL MEDIA IS DISCO.” In other words, the Internet tools such as Twitter and Facebook that have flourished over the last half-decade resemble the 1970s’ disco music by similarly appealing more to “women, gay people, and nonwhite people.”

“If you’ve ever observed a Wikipedia Editors Meetup, you can see why they don’t get together more often.”

Heffernan has a point. Disco was fun and functional, in contrast to the epic ambitions of white male rock. I can still recall how in 1977 my cousin, a USC sorority girl, rolled her eyes when I excitedly asked her how much she’d liked the three-hour Led Zeppelin concert—including twenty-seven minutes of “Dazed and Confused”—to which her date had treated her.

As Tom Wolfe scoffed in 1979, although white women were the chief purchasers of disco music and blacks were often presented as disco artistry’s public face, a visit to Studio 54 suggested who was really behind the fad:

Hundreds of young males may be seen dancing with one another to flashing lights and recorded music in a homoerotic frenzy, while prominent citizens…look on, apparently greatly stimulated by the…“disco fever.”

You can see why the average black guy would be sore about gullible white folks blaming him for disco. I’m not sure blacks have ever quite forgiven whites for this misperception. That may help explain how quickly blacks invented rap to replace disco and how adamantly they’ve clung ever since to hip-hop’s lunkheaded but unimpeachable masculinity.

What are Internet social media’s demographics?