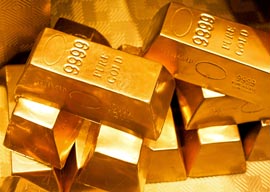 Precious-metals expert Ned Naylor-Leyland is an investment manager at Quilter Cheviot, London, who frequently comments on the subject via the international TV-news networks of the less mainstream variety. Ned’s professional position has been in favor of buying gold since before gold became an appeal, (even briefly) a growth asset class, once again, in the second half of the “00s. Certainly Ned was researching the situation since before gold’s decadelong rally began”moving from $300 in 2002 to a peak of $1,750 in 2012. Despite the decline of gold’s spot price in the past few years, Ned’s as bullish about gold as ever, possibly even more so. Why?

A colleague of Ned’s, Jan Skoyles”CEO of The Real Asset Co. (TRAC)”explains her own love affair with gold (and silver): “Ned and I started discussing potential topics for my dissertation…. Ned suggested I do it on precious metals, and quickly drew one of his manic diagrams, showing me the role of money over the last 1,000 years”which I seem to remember started with Christ. That was how it all started off,” says Skoyles, somewhat cutely, of her enduring love for yellow bricks. She points out that it was the role of precious metals in the monetary system, over time, that got her intellect hooked on the future potential of gold. See, gold may yet return to the major leagues, in yet another repeat of history, this time precipitated by a monetary crisis. The gold play depends on a sea change occurring in the world economy, and on its timing; and the rest is easy. Stay with me and you”ll soon see why.

Skoyles is one of many gold believers, a.k.a. goldbugs, infected by the sheer enthusiasm of “resident expert” Naylor-Leyland (N-L). The passion fueling his personal evangelism stems from a core idea, first of all, that “there isn”t just one form of economics.” N-L feels sufficiently strongly about this point to repeat it.

“The financial system has become very homogenized,” N-L said early in 2015. “But there isn”t just one form of economics. The current model is based on a deficit spending model that governments rely on”it doesn”t mean it is right, or that it’s the only option.”

So why does gold matter to the noninstitutional investor?

“Gold may yet return to the major leagues, in yet another repeat of history, this time precipitated by a monetary crisis.”

Quilter Cheviot published a kind of manifesto in 2015 that squarely answers the question while clearly articulating the investment opportunity for the uninitiated like myself. The following is a paraphrase of the whole document. Direct quotations are included as and when they reveal key selling points of gold. The same goes for any crucial factors regarding gold’s potential as a benchmark or standard in the future monetary system or global economy, when China will most likely take the lead where previously the USA took the leadership initiative.

So here it is. The case for investing in gold:

Discovered by the Egyptians in 3500 BC, gold”as well as its sister metal, silver”has consistently been of great desire to humans. With their scarcity value, both materials have remained in constant demand. However: “Unlike ordinary money, which has its worth determined by the markets, gold is something [tangible]. It has limited counterparty risk [i.e., of a default] and its value can never go to zero.

“While demand for gold might be accelerating, especially in countries such as China, India and Russia, the volume of newly discovered gold has reached a record low. For example, during the 1990s approximately 100 million ounces of gold was discovered annually. In the past 10 years, this has reduced to just 30 million ounces. The fact that the “easy” gold has already been mined, allied with rising production costs means that “new” gold is harder to come by”an obvious formula for higher prices in the future.”

Scarcity on the supply side has not diminished the demand for gold, above all in the Asian markets. China and India together represented 23% of world gold demand in 2002. By 2012 the gold demand from India and China combined had more than doubled, to 47%. Today, all the gold mined each week across the globe is being withdrawn, in bullion bar form, in Shanghai”a remarkable trend indeed.

This strong demand is reinforced by the growth of the middle classes all across Asia, a development still in its early stages. According to the Wolfensohn Centre for Development, China’s middle class will reach 670 million by 2021″double the number of the entire U.S. population. The Economic Times predicts, meanwhile, that the middle class in India could reach 267 million by 2016. These middle-class growth numbers are of interest not only because of what they tell us about the shift of global wealth from West to East but also in what it means for the world’s gold markets and how they may develop in the future.

N-L argues that the increasing popularity of gold”certainly in China’s case”may be a sign that the precious metal is beginning to be reintegrated* into the monetary system in a more formal way (by the Chinese authorities).

[*The gold standard is a monetary system where a country’s currency or paper money has a value directly linked to gold. This was the case historically in most nations until they abandoned the standard at various points in the 20th century.]

N-L clarifies today’s market situation: “Up to 2008 you could not buy gold in China”it was outlawed. There are now over 100,000 bullion outlets in China. This may be a coincidence, but when you consider that they are the major creditor nation and they are putting gold in the hands of the public”through the equivalent of a “help to buy” program for gold, rather like the one we have for property here”one has to wonder if there is actually something much more significant going on?

“There are many who are tempted to ignore this trend”and say that it’s an anachronism and will have no impact on investors in the West”but we must remember that we are the debtors. The creditor nations seem to be taking a different view here, and are incentivizing the ownership of gold by the public as a hedge against the dollar,” N-L concludes. It’s clear which trend he’s backing anyway. (And it’s not property “help to buy.”)

More recently on television, while reminding viewers that gold is not a growth class, N-L advised investors to buy gold and silver “as an insurance policy…” Insurance against what, though?

Property, for one thing”as N-L explained it”is a debt-backed asset class, whether or not you own your house. Given that a large-scale debt crisis is widely expected to cause the next banking crisis, it’s even more important to hold gold as a hedge against all the other fluctuating markets, he says”implying the debt-backed markets especially, where the risk of the ground falling out beneath your feet always remains, as does the systemic risk.