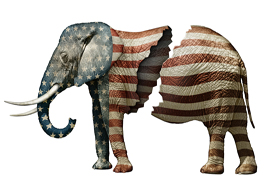 I”ve taken a lot of shots at Trump this election season, and there’s really no need for me to pile on now. Hell, when your own VP admits that he’s ashamed of you, c”mon…it doesn”t take ol” Dave Cole to point out that there’s trouble in River City. We know by now that there are essentially two types of Republicans and conservatives who don”t and won”t support The Donald. There are the ones afflicted with integrity, the ones who simply can”t support a man who doesn”t reflect their principles. We can “yay” or “boo” such people all day long, but speaking for myself, I know some very decent, principled conservatives who sincerely believe that Trump is the opposite of a good GOP candidate. It doesn”t mean these folks support Hillary; it just means they don”t support Trump, and I can”t condemn someone for adhering to principles.

Then there are the anti-Trump dunderheads, the people like my fellow Hebraic Lollipop Guildian Ben Shapiro. These clods have bought the leftist line that Trump is “literally Hitler.” They genuinely believe that a guy who’s never had a problem with Jews in his entire life is now planning to genocide them for reasons yet to be determined. These guys Nevertrump for reasons that are moronic, self-indulgent, and tribalist.

In the same vein, I think we can group the Republicans and conservatives who are currently abandoning the SS Trump into two similar categories. There are the ones who, perhaps against their better judgment, had decided to give the man a chance, owing no doubt to the fact that Hillary is the pantsuited personification of corruption, duplicity, and sleaziness. These people held their noses and decided to take one for the team (“the team” being either the GOP or the U.S.). But the whole “pussy grabber” thing was a final straw, and those folks are now saying, “I”m done supporting a vulgar, unpresidential buffoon on his voyage of self- and party destruction. Let’s get the defeat over with and start rebuilding, but until then I just can”t fake the cheerleading anymore.” How did Gerry Beckley put it (in a completely different context)? “Well, I tried to fake it, I don”t mind sayin”, I just can”t make it.” I get it. Whether or not I agree is immaterial. I understand that point of view, and I respect it.

“The GOP will for a generation be the Grabbers Of Pussy.”

But then there are the GOPs/conservatives (by and large, pundits and elected officials) who think that by making a big public show of abandoning Trump following the pussy-grab revelations, they are somehow currying favor with the left, preserving for themselves a future free of accusations of “You”re a pro-rape misogynist Nazi.” These are the career- and image-obsessed divas who have specifically chosen this moment to make their grand exit because they believe that by doing so, their sworn enemies”the people openly engaged in a war of ideological extermination against them”will give them “props” and muster the integrity to say, “I might disagree with you on policy, but by Jove you”re not a racist misogynist cacodemon and I shall spar with you respectfully, acknowledging that even though we may have opposing ideas, you are not a monster.”

It never ceases to amaze me that there are still people on the right who genuinely think the left cares about subtleties and gray areas. Regardless of a mountain of evidence to the contrary, some conservatives continue to adhere to the myth that they can buy their way out of the race- and gender-card slurs. In this, the “year of the scary clown,” here we find the scariest clowns of all. The people who truly believe that leftists will cut them slack for abandoning Trump represent a rare combination of stupidity and reality detachment. They are indeed rats, and, may I add, rats that absolutely deserve to drown.

No conservative or Republican is going to win points with the left by abandoning Trump. Come the next election, every GOP who made a big show of condemning the bigoted misogynist in the race will themselves be portrayed as the bigoted misogynist in the race. If you are a conservative or a Republican, you are a genocidal, woman-hating racist. Even if you are soft on social issues, you become Hitler the moment you propose cutting one dollar from an entitlement program. To the left, Eisenhower Republicans are as evil as Reagan Republicans, who are as fiendish as Trump Republicans. You cannot win, you will not be given a pass. Your public show of prostration is for naught. The left is amused but unmoved by your act of nobility.

Allow me to illustrate that point with an anecdote from my past.

During my years running the Republican Party Animals organization, we had a hanger-on, a little-known blogger who haunted the periphery of the Tea Party movement, who would often attend our events. His name was Eric Golub, and he was pretty much your garden-variety Jewish neocon (the kind with very selective piety…as in, he”ll sit shiva for the pig that died for his ham sandwich). Average writer, average intellect, but inoffensive enough to be tolerated. Right before my “outing,” I was in the process of helping him arrange a book-signing event for his latest self-published tome. I hadn”t read his books, but there was no reason to deny him a table and a few minutes of talk time at my next event.

And then I was outed, and Golub realized that in the course of 24 hours, I had become Hitler (as one of my friends joked at the time, “Cole/Stein must have been cleverly hiding the little mustache under his larger one”). Golub took to his blog to denounce me in full fury. Before he did, he explained his actions to the members of the official, “secret” Republican Party Animals Facebook group (which at that point I had left and turned over to other admins). If we don”t make a big show of attacking Cole, he reasoned, we might look bad. “If we try to bury this it looks like we are making excuses for one of our own Republicans,” he wrote in a post to the group. In essence, his point was, if we don”t take the lead in destroying Cole, the left might tar us as genocidal bigots. But if we make a big show of how fair we are, how we”re willing to take down one of our own, we”ll get a pass.

Golub was beaten to the punch by The Guardian, which ran with the story first. But that didn”t deter him. He went running to the press (and to his own blog) to denounce me as “pure evil,” a Jew-hating Jew, a monster with a “nasally voice” (Golub was, as always, mistaken; my voice is gravelly, not nasally). Again and again, he stressed that he and his fellow Republicans had no idea about my past, and now that they”d learned of it, they wanted all the world to know how strongly they despise and condemn me.

By all basic human logic, Golub’s gambit should have worked; leftists should have responded by saying, “Well, on this one we”re in agreement; good for you for stating your revulsion so strongly and clearly.” But leftists don”t operate on basic human logic. They have their own prime directive, and their own playbook for pursuing it. Sarah Jones, of the popular “progressive” news site PoliticusUSA, responded to Golub not by thanking him for being such a good, decent, fair, nonbigoted chap, but by slamming him for attacking a Jew (me!). This is a moment of unparalleled beauty in the annals of the real-life Tom and Jerry cartoon that defines American left/right politics. A conservative tried to prove how not anti-Semitic he is by ruthlessly destroying a Jew who had been exposed as a (from Golub and Jones” perspective) Holocaust-denying self-hating Nazi, and a leftist responded by calling the conservative a bigot for attacking the denier.