The Hunt for the Right Wing Snipe 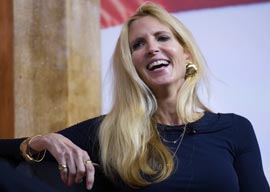 “I was never a true believer, but the money was good.”

When I started writing about politics and hanging around with conservatives, I started hearing leftists say the weirdest crap.

Stuff that stank of desperation, like some dough-bellied comb-over”d dude trawling a mail order bride site.

You know what I mean:

If you”re Canadian, you”ve been hearing for most of this century that Conservative Prime Minister Stephen Harper is a racist “Dominionist” Christian with a “hidden agenda” and that any day now, the country will transmogrify into The Handmaid’s Tale.

In actuality, the PM’s spittle-spraying critics “ rather like TV’s Bigfoot Hunters or those cranks camped on the shores of Loch Ness “ believe far more devoutly in Harper’s Christianity than he’s ever seemed to. His real “religion” appears to have something to do with hockey and cats.

“The guy’s doubled our Muslim population since 9/11 and/yet his Jewish voter base gets bigger every year.”

Even the Soviets quickly realized that their go-to cartoon insult “ sticking a cowboy’s Stetson on every president’s head “ didn”t work with JFK. But Canada’s progressives? After three elections, they still can’t admit their “Harper with devil’s horns and/or fangs” drawings have clearly had a less than devastating effect on voters.

Look: The guy’s doubled our Muslim population since 9/11 and/yet his Jewish voter base gets bigger every year. Plus I have yet to be fitted for my government issue ankle-length skirt.

Meanwhile, south of the border: Ann Coulter and Rush Limbaugh are many things, good and bad, but she isn”t “stupid” and he isn”t “loud.” But to leftists, right-wingers are all stupid and loud, and Coulter and Limbaugh are the only ones whose names they know. Think of the three-year-old who points at every animal and yells “moo!”

More pernicious, though, is the left’s persistent suspicion that Coulter, Limbaugh, and conservative people I know (and even me) “don”t really believe that stuff and are just saying it for the money.” Gavin McInnes soundly bitchslapped that notion here, but I usually go further:

First off, that’s the kind of thing people who don”t have any money always say. They”re super confused about how cash is acquired, which is why they resent those like Limbaugh who”ve managed to get any.

For almost 25 years, five days a week for three hours a day, Rush Limbaugh has monologued, mostly guest-less, on live radio to a national audience. Think about it: If he doesn”t really “believe that stuff,” then he’s arguably more deserving of that $40 million a year because let’s see you do that.